They can force them to convert to Islam but they can’t win their hearts! 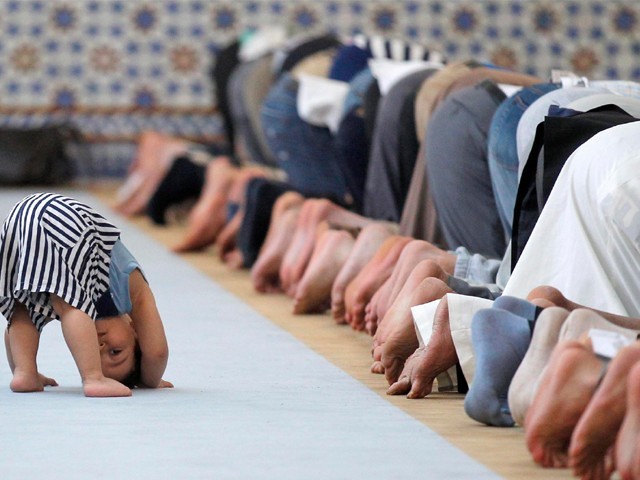 I find it odd how some Muslims break multiple rules of their own faith and yet, maintain a ‘holier than thou’ attitude simply because they pray regularly. PHOTO: REUTERS

As an expatriate boy growing up in Saudi Arabia, I dreaded attending my school’s mandatory afternoon prayer session. At the end of every long day in Manarat Al-Sharkia, all the Muslim students and teachers gathered before the final two classes to offer Zuhr (noon) prayers in the school’s stinking gym that carried a rancid air powerful enough to rival Hitler’s infamous gas chamber.

By prayer time, the gym’s floor had already been saturated by the sweet-smelling sweaty socks of hundreds of young perspiring boys. Thankfully, the school management realised that the gym’s surface was probably host to a number of diseases that would confound scientists everywhere and hence, covered it with enormous prayer mats made of plastic straws.

Unfortunately, these prayer mats hadn’t been washed since the 1969 moon landing and after being walked over on a daily basis by stinking feet, they were hardly ideal for facial contact. In fact, they smelled so foul that whenever my face came into contact with them during sajdah (prostration), I was convinced my nose would decay away, leaving me looking like Skeletor.

Every student was aggressively encouraged to perform wudu (ablution) before performing prayers. Try to imagine this scenario – countless sweaty boys crowded in washrooms which were damp with sweat mixed with water. Since most of these students didn’t want their friends to die of biological agents (this was during the Gulf War and we were waiting for Saddam to do that), they avoided taking their socks off during wudu and instead, simply passed their wet hands over them.

What’s more, some of them chose to walk on the wet restroom floors without their shoes. Of course, this only made matters worse.

Once the mass wudu had been performed, we all gathered in the teeming gym so that the whole building smelled like Martha Stewart’s worst nightmare. Of course, there were some students who tried to hide under desks in classrooms or on the roof but they were invariably found and dragged by their ears quite unceremoniously to the gym by bald, overweight teachers with thick, bushy hair on their arms.

I remember this clearly because as I was being pulled away from my hiding spot one time, I made a mental note of how my math teacher probably wished his rich body hair was on his smooth, bald head instead.

I also remember that although I was barely in my teens, I wondered why our prayer room smelt so disgustingly putrid when in Islamic Studies classes we were taught that Muslims must be an example of good hygiene, wear clean clothes and be in a spotless environment during prayer.

Of course, our school management was too busy force feeding religion to us to consider the contradiction of their ways. Unfortunately, this experience at Manarat Al-Sharkia – which ran from my childhood into my late teens – was but one of the many contradictory behaviours in the Muslim world that I see even today.

I find it odd how Muslim men break multiple rules of their own faith, and yet, maintain a ‘holier than thou’ attitude simply because they pray regularly. I also find it perplexing when an obese Pakistani scholar with curry stains on his clothes preaches religion so heatedly on TV, while clearly ignoring the fact that Islam encourages good hygiene and discourages eating and drinking excessively.

Why does religion for these men begin and end with the tenets that are the easiest to follow?

It is then not very surprising that a recent report about at least a thousand minority girls forced into marriage with Muslim men in Pakistan has flown under the radar of the public eye. These Christian and Hindu girls were abducted and then left with no choice but to convert to Islam. Not only were these young girls– some as young as 12 – mentally abused, they faced sexual abuse as well.

Considering that these young women are now Muslim by name since they did not convert willingly, it seems that there were darker motivations in forcing them to give up their faith. Do these abusive men believe that by forcing their victims to become Muslim they are justified in their actions?

It is disturbing on so many levels, especially, since this behaviour contradicts the teachings of the very religion these men are converting their victims to.

And then comes the all too familiar matter of the Council of Islamic Ideology’s (CII) recommendation that the minimum age for marriage be modified in Pakistan so that minors can lawfully have nikkahs. Why is the CII always making headlines for rulings that could be manipulated by those with evil intentions?

There are so many social issues in Pakistan that the CII could actually help resolve in a positive manner such as bonded labour, poverty, extortion and unemployment. And yet, the moral police of the council is more concerned with allowing men to marry younger girls, and that too without the permission of their first wives.

Are these really the most pressing issues the CII can aid Pakistan in?

But as much as we blame the CII, perhaps, what is even worse is our apathy. The case of forced minority marriages reminds me of Heath Ledger’s Joker meme that has been floating around on the internet. In our own country, thousands of minorities are being forced to convert to another religion while no one bats an eye; yet, if a few hundred Muslims had been forcibly converted to Christianity in the West we would have been losing our minds.

Sadly, far too many Muslims have little appreciation for the finer points of their own religion and try to force their ways on others without giving it due thought. I am sure that had my high school simply created a peaceful and hygienic prayer environment, most students would have entered the prayer room quite happily and willingly.

Similarly, by forcing religious minorities to convert to Islam, these men aren’t creating good Muslims – they are giving rise to unhappy Pakistanis instead.