Don’t equate the United Baloch Army with the Taliban! 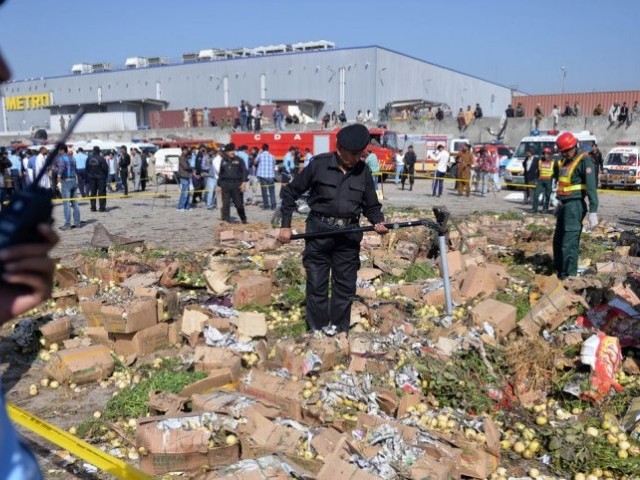 This has been the second such attack carried out by the UBA in the last few days, killing over a score of 24 people. PHOTO: AFP

Wednesday April 9, 2014. 8 am. Islamabad I-11’s fruit market. A blast rips through the usually quiet federal capital morning. Over two dozen lives lost. Everyday news in everyday Pakistan. The only difference? The attack was not claimed by the Tehreek-e-Taliban Pakistan (TTP) or one of its various splinter groups.

It was claimed by the United Baloch Army (UBA). This has been the second attack of its kind carried out by the UBA in the last few days. The first one took place at a train station in Sibi, Balochistan, killing 17 people.

While in the last few hours the government has rejected the UBA’s involvement in the attack, we can expect the story to take some more twists in the coming days.

Ever since news of the attack hit the airwaves, there has been condemnation, rightfully so, from all angles. What has not been right however, is putting the TTP and UBA on the same page. While such cowardly acts of inhumane brutality cannot be supported by any civilised person, using similar charge sheets against both TTP and UBA not only reeks of historical ignorance, it showcases how not knowing the facts can lead to a perpetually misinformed pseudo-intellectual mind set.

These are the facts:

The TTP is part of al Qaeda’s global philosophy that wants to establish Islamic Emirates across multiple countries. The Baloch on the other hand, are not part of any global ideology. There have been multiple struggles by the Baloch for autonomy and self-determination in the past. Issues began with the princely state of Kalat in 1947, when insurgents rejected the decision to accede to Pakistan. The king of Kalat originally chose independence, but was later forced to join Pakistan against his will.

Then came the one-unit policy launched by Prime Minister Muhamad Ali Bogra in 1954 which effectively slashed government representation for Baloch tribal leaders. What followed was armed resistance by Nawab Nowroz Khan and his followers, culminating in the Hyderabad conspiracy case.

In the 1960s, the federal government sent in the army to create new military bases to curb any future rebellions. The Baloch again resisted via arms, this time led by Sher Mohammad Bijarani Marri, with their primary goal being revenue sharing from the Sui Gas fields.

In the 1970s, the National Awami Party (NAP) came to power in Balochistan. It was dismissed by Zulfiqar Ali Bhutto after the apparent discovery of arms in the Iraq Embassy in Islamabad, something disputed to this day. Relations between Iraq and Baloch were close, and went back to the 1950s.

Then came the 1980s and Ziaul Haq patched things up with the Baloch insurgents, throwing the Hyderabad conspiracy case down the trashcan and releasing all 55 people including Mir Ghaus Bakhsh Bizenjo , and offering them federal ministries in the process.

The 1990s went on smoothly. Things took the bloodiest of turns in 2006 when the Pakistan Military committed its biggest blunder post 1971 – Akbar Khan Bugti, ex-governor and ex-chief minister of Balochistan, was killed in an army operation.

What ensued next was the Baloch Separatist Movement’s most militarised period. This was the first time the Bugti, Mengal and Marri tribes, all came together to revolt against Pakistan, launching the strongest Baloch Nationlist Movement yet. What started out as a simple nationalist narrative in specific areas has now expanded to the whole province. While Ghaus Baksh Bizenjo was open to dialogue, the new Baloch resistance leadership has explicitly ruled out that option. It started out as a struggle for autonomy alone but has now taken an ethnic turn.

Military resistance should not be supported at any cost, but what needs to be considered is the history behind military resistance and how things have piled up, one after the other, to develop into a boiling pot of completely justified anti-state sentiments in Balochistan. While things have taken an unwanted ugly turn in the last few years, the blame lies squarely on the state of Pakistan for creating the mess Balochistan finds itself in.

The grievance is justified.

The anger is justified.

The frustration is justified.

The outlet, however, is uncalled for.

You have the long march, you have the missing persons, but after 77 years, has anything changed?

After 77 years, have things taken a turn for the worse?

Innocent lives should not be lost. It is the gravest of crimes known to humanity. But equating what started out as a movement to gain promised rights with a movement aimed at enforcing Shariah by the bullet is stupidity in its grandest, most prominent of manners.

Pakistan’s biggest province is home to the smallest share of resources for a reason. And it is not because it wants an Islamic Emirate. It just wants what it was promised in 1947.