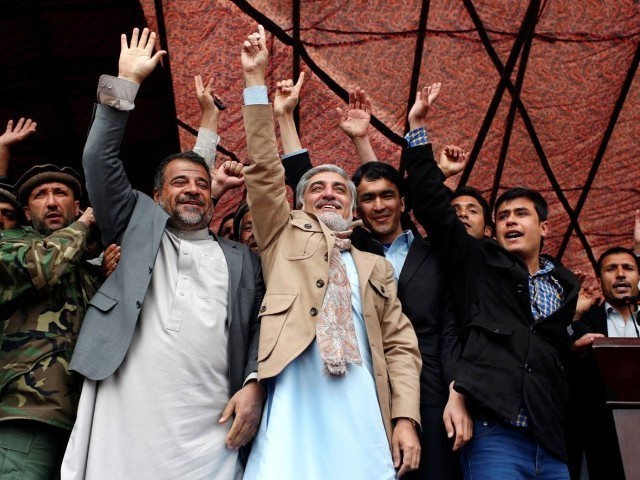 I believe Abdullah could be a transformational leader for Afghanistan. PHOTO: REUTERS/FILE

As I am writing this, the people of Afghanistan have already casted their votes in what is arguably the most important election in Afghanistan since the fall of the Taliban regime in 2001.

The whole world’s eyes are fixated on the upcoming results, which will be announced on April 24 and finalised on May 9.

So I also asked a friend from Afghanistan which candidate his family voted for and he replied,

“Of course, they voted for a Pashtun because we need a Pashtun leader. After all, Pashtuns constitute the majority of the Afghan population.”

In fact, all eight candidates in this presidential run are from majority Pashtun ethnic tribe except Dr Abdullah Abdullah, who is half Tajik and half Pashtun. Although, Pashtuns make up almost half of Afghanistan’s population but the non-Pashtun groups such as Hazaras, Uzbeks and Tajiks also represent an important force in the country. Yet, none of the important figures from these groups are standing as presidential candidates.

This essentially means that in this political landscape, divided along ethnic fault-lines, the run-off candidates would have to rely on the support of local warlords and their own ethnic allegiances. In such a scenario, the most likely outcome will be that the leading Pashtun contenders, Ashraf Ghani Ahmadzai and Zalmai Rassoul, will be uniting against Abdullah to force him out.

But does Afghanistan, at this crucial juncture, really need a Pashtun leader?

I personally do not believe so.

There are essentially two underlying factors that continue to uphold the future stability in Afghanistan; one that the leader that is inclusive (Pashtun) and two, that his mandate is according to ethnic lines.

Firstly, given the perilous economic and security situation, the crux of internal stability in Afghanistan depends on how legitimate the future government is going to be. During the 2009 elections, when President Hamid Karzai claimed to have won the Pashtun vote in heavily rigged elections, the non-Pashtuns refused to recognise his legitimacy. It was only after US mediation that Abdullah, a runner-up candidate, stepped down.

It is therefore of paramount importance for Afghanistan’s internal stability that these elections produce a credible president who represents and is accepted by both, Pashtuns and non-Pashtuns, alike.

Secondly, part of the peace settlement in Afghanistan has to be a regional settlement with neighbouring countries. Historically, each of its neighbours has used Afghanistan as a proxy to fight their own wars. Pakistan will push for a Pashtun to be in the ‘driving seat’ in Kabul, while India and Iran consider the Northern Alliance to be more amicably disposed towards them. The regional pursuit for their favourites in Kabul and the diversity of views that shape the Afghan society’s perception towards each of these neighbours also entails a leader who acts as a reflection of the mosaic nature of the Afghan society; someone who is ready to restrict foreign interference in Afghanistan’s matters.

Someone like Abdullah who represents various ethnicities, not just the dominated Pashtun ethnicity, could capitalise on geo-strategic locations and cultural affinities to promote better relations with all the neighbours. In return, these ‘allies’ would also have an incentive to cooperate not only with Afghanistan but also with each other for regional peace and stability.

Keeping these perspectives in view, I believe Abdullah could be a transformational leader for Afghanistan.

Born to a Pashtun father and a Tajik mother, he served as Afghanistan’s Foreign Minister from 2001 to 2005. In the 2009 elections, he lost against President Karzai. As a staunch critic of President Karzai’s policies, especially the corruption charges, dialogue with the Taliban, Abdullah’s hard-line approach against the Afghan Taliban and his own diplomatic credentials have earned him a particular appeal in Western capitals.

But, if Abdullah wins and the Afghans people accept his legitimacy, this will surely be the beginning of a new chapter of peace and reconciliation in Afghan history.

However, the critical question still remains – will a non-Pashtun minority ruling a Pashtun majority in Kabul ever be accepted? Will Afghanistan allow progression to take its course?