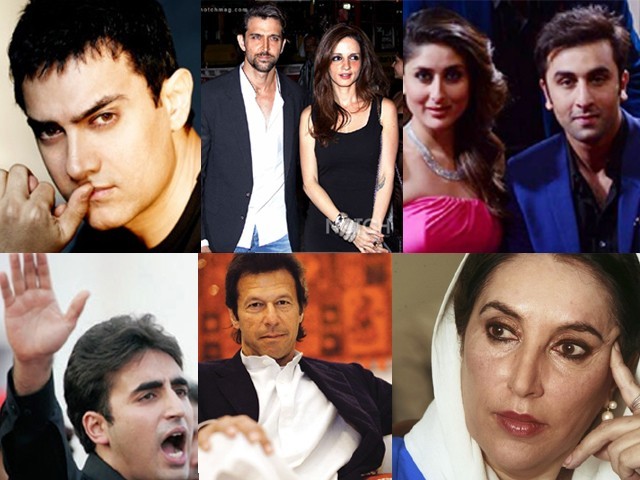 Whether it is Bollywood or Pakistani politics, both are always in the attention of the media. A Bollywood actor would so much as sneeze and the media would probably report it as ‘breaking news’.

It won’t be a lie if one were to say that both, Bollywood and Pakistani politics have become extremely commercialised. While the former is an industry and the latter is a system, both have experienced success in recent years.

This automatically means that the people who are a part of either are found to be thriving monetarily and enjoy basking in their fame. Here are a few similarities between the two:

You have the legendary Kapoor family which has been involved in the film industry for almost 85 years. The chain started from Prithviraj Kapoor, who was the first from his family to pursue acting as a career. He was followed by his sons, Shammi Kapoor, Raj Kapoor and Shashi Kapoor. Then, Raj Kapoor’s sons Rishi Kapoor, Randhir Kapoor and Rajiv Kapoor entered the world of film.

Randhir Kapoor was succeeded by his daughters, Kareena Kapoor and Karisma Kapoor. And of course, nowadays most of us – especially the ladies – are fans of the charming and handsome Ranbir Kapoor who happens to be Rishi Kapoor’s son.

Although perhaps not with such a long legacy in the film industry, other families like the Bachchans, the Dharmendras and the Jitendras are also prominent examples of this succession.

Lineage and succession play an important role in Bollywood films and Pakistani politics.

Now if you take a look towards Pakistan’s political arena, you will find a similar scenario.

Sir Shah Nawaz Bhutto was an eminent personality in the colonial government of India. His son Zulfikar Ali Bhutto followed his footsteps and became a politician and a nationalist. Zulfikar’s children – Shahnawaz Bhutto, Murtaza Bhutto and Benazir Bhutto – followed in his footsteps and entered politics. And now, Benazir’s son Bilwalal Bhutto Zardari is making his foray into the political world.

Similarly, the Sharif family, Bhugti family and Khan Abdul Wali Khan’s family are all examples of family politics in Pakistan.

We all know that Bollywood actors have millions of followers all over the world. Even a flop movie is bound to have some Indian, and maybe a few international, fans. Many Indians treat some of the Bollywood actors like gods; case in point is Amitabh Bachchan who has a temple in Kolkata where prayers are performed for his health and prosperity.

In Pakistan, politicians have seldom fulfilled the promises they made to the public and yet, they have countless jiyalas (followers) who claim that they would die for their parties. Although these die-hard supporters can be found in cities, this ‘blind following’ tends to increase the more one goes into the country’s interior or rural areas.

Although Bollywood has and continues to produce melodious and catchy numbers, not all their songs are always pleasant. In fact, some songs are downright vulgar and preposterous. Take for example, the lyrics of the item song from the film R… Rajkumar which go something like this,

(When the pumpkin will be cut, it will be distributed among all…)

Seriously? A song about a pumpkin? What were they thinking?

This brings to mind a song from the movie Agent Vinod with lyrics that were completely inane,

(After playing the pipe of love…)

Whether it is Bollywood or Pakistani politics, both are always in the attention of the media. If a Bollywood actor would so much as sneeze and the media would probably report it as ‘breaking news’. When Aamir Khan’s wife gave birth to their son, the Indian media quickly brought it to the limelight and the Times of India ran the news with the title,

“Aamir Khan, Kiran get a son through IVF, surrogacy.”

Screen grab from Times of India

Then, when Hrithik Roshan and his wife, Susanne Khan were going through an estrangement, the media’s watchdog kept a close eye on the couple’s life. The International Business Times even ran a news item,

Because, yes, that is exactly what the ‘business scenario’ in India looks like.

Of course, we are well aware of the high level of media hype which our politicians receive. Only recently, some politicians were said to hold fake degrees and Dawn newspaper published a report titled,

And of course, when Shumaila Rana of the Pakistan Muslim League-Nawaz (PML-N) was accused of purchasing jewellery via a stolen credit card, most Pakistani news channels covered this news.

I don’t know about you but sometimes when I’m really craving a Bollywood movie but don’t have three hours to spare for the melodrama and song-and-dance routine, I just watch 30 minutes of a Pakistani political talk show. And believe me, at the end of that half an hour, I’ve had my fill of drama, songs and parampara (traditions)!

A writer, blogger, stand-up comedian, and a student in the final year of Bachelors of Commerce.

Would Batman be able to survive in Pakistan?