We should have seen it coming… 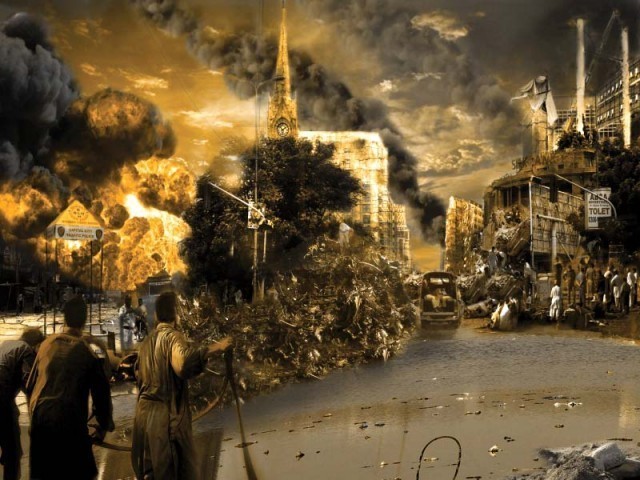 The city was exposed to lethal radiation and the survivors went through excruciating pain before eventually dying. Those that died on the stop were considered ‘lucky’. PHOTO: FILE

In hindsight, I suppose we should have seen it coming.

Karachi had been a great city, once called the Queen of the East, but for a long time now it had become unlivable, given the daily killings, terrorist attacks, the rampant looting of pedestrians and motorists by armed gangs.

We should have seen it coming.

The city was the most highly taxed in the country, but no one knew what happened to the hard-earned money we gave as tax. It was widely believed, though, that our corrupt rulers were siphoning away most of the budget amount into their foreign bank accounts. Many industries had been shifted to other cities and some factory owners even migrated to other countries, taking their machinery with them.

That is when we should have seen it coming.

I remember how the public protested when the government decided to set up nuclear power plants on the seashore, very close to a fault line which, according to geologists, made Karachi prone to moderate-to-intensely-strong earthquakes. In fact, there had been a strong earthquake and a tsunami in 1946, but this was ignored by the government.

Nuclear experts had warned, correctly, that in case of an accident in the power plants, the residents of Karachi would die horrible deaths and that the survivors would not be able to live much longer either.

Shouldn’t we have seen it coming?

Then there were the coal-fired power plants that emitted thick smoke that enveloped the city and ultimately resulted in acid rain, which then led to the corrosion of agricultural fields, the only source of food supply for the city. The scarcity of food raised prices so much that about a quarter of the city’s population perished of hunger. Riots for food resulted in the death of many more and things kept going from bad to worse, and residents were often scared to venture out of their houses.

A deathly virus spread, and since most of the inhabitants lived in crowded and cramped houses, it took the lives of millions within days. The rulers had not spent much on health and hospitals, and so there were very few doctors at hand to treat those who were sick.

And then began the tremors. At first the earthquakes were mild, resulting in huge cracks in high-rise buildings. The government set up a committee to determine why the buildings were not able to withstand even mild tremors, and it turned out that although Karachi has a Building Control Authority, most of its employees existed only on paper and were called ‘ghost’ employees, though they were pretty real when it came to collecting their salaries.

This, by the way, was true of most the employees working in the Sindh government (or the Sindh ‘non-government’ as some liked to call it pertaining to the fact that no one had ever been able to find any shred of evidence that our leaders even knew the very meaning of the word ‘governance’). Then one fine day, after another earthquake, a dam collapsed and this was followed by an explosion in the one of the nuclear plants, which the government had been warned about. The city was exposed to lethal radiation and the survivors went through excruciating pain before eventually dying. Those that died on the spot were considered ‘lucky’.

And yet, we didn’t see it coming?

A few days later came the deathblow – the tremor that really shook Karachi, with its epicentre right underneath the city. It was this, and perhaps the tsunami that followed that brought Karachi down to its knees. The few buildings, that were still standing, came crumbling down, sea water entered the city, flooded roads and soon acres of land were under water, drowning the very last of men.

And then it came… the end…

And so, the Queen of the East, which had managed to survive against all odds for so long, finally saw its end and Karachi city ceased to exist, becoming just another chapter in history text books for children to read in times to come.