Queen: Healing does not come in the arms of another man, Ladies! 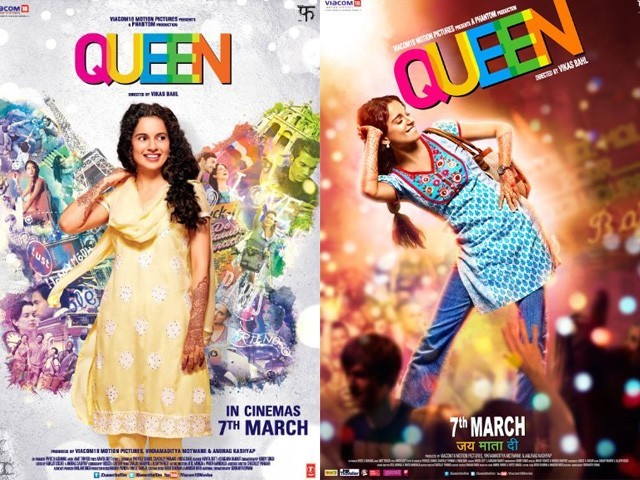 The movie emits a profound lesson by deconstructing our so-called social structure and subverting the delegated social roles. PHOTO: IMDb

“I also want to do something in my life”

Rani says in a wishful voice to Alexander. He replies to the bewildered girl,

“So who is stopping you?”

This dialogue pretty much sums up the essence of the movie ‘Queen’.

The barriers and restrictions holding us back in life are mostly the constructs of our own mind. Vikas Bahl’s ‘Queen’ is not a very novel perception of abandonment and coping with it, but there are a few moments in the movie which make the experience worthwhile.

Queen, being a low budget film, has grossed almost $10 million in three weeks, without any male lead or flashy marketing campaigns promoting it. The movie became popular based purely on word of mouth and that exactly is how I came to know about it, when all my friends were recommending it and celebrities like Ranbir Kapoor applauded and praised it as ‘perfect’.

Rani’s (Kangana Ranaut) controlling fiancé Vijay (Rajkummar Rao) cancels the wedding at the last moment on the pretext of her not being a suitable match for him. Broken hearted, she decides to go on her honey moon trip alone. The narrative is predictable without any twist and turns, without much excitement to offer but the journey of self-discovery and emancipation is certainly engaging.

We usually have a myopic vision of our problems and restrict our untapped abilities by giving the reins of our life in someone else’s hands. What if we discover that there is a world out there where these problems are trivial and there are unbelievable opportunities to explore, amazing people to meet and beautiful places to see? And that exactly is the experience which redeems Rani.

Imagine transforming your average girl next door into a modern, strong-minded and independent woman, and watch her mock the petty and meaningless restraints imposed by our society. How liberating would that experience be?

I don’t know why but while watching the movie, I was constantly reminded of the news we hear and read daily,

(Failure in love leading to suicide)

We are living in a gagged and constipated society where no counselling or awareness is presented to help the youth understand that life is far larger and beautiful than one heartbreak or domestic skirmish. Perhaps, such movies can provide that larger perspective which our society has failed to offer.

Rani does not breakdown into any melodramatic spells, does not burn pictures of her ex and does not act outrageously as is usually seen and depicted in such situations. Instead, she evolves smoothly with a positive perspective of life, making the narrative real and relatable. She doesn’t even spew hatred when Vijay comes back to her and instead thanks him in the end.

Every break up has some kernel of hope in it – the hope to move on as a better person, and we should certainly be thankful for it, all of it. The best part is that healing does not come from the arms of another man but from the compassion of friendship and realisation of independence.

The audience can relate to Rani’s flashbacks of her life back home, especially the driving scene, which all Pakistani women can relate to. We have all been mocked by men in general over our driving skills since they can never fathom the joy we get when we’re behind the wheel.

As the story unravels, she realises that the only thing holding her back is her own will to take control and that the moment she starts letting go, wisdom and happiness start pouring in.

Queen touches upon a very important feminist issue that we, as women, always see ourselves through men’s eyes and willingly let them define our existence. The movie emits a profound lesson by deconstructing our so-called social structure and subverting the delegated social roles.

Kangana has always gravitated attention with her intense screen presence and this time, her casual, comic performance has done the trick and brought her in the league of exceptional female leads like Vidya Balan.

Everything about this movie appeals to you and captivates you – the acting, the relatable story, the dialogues, the amazing cities explored, even the music. Unlike most Bollywood movies, the music and songs are not forced but timely queued.

Queen will make you laugh and cry at the same time. But most importantly, it will inspire you to reflect and not give in to the pain of heartbreak.