Agriculture is our golden goose; don’t kill her, my dear Industrialists 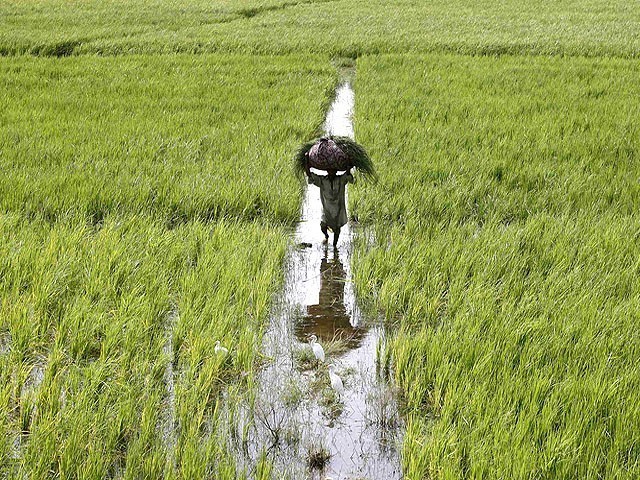 The urgency of filling an empty stomach somewhere is much more than giving someone their fill over and over again. PHOTO: REUTERS

The projection of economic growth as something evil, that benefits only the rich, is wrong. Even so, equally erroneous is taking the GDP number for a sacrosanct symbol of sure-fire prosperity for all.

Praise is due to the government’s economic team for various improvements in the macro-economy: five per cent growth in first quarter (Q1), about 10 per cent appreciation in the rupee within three months, and excellent performance of the stock market – all reflect recovery. Yet, how these gains are shared with the neediest of the needy remains to be seen – and only this should be taken as being an encompassing yardstick of success.

Historically, Pakistan’s economic policy has never been pro-poor. In the words of Stephan Klasen,

Leaving Zulfiqar Ali Bhutto’s 70s aside (who launched into a rather over-charged, rather self-defeating assault on poverty) poverty reduction was no government’s priority. Admittedly, PPP-governments were relatively more focused in this respect, but their lacklustre economic performance and unimpressive governance hit the poor from another window, namely, overall stagnation of incomes.

Yet our amoral approach to economics has hardly changed. The present government is living up to the impression it is known for – being the industrialists’ government. According to a State Bank of Pakistan’s report, industry and services grew by 0.7 per cent and 1.2 per cent more than their respective targets in Q1 for the financial year 2014 (FY2014). But the agriculture sector missed its target by 1.3 per cent and its growth was 0.2 per cent less than even the corresponding quarter last year. No floods, no earthquakes, no mishaps. Nevertheless, the agricultural production missed its targets.

Was this apparent industrial bias simply an irregularity? Not really.

This season – after the first quarter – farmers got the squeeze from sugar mills, where the official price for sugarcane was perceived as being unfairly low – same as last year. In addition, the sugar mills also made deductions of around 1000 kilograms (kg) per trolley on pretext of poor quality cane – which farmers find indeed a novel way to pay less for their cane. Hardly was any farmer exception to this general rule of katoti or deduction, since the cane was abundant and the buyer monopolistic. The sugar industry, as always, was allowed to act as the single buyer.

The wheat-support price, which was the farmers’ last hope for compensation this year, was also not revised. The previous governments have been revising the prices upwards every year; this government, however, came with a sharp change of mind.

This echoes a recurring shortcoming in the South Asian approach to economic development where agriculture and industrialisation were treated as if they were mutually exclusive. Growth in India, to state another example, did not ameliorate the state of farmers the way Chinese growth did, where growth and poverty reduction both were rapid.

East Asian countries, like Japan, South Korea, and Taiwan, engaged in aggressive export-oriented industrialisation, but with an equally high-spirited redistribution of resources. Agricultural policy complemented the industrial policy. Agrarian reforms included fair and stable prices, subsidised credit and technical assistance from the government, and redistributive and tenurial land reforms. These measures ensured a better deal for the farmers and steady growth of agriculture.

For the industry, in turn, the agrarian reforms secured a smooth supply of economical raw materials, but also a bigger domestic market for industrial products. As new buyers, who had graduated out of poverty, kept becoming part of the markets for comforts and luxuries, domestic demand for the manufactures increased. The resulting win-win situation had other spillover effects, as in better health and education. And a virtuous cycle came into spin.

There is no reason why this pattern of inter-sectoral complementarities cannot be emulated in Pakistan. Agriculture employs 45 per cent of the total labour force here. The rampant poverty, which is especially concentrated in the rural areas, makes the case for such pro-poor growth even stronger.

The recent multidimensional poverty report by Arif Naveed and Nazim Ali (2012) reveals that a third of Pakistan’s population remains poor, 21 per cent being under severe stress. However,

“Severe poverty in rural population is four times higher than in urban population”.

In addition, while only 18 per cent of urban households are poor, 46 per cent rural ones live in poverty.

The urgency of filling an empty stomach somewhere is much more than giving someone their fill over and over again. The policymakers need to strike a balance between the interests of the bottom 20% and the top 20. To think that supporting the rich industrialist class can bring growth on its own is an illusion that has failed us miserably in the past 66 years.

A graduate of the London School of Economics where he studied Political Economy of Development. He holds interest in Sufism, languages, alternative medicine, and farming among other as varied things. He tweets @Masood_U (twitter.com/Masood_u)

What happens when NGOs are not free from political influence?

'Metronomics' in Lahore: We may be heading for an 'F'