Don’t tell me to ‘stop being negative’ about Pakistani affairs 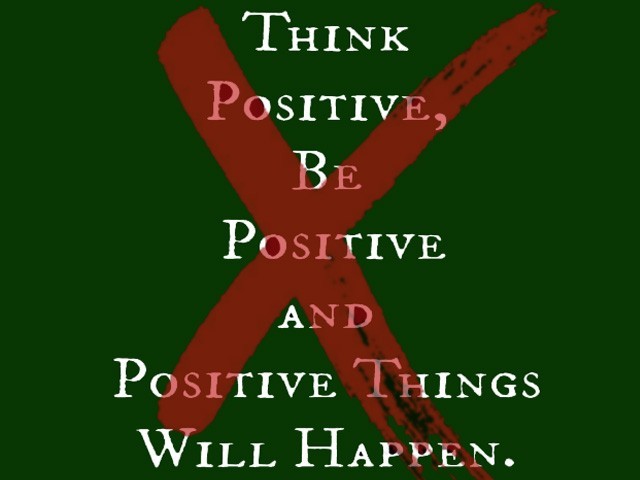 Zero revolutions thus far are attributed to people urging us to ‘stop being so darn negative all the time’.

I’ve lost count of the times I’ve been mocked for raging on the blogosphere about Pakistani matters. And many like myself have been repeatedly prescribed a ‘positive attitude’. These patronising suggestions need to stop.

One of the leading complaints against liberal writers and media outlets is that they allegedly ‘focus on the negativity’ and fail to provide sufficient coverage to the saccharine, more palatable details of our country. Such ‘positivity’ is the staple diet of nationalists who are easily irked by information of our national imperfection and the blessed opium of the ignoramuses who cannot conceive the astronomical depths to which we have fallen.

These are the ones who seek to calm the fires of Twitter over the burning of Hindu temples in Larkana and Hyderabad. They would rather have the newspapers report ‘Hindu temple still standing in Karachi today’, so we can clap our hands raw and get back to our positive living.

It’s the burden of any journalist, writer or responsible citizen to report on what’s dysfunctional first, from the Council of Islamic Ideology (CII) debacle to the attack on Raza Rumi, before gratifying oneself with news of things that are working fine.

Others would roll their eyes at your concern for the death penalty awarded to a Christian father of two – a verdict, it is averred, and that did not take the mitigating circumstances of the case into consideration. For the community of Christians, this is a fitting finale to the Joseph Colony tragedy that left 200 Christian homes destroyed, a church razed, and hundreds injured and displaced.

Way to stick a finger in the bullet-wound!

And when the minorities and their friends clamour on Facebook about the on-going injustices, it is not unlikely for someone to drop by and say something along the lines of,

It’s a blazing indicator of one’s absence of empathy; a sign that you either don’t see the tragedy as a big deal, or have completely failed to grasp what it means to the minorities and their future in this country.

Women are frequent victims of the rose-smellers. Feminists are written off as ‘too whiny’ when they talk of the society’s patriarchal attitudes and liberals are called ‘oversensitive’ when pointing out subtle but ubiquitous presence of bigotry. Unsurprisingly, the calls to ‘calm down’ come from the socially and politically privileged sections of the society that are having a hard time understanding what women and minorities go through nearly every day of their lives.

Though a mild-mannered person in real life, I’ve received numerous complaints regarding my political ranting on Facebook. Perhaps I ought to cool down and spend more time posting duck-faced selfies, pictures of my food, and hideously clichéd quotes about life and how to manage it. Oh, and put up the picture of a flower or my baby cousin as my display picture, because that’s a thing now.

Jinnah did not lead a march of Muslims focusing on what was positive in their lives. Zero revolutions thus far are attributed to people urging us to ‘stop being so darn negative all the time’. It is only when there is expressed unease about something that solutions will be offered to fix it.

Despondence and hopelessness may lead to self-destruction, but anger is the heart of change. And if you haven’t thrown furniture around the room at the knowledge of what’s been going on in your country, you haven’t been paying enough attention.