Yesterday was Raza Rumi, today it could be you 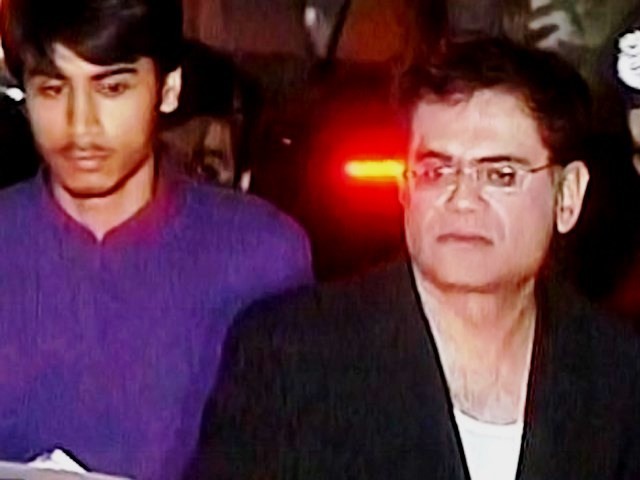 Yesterday they targeted Raza Rumi and ended up killing his driver; tomorrow it might be another journalist from another media group. And then, it might be you or me. Must we wait for that day? PHOTO: SCREEN GRAB AFTER THE ATTACK/FILE

I remember it was May 10, 2013 as I sat in front of my television waiting for the 9pm news bulletin. I knew what had been happening in my country for the last 20 days but I was still waiting for the news. The clock struck nine and the headlines came on,

Three political parties had been targeted by the Tehreek-e-Taliban Pakistan (TTP) while the rest had been given free passage to participate in the ‘un-Islamic election’ as they liked to call the general elections to be held in that month. These three parties and their workers were victimised while the rest of the country looked on as mere spectators.

I am no scholar, no intellectual and no defence analyst but it doesn’t take a genius to figure out what was happening in the country. We were being terrorised by the militants in an attempt to divide the nation. The militants were making an example of three political parties while sending a clear message to the rest that if they dared to move against the TTP, they would be made to suffer the same fate as those three parties.

The TTP knew it couldn’t stop the elections from taking place and yet, it continued to attack and victimise those three political parties.

Because stopping the elections was never their goal. All they wanted to do was make an example for the rest and they succeeded in doing so because the nation did stand divided at that time.

Every now and then Imran Khan and Prime Minister Nawaz Sharif would condemn the attacks but they never condemned the TTP. Every day I would watch the news bulletins, hoping against hope that other parties might dare to say something against the TTP but no one did.

They were afraid to call a spade a spade then and they are afraid to do the same now. No political party mustered up the courage to stand up and say,

“These three parties and their workers are also Pakistani and the TTP has no right to kill them.”

But no; they were probably relieved that the TTP was not targeting them. Unfortunately, our esteemed politicians did not understand the game then and they do not understand it now.

I don’t question the sincerity of Imran Khan or Nawaz Sharif and neither am I a fan of the Pakistan People’s Party (PPP), the Awami National Party (ANP) or the Muttahida Qaumi Movement (MQM) but I still believe that they are Pakistani and they deserved to be shown solidarity by other parties in the face of these attacks.

And now it seems like the TTP has decided to follow the same strategy on the Pakistani media.

One media house – the Express Media Group – has been repeatedly targeted by the Taliban while the rest live in their bubbles of denial, thinking that they will be exempt from such attacks. However, what they fail to understand is that the TTP has taken it upon themselves to make an example out of the group so that the rest are also terrorised into staying silent and not dare to portray the true image of these terrorists.

They saw how successful their strategy turned out to be during the elections and now they are applying the same on the media as well.  And shocking as it may be, no one from the media seems to understand their strategy either.

Attacks on the Express Group were reported by other channels using words like niji TV (private channel).

If this is not a lack of solidarity, what is? What wedge will the TTP draw between us when we aren’t united to begin with?

Instead of reporting yesterday’s attack on journalist Raza Rumi, in which his driver lost his life and the guard was critically injured, a few TV channels were busy reporting about Srinivasan and the Indian Premier League (IPL) since that gave them an opportunity to play an entire playlist of the latest Bollywood songs.

It’s as if we are fast becoming a nation that lives in perpetual denial. We act like ostriches and believe that as long as we look the other way (towards more pleasant happenings) the horror around us will cease to exist. While this may be a justifiable outlet for the common person, it is a shameful act when performed by politicians and the media – the very people whom we rely on to face problems head-on and look for solutions.

Even in a war-ridden country like Afghanistan where the literacy rate is much lower than in Pakistan, all the journalists and media houses boycotted covering the Taliban for 15 days after the death of one of their colleagues. However, in Pakistan where so many journalists have been killed by the Taliban, our media not only reports about them, it often unnecessarily glamorises them.

How many more attacks do we need to be subjected to in order to understand that this is not just one person’s, one party’s or one group’s war?

How many more attacks will it take for us to understand that they are using us against each other?

How many more will have to die for us to understand that ‘united we stand and divided we fall’?

When will we understand that in their fight to obliterate our culture, our identity and our religion, these terrorists will remove everyone who comes in their way?

Yesterday they targeted Raza Rumi and ended up killing his driver; tomorrow it might be another journalist from another media group.

Must we wait for that day?

A sophomore at NUST,an observer,critic and a patriotic Pakistani, he is interested in world affairs, especially of the Af-Pak region and tweets as @Bilal48Anjum (twitter.com/Bilal48Anjum)

You have to risk it to get the biscuit, Team Green!