The rise of the rupee: A politically potent economical stupidity 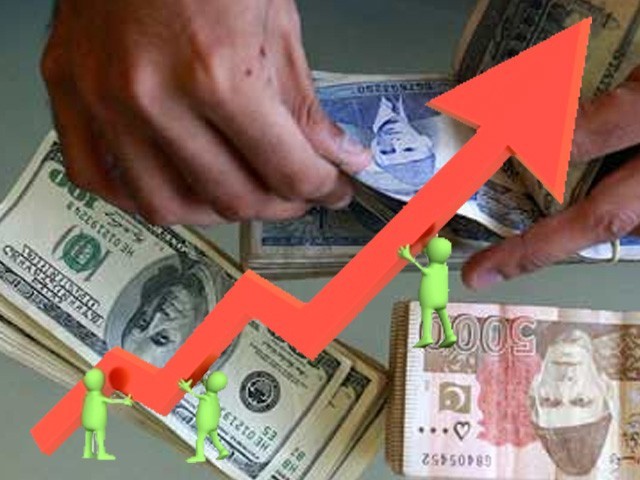 Would the rise in the rupee make our debt payments easier?

Last week I received a call from a friend in Karachi.

“What is going on with the dollar?! Should I buy dollars? Why is it falling like this?”

My answer was simple.

“The dollar isn’t falling; it’s the rupee that is rising.”

Difference is its implication.

Hailing from a regime that had made promises of ending load shedding within 90 days of coming to power, the fact that Finance Minister Ishaq Dar made good on his December 2013 promise to bring the dollar down to Rs98 deserves an applause.

While those who consider the currency exchange rate as something of a competitive sport where appreciation of the rupee is something to celebrate, then fantastic; Ishaq Dar should continue doing whatever he has done. But those of us who can appreciate the fact that fluctuation in foreign exchange markets have economic implications, a deeper analysis is needed.

To understand this better, let’s look at how the rupee was made to rise in its relative value.

During his speech, the minister called on those who have dollars in possession to quickly cash in because he warned of losses when the rupee would rise. This led to the speculative selling of the dollar. The government further aided this measure by bombarding the markets with the $1.5 billion received as a ‘gift’ from Saudi Arabia. The simple principle of supply-demand prevailed and the dollar dropped.

This was further abetted by the fact that major debt payments for March 2014 had already been made. Speculations of the US releasing Coalition Support Funds and the release of funds from the Asian Development Bank as well as the World Bank caused the rupee to rally further in the market.

Now you may ask, what’s the problem?

Wouldn’t the rise in the rupee make our debt payments easier?

Wouldn’t it even make our fuel cheaper?

The problem is that the way that the rupee was artificially made to appreciate is not sustainable. Gifts, known in economics as unilateral transfers, are windfall profits as they are not a continuous stream and therefore their impacts are likely to be a one-off event. If the government had actually not allowed the funds to come into the Pakistani foreign exchange market and instead used it to buy foreign bonds, they could have been a steady income earning source as well as security for the treasury.

The drawback of what the government did is that without further funds coming in, if they push up the rupee, speculators and traders will do what they do best and start betting against the rupee and cause it to depreciate in a relatively short span of time.

Just a few days ago, some currency exchanges in Karachi and Lahore were demanding Rs104 per dollar.

The reason for this is that rise of the rupee was indeed artificial for political gains. None of the economic indicators needed to organically appreciate a currency have changed in Pakistan. In fact, the rapid fluctuations in the currency are detrimental to inviting foreign investments in the country. It’s a sign of instability.

Yes the depreciation of dollar would mean the immediate lowering of our import bill, which would mean cheaper petrol at the pumps. But Keynesian economics teaches us that in the short-term, prices are ‘sticky’, meaning that for an event such as a sudden rise in rupees value to have an impact on prices it has to be a maintained over a long run. On the contrary, artificially depreciated rupee makes Pakistan’s immediate imports more expensive giving rise to domestic inflation.

The economic issues being faced in Pakistan are multifaceted and there is a dire need for the government to shore up the fundamentals. Policies that boost exports and encourage foreign direct investment are the ones that will create the jobs so badly needed. Short term measures like intervening in the foreign exchange market and youth loan schemes may look good on the headlines but they do little to better the lives of the masses.

For some inexplicable reason the mantra for ‘trade not aid’ seems to be reserved for dealings with the US and EU while the government is perfectly content with charitable gifts from the Saudi’s.

A freelance journalist currently pursuing a Masters degree from the University of Pittsburgh's Graduate School of Public and International Affairs specialising in International Political Economy. He tweets @asifhasansheikh (twitter.com/asifhasansheikh)

Election day tips: Be prepared, there is no separate line for the rich

Palestine: The audacity to hope

Reporting on Gaza is about keeping the viewers at peace