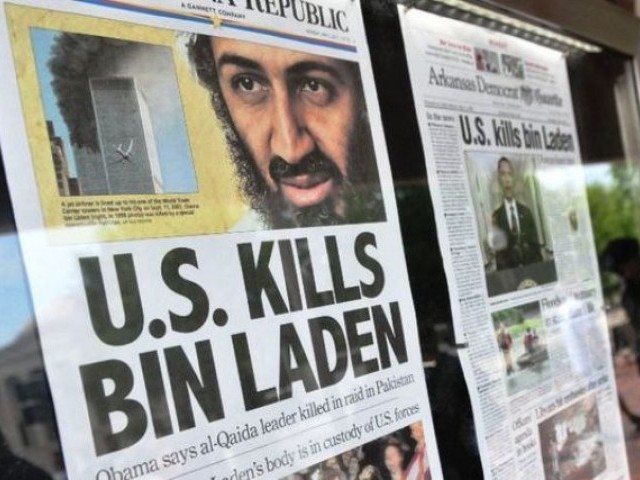 Perhaps if Washington DC was able to provide significant proof in order to place blame on Pakistani authorities, Gall’s article would have been a more effective read. PHOTO: AFP

In her most recent article in The New York Times, Carlotta Gall, has shunned the Inter-Services Intelligence (ISI) and military establishment of Pakistan in an attempt at assessing the troublesome relationship between Pakistani institutions and Islamic extremists.

The article titled “What Pakistan Knew About Bin Laden” explicitly accuses the ISI of harbouring Islamic extremists for its own selfish reasons, with a special mention of Osama bin Laden who she believes had been under the protection of the ISI until he was killed during the raid on his compound in Abbottabad in 2011.

Considering the blatancy with which Gall points fingers in her writing, it is no surprise that the article had been censored in Pakistan and the local print copies of the paper appeared with a large blank space on their cover page. The censorship of the article has created an international reaction to the undemocratic ways in which Pakistan frequently curtails freedom of speech and expression. However, whether accusations such as those made by Gall in her article should be allowed to malign the reputation of sovereign institutions in Pakistan, without any proof of truth in them, creates room for questions as to which one of the two parties are in the wrong.

Even three years after the death of Bin Laden, heaps of unanswered questions continue to pile up about the circumstances in which he was located in Pakistan; no substantial proof has been uncovered that can be used to implicate the ISI and yet Gall does. In an article by Peter Bergen, CNN’s National Security Analyst, he responds to Gall’s accusations by writing,

“If the US government had any evidence that the Pakistanis were knowingly sheltering bin Laden, as Gall claims, why cover this up?”

In saying this, Bergen brings up an excellent point.

If the United States is convinced that Pakistani authorities played an active role in sheltering Bin Laden, they should provide concrete evidence in order to help Gall in making her claims more credible since “What Pakistan Knew About Bin Laden” seems to be an inaccurately subjective narrative of historical events in Pakistan, at this point.

The censorship of Gall’s article from the locally distributed copies of the International New York Times has resulted in hostile reactions with American assumptions that the article was forcefully brought down by Pakistani authorities because they have something to hide. As can be seen, the article remains available to the public via the internet and if the government was involved, the article would be banned in Pakistan by now.

Pakistan has nothing to hide and they registered their protest by not running a piece that so severely lacked evidence. Perhaps if the piece did not lack substantial proof, its poor editorial content and credibility would not have been questioned and, it would have been published in Pakistan.

This is not the first time the Pakistani intelligence service and military establishment have been accused of extending help to Bin Laden without solid proof. In a politically unstable country such as Pakistan, where institutional rivalry has become an underpinning political theme, accusations such as these serve to weaken the political structures present within the country.

Perhaps if Washington DC was able to provide significant proof in order to place blame on Pakistani authorities, Gall’s article would have been a more effective read. However, without solid evidence in a conflict as such, it is destabilising to the country for its political institutions to be internationally questioned in this manner.

Not only have these allegations created concerns amongst the international community with regards to the reputations and intentions of the ISI, one of the world’s finest intelligence services, and Pakistan’s military, but also within the country itself as Pakistani citizens become increasingly disillusioned and begin to doubt the credibility of their own institutions, hence resulting in vast uncertainties about Pakistani intentions and national sovereignty.

Mira is a first-year undergraduate student at The Johns Hopkins University where she is double-majoring in Political Science and International Relations with a special focus on South Asian and Middle Eastern politics. Mira aspires to serve as a diplomat and a member of the Pakistani Parliament. She tweets @mhaqqani (twitter.com/mhaqqani)