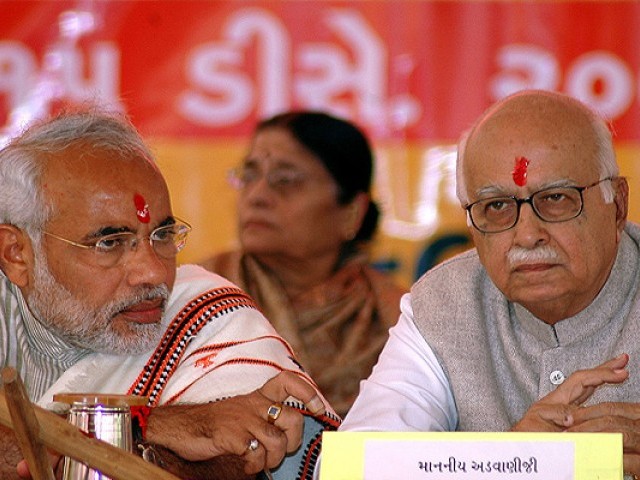 The way the Bhartiya Janata Party’s (BJP) old stager Lal Krishna Advani and other senior leaders have been left out in the cold, in the run-up to the 2014 general elections, and meted out with a shabby treatment by Narendra Modi and his obsequious, lackey followers, reminds me of the case of the cuckoo.

For those who are not aware of what a cuckoo is, it’s a medium sized, slender bird that lays its eggs in the nests of other birds. For instance, let’s assume that a cuckoo has laid an egg in the nest of a hedge-sparrow. When the egg hatches, the sparrow feeds the young one of the cuckoo. However, when this young one grows big, it tries to make room for itself by hitting off the head of the sparrow, which had been feeding it.

Apparently, the saffron party’s prime ministerial (PM) candidate Modi has grown big and is now trying to make room for himself.

With an eye on the prime minister’s office, the cuckoo from Gujarat has dispensed with the services of octogenarian Advani, who has heretofore been his mentor, and other prominent leaders like Sushma Swaraj and Jaswant Singh showing utter disregard for their seniority and the work they have done for the party for decades.

In Advani’s own words,

“The BJP is becoming a one-man party.”

As per a report published in the Economic Times, Advani expressed his concerns with regard to Modi, with senior party leaders, at a meeting on February 27, 2014.

Advani – a leader present in the meeting told the Economic Times – said he agrees with Rahul Gandhi’s critique, which was made in Haryana on February 24, that the BJP has been reduced to a one man show. When another leader proposed that BJP should counter this, Advani is learnt to have said,

“There’s nothing wrong with what he (Rahul Gandhi) has said.”

Advani is learnt to have told the party leadership that,

“Campaigning is a joint effort by the party where all senior leaders should take part… This time it is Modi and only Modi who is visible. What about others, like Sushma Swaraj, who are capable of holding the crowds’ attention?”

True, it is Modi and only Modi in the BJP now, just like it was Hitler and only Hitler in the Third Reich, for dictators around the world follow the same modus operandi.

It is no secret that Modi does not brook dissent and has been running the state of Gujarat literally as a dictator for the last 12 years. Under Modi’s iron-hand rule, opposition is not allowed to flourish; it is either bought or squelched. No wonder Advani and Swaraj – the star campaigners in the previous elections – have been contemptuously pushed aside and left to cool their heels.

Advani, once a mentor and strong supporter of Modi in the aftermath of the 2002 Gujarat riots, has had a strained relationship with Modi for months now and understandably so. The BJP patriarch must have seen straws in the wind and perceived Modi’s true nature before quitting all party posts upon the latter’s elevation as campaign committee chief in BJP’s Goa conclave in June 2013.

He had, subsequently in a huff, also abstained from the BJP’s parliamentary board meeting when the party named Modi as its PM candidate.

Apparently, it is the BJP, Modi’s own party, which has got the short end of the stick and has become the first victim of his dictatorship. By handing over unrestrained power to the hands of one man, the BJP – as some party leaders fear – has dug its own grave and in this manner, also pushed the country toward a dangerous, obscure path.

History is replete with examples that show how dictators do not go to the sepulchre alone, for even as the despots meet their Waterloo, they take along with them their beloved nations and millions of servile, blind followers to their doom and thus, cause irreparable damage to mankind.

Is this the destiny of India too?

Only time will tell if we have learnt any lessons from history or not. But, the signs are ominous. Narendra Modi, as Prime Minister Manmohan Singh warned, will be disastrous for India.

Nonetheless, the big question is what will befall the 86-year-old Advani now?

What has the Providence in store for him?

In ancient India, though, the kings often met with a terrible fate at the hands of their sons and successors. A L Basham in his book The Wonder that was India writes that the kings were constantly warned against the intrigues both of sons and wives, for it was believed that the princes, like crabs, eat their own parents.

Moreover, the prince’s impatience to acquire his patrimony was often gratified by the voluntary abdication of an elderly king. Sometimes the abdication was followed by a religious suicide. Several kings, the most notable being Chandragupt Maurya, are said to have resigned their thrones and slowly starved themselves to death under the influence of Jainism. Others passed straight to heaven by drowning in a sacred river, namely the Ganges.

Will Advani follow suit and march towards the Ganges after voluntarily abdicating to make way for the prince, namely Modi?

Or will he fight to the end and find his niche in history?

I, for one, am feeling very sorry for him.

For despite his alleged involvement in the Babri Masjid demolition and his apparent anti-minority stand, he remains a learned man and seasoned politician. The BJP ought not to forget that it was his Ram Janmabhoomi movement in the 90s that had catapulted the party to the corridors of power.

Therefore, the Sangh Parivar (family of Hindu nationalist organisations) and their poster boy Modi must respect his age and his contribution to the cause of Hindutva and show him the basic courtesy that a leader of his stature deserves.

Advani deserves an honourable exit; this is the least the prince could do for him.