Our weapons must not be the reason children in Syria are dying! 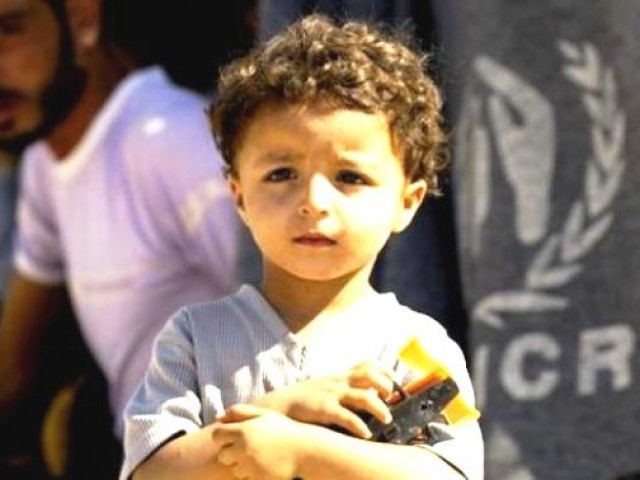 Our weapons should not be the reason a mother loses her child or a sister loses her brother in Syria. PHOTO: AFP

I stood underneath the shadow of the Blue Mosque in Istanbul. This grand symbol of the Ottoman legacy rested benevolently amid a vast courtyard filled with lush gardens, sparkling fountains and the excited murmurs of tourists.

As I fully absorbed my surroundings, I felt a sudden tug on the hem of my shirt. I looked down to see a child standing in front of me, repeatedly pointing to something he held in his left hand. He was young of age, hardly thirteen-years-old. His worn out clothes and look of utter desperation were enough to betray the fact that he was not a tourist. I looked at what he was pointing towards in his hand and realised that it was a passport, opened up to display the front cover with his personal details. There, written in black and bold letters, was a single word that gave away the child’s past and governed his future,

The child hastily put the passport back into the satchel he had slung over his shoulder and instead took out a small packet of pocket tissues. I did not need to understand Arabic to understand the meaning behind this turn of action. I gently took the packet from his hands and placed a few Liras in it, praying that I had given enough for him to not go hungry tonight. He turned and ran away as soon as the exchange was over. As I watched him go, my eyes fell on the other children in the courtyard, carrying their passports in their hands, urging happy families, loving couples and lone backpackers to buy whatever trinkets they had within their own satchels.

According to a UNICEF report, Turkey plays host to 185,205 of the 1,000,669 Syrian refugees. While many reside in refugee camps, others have migrated to big cities such as Istanbul to somehow earn a livelihood.

As Pakistanis, we should be quite familiar with the tragedy of when a nation becomes nothing more than figures. These figures come into existence when we cease to recognise the value of life as human beings. We strip that life of emotions, take away its human connections and rob its dreams until all that remains is a number quoted in government reports and news channels.

2,507 people were killed through target killings in 2013 alone, an average of 50,000 people have died due to terrorism related attacks and death toll crosses 200 in Thar as children suffer from malnutrition.

Like Pakistan, the nation of Syria is slowly disintegrating into mere numbers as well. Families are just a number that is being displaced to refugee camps. Children can no longer afford to dream because they are now a number that is either uneducated or suffering malnutrition.

While our media informs us of this dire situation, it also casts concern over the strategic shift Pakistan’s policy might have taken towards the Syrian crisis, from upholding a neutral stance to that of abetting and aiding Syrian rebels through weaponisation at the behest of Saudi Arabia. Though our government denies any such U-turn, the recent grant ‘generously’ given by Saudi Arabia that helped strengthen Pakistan’s foreign exchange reserves only makes one wonder about all underlying agendas of such generosities.

There is already too much innocent blood on our hands from the consequences of countless bad decisions made in the past by our governments.  The biggest example in front of us is Afghanistan. Years ago, our intelligence agency on the instructions of the US trained and weaponised a rebel force to fight Russian forces invading Afghanistan. Today that rebel force, the Taliban, is the face of terrorism that has ravaged this region and is responsible for the death of thousands.

Our government needs to learn to stop playing pawn in the hands of king makers and not repeat history nor its consequences in regards to Syria now. We need to take a step towards giving Syria’s people a future by taking five steps away from a policy that contributes to their destruction. Law makers should be urged to revisit Pakistan’s foreign policy to make sure that our arms industry is not up for sale for any country’s political pleasure.

No to weaponisation on our part can result in one less weapon in the hands of either Bashar al-Assad’s regime or the rebel group, thus saving dozens of innocent lives. Our weapons should not be the reason a mother loses her child or a sister loses her brother in Syria. We should not help add to their already increasing figures.

An alumni of Nixor College. She hopes to pursue her education in International Relations and Human Rights.