I hope MH370 has been hijacked to Pakistan 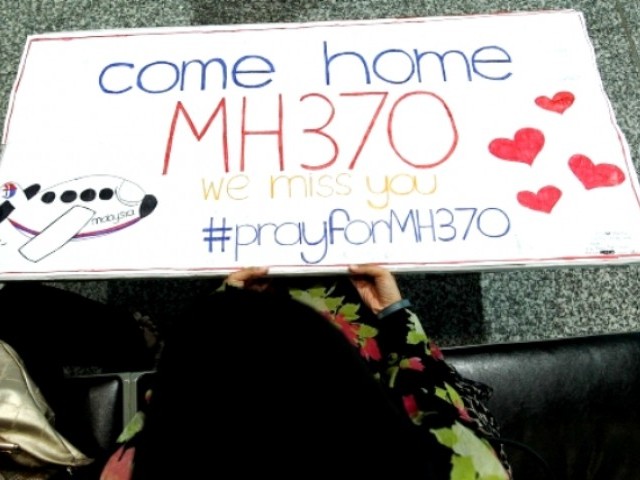 Lieutenant General Thomas McInerney appeared on Fox News to explain how he believed the missing airplane could’ve landed ‘safely’ and ‘intact’ in Pakistan to be used for terrorism in the future. PHOTO: REUTERS

Speculations that MH370 had been hijacked to Pakistan hardly surprised me. Lieutenant General Thomas McInerney appeared on Fox News to explain how he believed the missing airplane could’ve landed ‘safely’ and ‘intact’ in Pakistan to be used for terrorism in the future.

I had, in fact, been waiting for the media to start questioning whether the Taliban had played a role in the disappearance of the plane. And since Pakistan is globally considered synonymous with the Taliban, it was only a given that the media started wondering whether the plane had been hidden there.

Even when the Tehreek-e-Taliban spokesperson denied any such claims, the possibility still loomed.

If Osama bin Laden remained undetected in Pakistan for years, why couldn’t a commercial plane?

I could not help but smirk as I saw the many news clippings suggesting an act of terrorism was responsible for flight MH370 disappearing, and that the plane had been flown and hidden in Pakistan.

I wasn’t bothered because I, like most of my country-men, have become immune to the blame game. When satellite images of what could’ve been the wreckage of the doomed aircraft, floating in the southern Indian Ocean, were released by the Australian government, I was mildly relieved.

If this was definitely the debris of the missing plane, the foreign media had definitely managed to put a giant foot in their mouth; aliens, paranormal activities, pirates, a ‘new’ Bermuda triangle, black holes, nuclear warfare and many other thoughtless, sensationalist theories had been put forward. And then of course, there was the Taliban and Pakistan. But this possible debris sighting had happened thousands of miles away from Pakistan and the hijacking theory didn’t fit anymore.

I hoped this would’ve been answer enough to those who had heedlessly pointed fingers at Pakistan. I had a gut feeling that the plane had gone down and that my country wasn’t involved, and I was happy that that was how the search for the missing plane was unfolding.

The search mission ended with no sightings of possible debris.

Then, a thought crossed my mind: What if MH370 was, in fact, in Pakistan?

What would that mean for me, a student studying and living abroad? Would I be able to look my Malaysian and Chinese friends in the eye? For that matter, would I be able to look anyone in the eye? Would I ever be able to convince another person that not all Pakistanis are bad people? What about the people whose views about Pakistan I had not yet managed to change, would they ever take me seriously? Could I ever again happily declare that Pakistan, for me, was the best country in the world? Would I ever be okay with the fact that my countrymen were behind these catastrophic set of events? And what would it mean for Pakistan and its people? I couldn’t even imagine.

I pondered over this question for quite a while.

If Lieutenant General Thomas McInerney is right about his claims and the plane is for a fact hidden somewhere in Pakistan, it could mean many things; things that could lead to grim consequences for my country.

But what it would also mean that there is hope. A glimmer of hope that the passengers of flight MH370 are still alive.

I think of the many faces I have seen on TV strewn across conference rooms in Kuala Lumpur, waiting for answers about what happened to their loved ones. I think of the relatives who are hounded by the media when they break down. I think of the many pleas they have made to the many governments involved in the search for the missing aircraft. As much as I can’t fathom the thought of the plane being hidden in Pakistan, it is the theory that I, suddenly, most want to believe.

So if MH370 is found in Pakistan, what would that mean for my country? I can’t say I know. But I know that if it would mean that there is still a slight possibility that hundreds of families aren’t ripped apart, then it would be a burden that I, as a Pakistani, am willing to bear.

If it would mean that the agony of those desperately awaiting the safe return of their loved ones is put to an end, then I hope that the plane is safe and intact in my country. And I am sure that whatever consequence we will face, it would be a burden that my country, an already over-burdened, crippled nation will bear with resilience.

Second year biochemistry undergrad at the University of Glasgow. She tweets @haleemak_ (twitter.com/haleemak_)