The sky falls in Islamabad 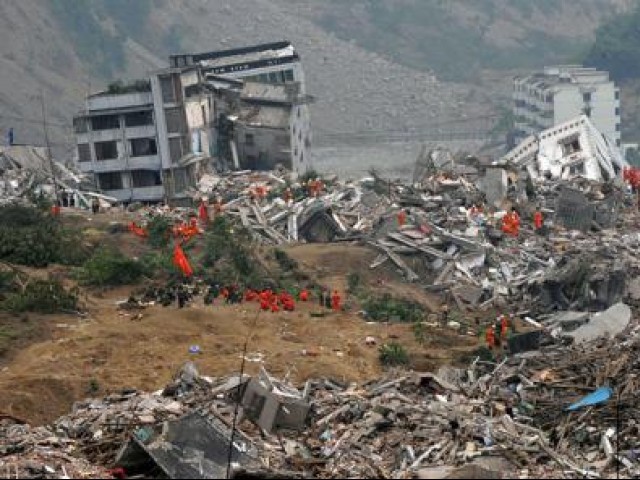 I am too sleepy to be coherent but am grumble randomly nonetheless. The hubby is watching Prince of Persia and barely bothers to nod at my chatter.

When the bed starts shaking, both of us initially blame each other. But then, we see the lights swinging and realization strikes. An earthquake – and from the way it feels, a pretty severe one. The shock hardly lasts a couple of seconds but we rush outside.

A couple of dogs bark, a cat cries, but all is quiet otherwise. No one else seems to be up at this late hour and the whole neighborhood sleeps.

We go back in and switch on the news.

It is then, that we find out that the sky is falling.

Tuning in to lies and fear

We start with Dunya (being loyal to the channel that we are associated with), switch to Geo (for old times sake), then on to Samaa and Express News. It is the same story everywhere. The screens are red, anchors are screaming and the message is clear:

There has been a shadeed earthquake in Islamabad and people are fleeing their houses in fear.

The anchors are talking to the night reporters (who must have been half asleep on their desks) – but somehow, hardly three minutes after the quake the reporters are giving eye witness views, sketching a picture of widespread panic.

One reporter claims that people are reciting Quranic verses in fear, another goes on to add that “log Allah-o-Akbar kay naa’ray bulund kar rahay hian.”

An anchor on another channel is reminiscing about the 2005 earthquake. She gives us a quick review of the grim statistics from back then and moves on to say that the recent shock has reminded people of that disaster and thus people are panicking.

Concerned, we debate the sensibility of staying in when apparently so many people are obviously thinking of impending doom. I take a quick peek from the terrace and find the roads as deserted as before.

‘Are you okay?’ they ask me

My brother calls, worried sick. A couple of friends from Karachi text, one asks if any buildings have fallen. Mom-in-Law calls, asking us if she should get out of the house again. She quotes a news channel and says a shock of this magnitude might lead to aftershocks.

So far, none of the channels has said a word about the intensity of the quake. Geo is the first one to display the 4.6 richer scale figure. “Only 4.6?” I think. Later on the figures change to 5.3.

The anchors are still screaming. The focus has shifted from mass panic to possible damage. Someone says it is hard to asses the exact damage done by the earthquake. Someone else is cruder and speculates about the ‘jaani o mali nuqsan.’

Through out the running commentary, the 2005 earthquake remains a vital reference.

The anchors recall how the real damage after that particular disaster could not be assessed for weeks. Sickened we switch off the TV and head back to sleep. I wonder if I would have been able to discard the hype as easily, if I didn’t know how TV news channels work.