A Pakistani, an Indian and the gentleman’s game: And after the match… 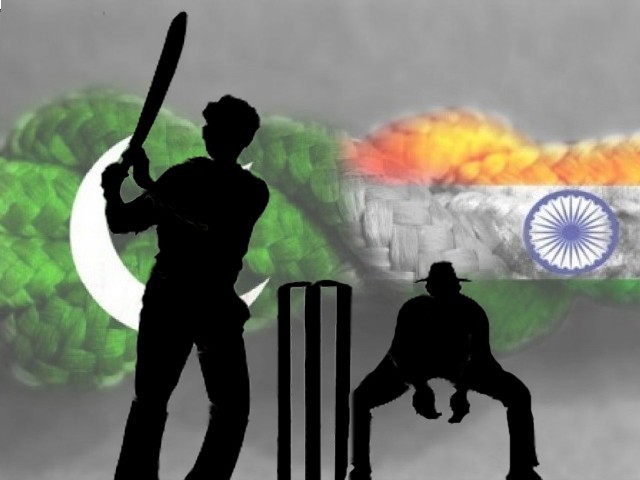 "I’m going to be there with you, if India and Pakistan end up in the final. And no matter who wins or loses, you and I my friend, will still win!"

Imran finished off the last bite of his dinner, washed it down with a cola and looked around the living room. It had been a long and tiring day for him, his wife and their house-maid.  Their friends had come over with their children for the day and the effects could be seen all over the house.

He got up to switch off the TV when the familiar sound of an incoming Skype call diverted him to his iPad. He looked at the screen and grinned. As promised, it was Rajesh calling. Imran received the call and said immediately in a fake Bengali accent,

(Hello, Sir isn’t at home. I am his servant, Sharfu speaking.)

Rajesh laughed out loud and said,

“Well, Mr Imran… sorry… Sharfu, tell your Sir to come out from wherever he is hiding. We won’t say anything to hurt his feelings even more.”

“It’s okay, it’s okay. As Baba Shahrukh Khan said in one of your movies,

(Small, irrelevant things such as these happen in big cities.)

“Really? What happened? I was just calling to find out the score. I couldn’t see the match… well, at least not the one that Pakistan was supposed to win as you said yesterday haha… on my TV, they showed a version where India beat Pakistan and beat Pakistan very badly! By seven wickets and more than an over left… so I got confused…”

“That’s why we always tell you, buy imported and original things. Don’t tell me you still buy Indian brands of TVs! I’m sure your TV shows the Statue of Liberty wrapped in a sari and wearing a bindi. On our TV, they showed the version where one very good team just had a very bad day and lost out to a team that played very ordinary cricket.”

Rajesh smiled and shook his head in disbelief,

“Wake up, wake up my friend. You Pakistanis are in the ‘United State of Denial’. Let’s face it, there’s just no way you could win against India in any World Cup, be it One Day International (ODI) or T20.”

“Well, if you guys promise that you won’t suspend the entire Kashmiri student population from each one of your universities when we beat you in the World Cup, then we will definitely win. It’s just that this time we had to be selfless and think about the welfare of our Kashmiri brothers so we decided to give up the match for a ‘greater cause’.”

“Wah wah… sacrifice is your middle name… But on a serious note, you know that I hated what happened with those poor Kashmiri students after the last India-Pakistan match in the Asia Cup. That was unacceptable, not to mention, embarrassing for me as an Indian.”

Hearing this, Imran became serious too and said,

“Nahi yaar, you don’t need to tell me that. I know that you would never approve of such things. I was just teasing you.”

“I know. Not just me but scores of enlightened, educated and broad-minded Indians never appreciate such things in the name of ‘patriotism’. They know too well that politicians have always misused people’s emotions and passions. There are a few people on both sides of the border who just don’t want peace for their own selfish reasons.”

“That’s true. And anyone who spreads the message of hatred just to show ‘love’ for his own land is nothing but a charlatan, trying to trick people into a false sense of ‘patriotism’. And unfortunately, our countries have an endless supply of these scum-bags.”

Rajesh eyes lit up at this and he smiled saying,

“Yes, and your words ‘endless supply’ reminded me of bhabi’s endless supply of shami kebabs and Lahori samosas during every match. I would even be willing to let India lose one match against Pakistan if only you promise that bhabi will treat us to her amazing culinary skills throughout the match.”

“Deal! Then, you should hurry up and book your flight soon. When is the T20 final? This offer is valid only for the final now in which we can sit together to watch the match inshallah, on my TV mind you, and this record of never beating India in the World Cup will also be changed forever!”

“Ok, you guys should definitely get brownie points for your optimism and ‘never-say-die’ attitude.”

And with a wink, he added,

“God knows if it’s that or simply stubbornness.”

(Beyond the stars there are more worlds,

This quest of love has more tests to pass.)”

“Deal, Sir, deal! So I’m going to be there with you if both the teams end up in the final. And no matter who wins or loses, you and I my friend, will still win!

A Pakistani, an Indian and the gentleman’s game!