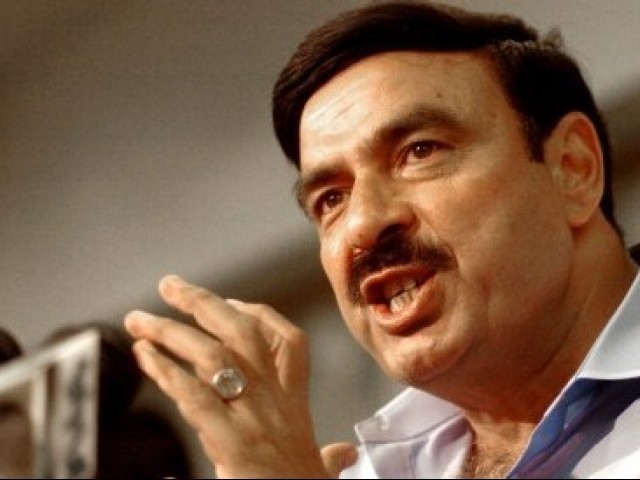 Today, a vocal opponent of PM Nawaz Sharif and his government, Sheikh Rasheed was initially the right-hand man of Nawaz Sharif. If Sharif is so incompetent and the PML-N so corrupt, why did it take Sheikh Rasheed 16 years to part ways? PHOTO: EPA/FILE

Farzand-e-Rawalpindi (Son of Rawalpindi), Sheikh Rashid Ahmed, is the apple of the eye for many TV anchors. Ratings sky-rocket when he is the guest on a show. His blunt comments, revolutionary slogans and political predictions are loved by the public.

He talks about the problems of the common man, in the language of the common man and is always well informed of what’s cooking in the circles of the Pakistani ruling elite – both, civil and military.

But Sheikh Rasheed has a past which he has either conveniently chosen to forget or is compelled by circumstances to simply ignore. Today, he may be the loudest voice against this ‘corrupt’ system that does more harm to the common man than good but he himself has repeatedly washed his hands in this ganga.

In spite of holding multiple important portfolios in his political career, there are no corruption charges against him. However, an investigation of the details of his assets submitted to the election commission during the 2010 by-elections and the 2013 general assembly elections, showed some discrepancies.

In 2010, Sheikh Rasheed Ahmed declared the net value of his assets at Rs24.61 million. He declared the value of his land in Fateh Jang at Rs8.63 million, Al Rashid Market at Rs1.05 million and a farm shed in Fateh Jang at Rs800,000. He also declared a fixed deposit amount of Rs13 million, a Honda vehicle valued at less than Rs1 million, a tractor valued at Rs170,000 and weapons worth Rs30,000.

But in 2013, Sheikh Rasheed’s net assets increased to Rs41.8 million which is a massive jump in a mere three years. This increase seems stranger when one notices that the business capital stated by Sheikh Rasheed in 2013 election was only Rs250,000 and that the value of his land in Fateh Jang decreased from Rs8.63 million to Rs3.7 million.

Which property in Pakistan loses its value so rapidly?

I am sure Sheikh Rasheed must be furious at such a bad investment. Moreover, due to the alarming security situation in the country, Sheikh Rasheed (who calls himself a common man), also had to buy more weapons worth Rs0.6 million. In 2013, he declared the value of his weapons to be Rs0.63 million.

I am not implying that corruption was done in these three years but it does seem as if the asset details provided to the Election Commission of Pakistan (ECP) were wrong in either 2010 or 2013. Was this because he had black money or did he do this simply to avoid paying taxes?

Today, a vocal opponent of Prime Minister Nawaz Sharif and his government, Sheikh Rasheed was initially the right-hand man of Nawaz Sharif in his earlier governments and has served twice as federal minister in the Sharif cabinet. If Sharif is so incompetent and the PML-N so corrupt, why did it take Sheikh Rasheed 16 years to part ways?

Even before the 2013 elections, there were rumours that Sheikh Rashid will join PML-N. It was only when the local PML-N Pindi leadership refused to accept him and when the Pakistan Tehreek-e-Insaf (PTI) agreed to a seat adjustment with Sheikh Rasheed that he came out and dismissed such rumours.

Another criticism against Sheikh Rasheed is his support for Pervez Musharraf throughout his tenure. Sheikh Rasheed joined the then newly formed military-backed Pakistan Muslim League Quaid-e-Azam (PML-Q) after the 2002 elections and managed two ministerial portfolios during its five year rule from 2002 to 2007. It was only after he lost the election in 2008 to Javed Hashmi and later the by-election to Malik Shakeel Awan, did he realise that the ‘Musharraf tag’ was bringing down his popularity and that he needed to do something about it.

He later founded his own party – Awami Muslim League Pakistan (AML) and managed to win his traditional seat from Rawalpindi in 2013 while allied with PTI. His calls for inqilab (revolution) and his alliance with the PTI was a political sixer at that time and perhaps even now. But how can we forget the time when he called PTI a ‘tanga party’ and Imran Khan a ‘mamooli kaptaan’ (ordinary captain) in 2005? Was he unaware of PTI’s slogans, manifesto and Imran Khan’s honesty at that time?

I will leave it to the readers to decide whether Sheikh Rasheed should be classified as an inqilabi (revolutionary) or part of the status quo. But my message for them and the general Pakistani public is,

(Don’t be fooled by the innocence of his smile, unfaithful people act quite well.)

A news reporter in Hong Kong. HIs interests include current affairs, politics and social affairs. He tweets @wahabtariqbutt (twitter.com/wahabtariqbutt)

What I saw at the Pakistan vs India match in Adelaide