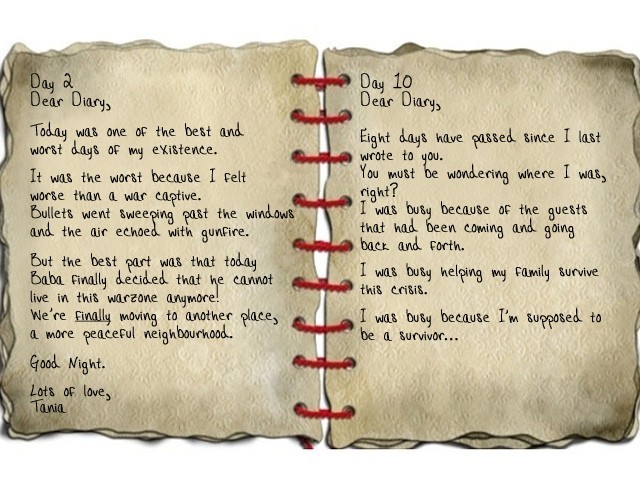 What good did this gang war do to us?Nothing. Absolutely nothing.

Today, I was awakened to the thundering noise of gun fires and frequent gapped blasts once again.

Despite the fact that this is something very normal for us, the people living in Lyari, I still get scared. These horrific noises still send shivers down my spine and my heart sinks with ever boom. Every time I hear a gunfire shot, I wonder who has been slaughtered in this meaningless gang war going on.

Last night, an unknown bullet struck Sara’s father, our neighbour, and he died instantly. I could hear the poor girl screaming and wailing over the loss of her father. He was not just the only bread winner of his own family but also took care of six helpless sisters and an invalid brother.

Sara’s poor old grandmother kept cursing the ruthless and heartless culprits for displaying such barbarity. This incident has frightened me even more. I’ve been clinging to Baba since then. I haven’t let him step out of the house even once. I fear I might lose him if I let him do so and that adds on to my agony.

Now it’s time to sleep. I’ll get back to you tomorrow.

Today was one of the best and worst days of my existence.

It was the worst because the bullets went sweeping past the windows, the gaps between those blasts became less frequent and the hurried movements of the gunmen shook the earth, the core of the neighbourhood trembled and the air echoed with gunfire.

I have never felt more horrified. My heartbeat increased so fast that I thought my heart would break through my ribs and come out. I began weeping. I felt worse than a war captive.

But you know what the best part was?

Today Baba finally decided that he cannot live in this warzone anymore! We’re finally moving to another place, a more peaceful neighbourhood. I can’t even begin to tell you how happy I am.

I might not be able to talk to you as often since from tomorrow onwards, we begin hunting for our new home.

Eight days have passed since I last wrote to you.

Today I want to tell you everything that happened in these last few days but I am blank. Completely expressionless. I have fallen short of words. I want to cry but my eyes have dried up. I want to scream but a lump is struck in my throat.

You must be wondering where I was, right?

Maybe I was busy with the house hunt? Or maybe shifting?

No, I wasn’t busy because of either reason.

I was busy because of the guests that had been coming and going back and forth.

I was busy helping my family survive this crisis.

I was busy because I’m supposed to be a survivor.

I was busy because Baba died.

Yes, my father who meant the world to me died. Baba died. And with him died everything; my fear, my anxiety, my hopes, my dreams and everything else. I died with him. The gunfire doesn’t scare me anymore.

You must be wondering what happened to Baba, right?

The same thing that happened to Sara’s father; he was hit in the head by a stray bullet and died instantly.

Remember I told you I didn’t let him step out of the house?

I didn’t display an inch of leniency. So, he stepped out of the house at dawn, while I was still asleep, to get bread and butter for breakfast. Before stepping out, he told my mother,

“Let me get it done before Tania wakes up or else she’ll keep clinging to my sleeves and won’t let me step out.”

I don’t want to live anymore. I feel like my world is empty without him.

What good did this gang war do to us?

The government could have prevented the loss of so many valuable human lives but what did they do?

Again nothing. Oh wait, they did do something.

They ‘condemned’ it. Why don’t they realise that condemning is something they should leave to us, the ordinary people, and instead they should take some action so that no more Saras and Tanias lose their fathers. Giving us a huge sum of money doesn’t replace the affection and love of our father.

I dont want their dirty money.

I just want my Baba back!!

Can their ‘condemning’ the attack bring Baba back?

They have to realise that this is the time to do something and they need to take some positive steps. They have to. Because if they don’t, soon enough, there may be no one left to save.