Friends versus How I Met Your Mother: Friends for the win! 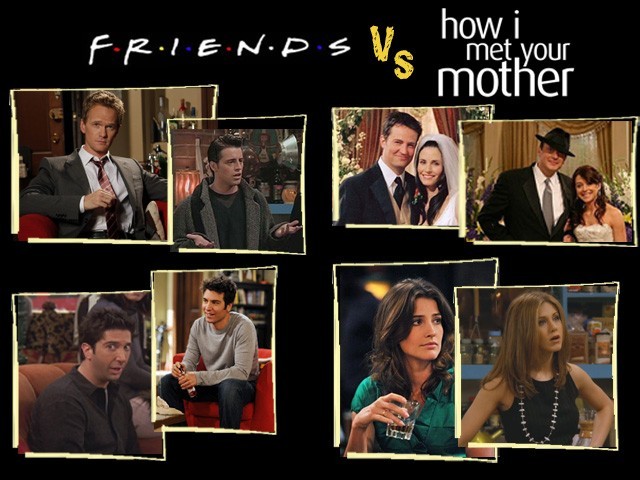 I'd rather watch Friends in Punjabi on one of the Pakistani channels. Even that’s funnier than How I Met Your Mother!

There is always that one TV series that you become addicted to and when that series comes to an end you have absolutely no idea what you’ll do for that specific one hour of your life anymore. Friends was that one comedy series for me. Although I didn’t watch the show from the first episode of the first season, I was hooked onto it as soon as I started following it.

And even now, almost 10 years after the last season of Friends ended, I still watch some episodes whenever I get the chance. I know for a fact that even though Friends ended in 2004, all die-hard fans are still in love and haven’t really found a replacement. And how can they? The love, laughter and struggles of the six young friends were just too real and at the same time too humorous to be replaced that easily.

Friends was definitely not for fickle fans. The show grabbed you, hooked you and became a part of you for a long time to come.

So, imagine my anger and dismay when people around me started comparing this phenomenal show with a show like How I Met Your Mother (HIMYM), another comedy show. HIMYM began in 2005 and is now in its last season. The show revolves around Ted who is a loner at heart and searches for the woman of his dreams with the help of his four best friends.

My friends who have followed HIMYM say that Friends is old school and it is high time I started catching up with the times. By this they not only meant that I should watch HIMYM, they wanted me to like it too! I know the ‘old school’ argument is supposed to annoy me into watching and loving the show but I just couldn’t do it.

Call me a blind fan if you will but there is something about Friends that I or anyone in their 20s can easily relate to. Although it is a TV show and that too with exaggerated hysterics of good comedy, there’s a certain reality to it – their relationships, their silliness, their uncertainty, their openness – that just makes you think you’re watching your entire life on screen.

Fortunately or unfortunately, HIMYM has never made me feel this way. Yes, there’s humour in the show but it’s just that kind of ‘over the top’ humour that you simply can’t relate to. You can watch it sometimes for its entertainment value but it doesn’t make you feel like you’re one of the characters or they are one of you.

That’s what I think at least.

Anyways, I gave the show a shot and here are eight reasons why I would still rather watch Friends (even after all these years) over HIMYM:

1. Narrating a story to your kids about your love life – not a good idea!

This is what HIMYM is pretty much all about. The entire show – and I mean from the first season to the last – is about Ted telling his kids how he met their mother, with detailed accounts of all the women he dated, dumped and got dumped by (and that definitely happened more often!) on the way. I mean, who does that? Who would want their children to know all the details of their love life, let alone their sex life?

I know I wouldn’t!

Every episode is about Ted regaling his bored kids with tales of his romantic pursuits and the episode (s) ends with them (and us) finding out that the woman in the story didn’t turn out to be their mom! Imagine watching this for nine seasons.

Both shows have their ‘funny guys’. In HIMYM, it’s Barney – the womaniser, the coolest member of the group, the ‘awesome’ one and apparently the funniest guy. One of his quirks, among others, is that he wears a suit at all times. You’ll find him in a suit even at 2am. I am sure he would wear a suit even to Marshall’s ‘pyjama party’.

So, yeah, that’s funny I guess, but for nine seasons?

Coming to Friends, here you have the dumb, goofy, lovable womaniser Joey. Need I go on? Barney may be funny but Joey is hilarious. In fact, I think Joey alone is capable of more humour than the entire HIMYM cast. Why else do you think he’s the only character that got a whole show for himself called Joey after Friends came to an end?

He’s so much more genuine than Barney that you can’t help but love him for his self-mockery and silliness.

“I am Joey. I’m disgusting. I make low-budget adult films.”

No matter how hard I try, Barney’s “Legend, wait for it…wait for it…dairy” cannot make me laugh as much as Joey’s suggestive “How you doing?” to every attractive woman he comes across.

I guess the difference between the two is that while both characters love women, Barney’s humour revolves around the girls he dates while Joey’s humour comes from within him.

Both shows have their ‘hot women’ – Robin in HIMYM and Rachel in Friends. But again, Rachel’s need for commitment and a relationship makes her more real as compared to Robin’s flighty character. 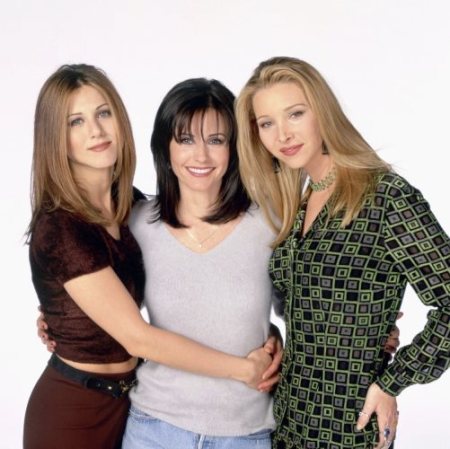 Also, all the characters of HIMYM are obsessed with the fact that Robin is Canadian. Come on, she is Canadian, not a terrorist! Why so racist?

Or, maybe I just need to be an American to understand that. Doesn’t say much about the show’s global appeal, does it?

Let me guess who came to your mind when you read that… Monica, right? There were countless episodes of Friends with Monica obsessing over keeping order and cleanliness. What’s less obvious is Lily’s obsession with shopping and spending money in HIMYM. I think this says a lot about the strength of the characters.

Interestingly, both women get married to guys who are awful with women – Marshall and Chandler – but it’s obvious that they both love their ladies a lot.

I may be biased but I still think that Monica and Chandler make a cuter, more relatable married couple.

Another similarity between the ‘old school’ Friends and the ‘new age’ HIMYM are the love triangles on the show; Ross-Rachel-Joey in Friends and Ted-Robin-Barney in HIMYM. But the HIMYM triangle simply doesn’t work for me. I really thought that Robin and Ted would eventually end up together; they seemed so good together. So, imagine my shock when the most eligible person to be the mother of Ted’s kids started to date Ted’s very own womanising friend, Barney and became ‘Aunt Robin’ in the storyline.

I don’t know about you but that was just disturbing.

“We wish you were our mother.”

How weird is that?

The love triangle in Friends somehow didn’t bother me; maybe because the kid’s perspective wasn’t there.  It just seemed humorous rather than uncomfortable and slightly sleazy.

Eight seasons without even a hint of the real mother and then they come up with that woman with the yellow umbrella? I can understand the disappointment of Ted’s kids.

HIMYM just seemed more myopic in its storyline of finding a soul mate for Ted while Friends offered a lot more to its fans. It was a complete outlook on life. It brought to light petty issues and showed the audience how we usually make a big deal out of these issues. It allowed us to laugh at ourselves and see the lighter side of life.

It doesn’t take a genius to figure out that HIMYM is a ‘modern’ version of Friends. I’m sure that Carter Bays and Craig Thomas, the creators of HIMYM, were undoubtedly inspired from Friends down to the hangout where the group would meet. In Friends the six friends met up at Central Perk while in HIMYM, the five (plus any new member) would hang out at McLaren’s.

But there was more to the lives of the friends in Friends than the hangout. We saw them in their apartments, at work, in taxis, planes, hotels and more; while the HIMYM gang was filmed at McLaren’s more often than not. 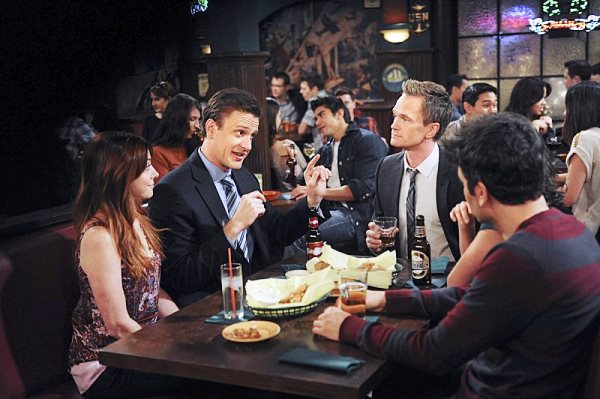 8. More than love and making love

Friends is not only about the love lives of the characters. It doesn’t show intimate scenes in every single episode. It is more than that. It is about the struggles of six people, their survival in the city, tension amongst friends. It is about the happy and sad moments they share, the difficult times for a couple. It is about the little everyday things that we tend to overlook all the time. And yet, every scene has snippets of humour here and there.

But there is one thing that this show is not.

It is not about finding a mother! A mother who didn’t even show up until season eight.

So, why start a new show? Why not start Friends again?

I just don’t get it. Firstly, HIMYM seems to be inspired by Friends and secondly Friends is just so much better. It’s closer to reality. You can see aspects of your own personality in those six characters and somewhere through all the humour, it teaches you lessons worth remembering throughout your life. It gives you everything – relationship advice, professional advice, advices for friends.

Although Friends ended years ago, I’m sure there are still a lot of fans out there who, like me, look forward to watching the show all over again. On the other hand, HIMYM is in its last season and I really don’t know if it will be missed.

If you’re a fan of HIMYM or (God forbid) you’re one of those who’s never seen Friends, here are five must-watch episodes:

Season 1, episode 1 – The one where Monica gets a roommate

Season 5, episode 8 – The one with the Thanksgiving flashbacks

Season 5, episode 14 – The One where everyone finds out

Season 8, episode 13 – The One where Chandler takes a bath

I can guarantee that you’ll download all the seasons and watch them through the night.

I, for one, hope that Friends will come back with a whole new series of seasons. But until then, try watching Friends in Punjabi on one of the Pakistani channels. Even that’s funnier than HIMYM!

A student of English Linguistics at the Karachi University, she is a freelance content writer and editor and likes writing about social issues and entertainment.

Are we not ‘Pakistani’ enough for them or are we not ‘Muslim’ enough?

10 meaningful ways to spend your Eidi