Larkana: Losing our soul, religion and country, one minority at a time 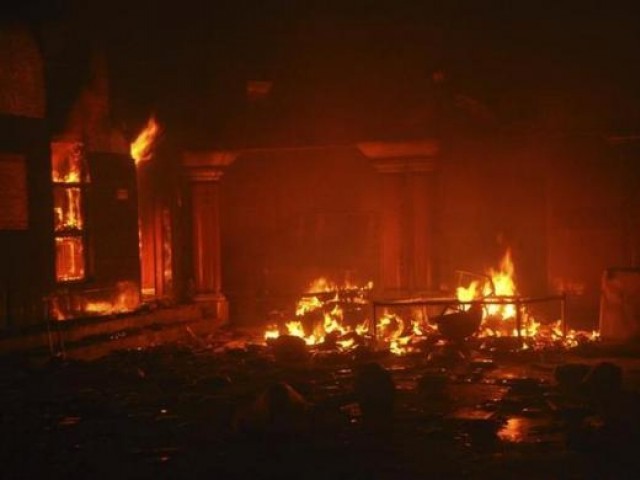 A Hindu temple burns after it was attacked in Larkana, Sindh on March 15, 2014. PHOTO: REUTERS

Today is Holi, the festival of colours. Today, Hindus bedeck themselves in the colours of life and love and many other communities join in to mark the start of spring. Alas, the only colour adorning Pakistan is black and red. Our Hindu brethren in the streets of Larkana should be celebrating this auspicious festival. Instead, they hide in their houses, afraid for their safety and worried about reprisals from a community that should be their protectors.

Once again, the spectre of bigotry and hatred has raised its head in what is becoming a far too frequent pattern. Once again, we are left wondering about the empty symbols of equality, the white strip in our flag and the all but the forgotten speech of our founder which he made on August 11, 1947 and promised freedom of worship and equality for all citizens of Pakistan.

What is the issue here? The desecration of the holy book or the inherent intolerance for those of another religion that has permeated society? If the pages of the holy book are damaged by one person, is that a license to burn down temples and places of worship? Is pillage and gross retribution a tenet taught by Islam? It is not; however, there are those who have strayed too far from the ideas of equality and tolerance that Islam preaches.

The 2012 killing in Florida of Trayvon Martin, a black youth, highlighted the ignorance of a few but it was the strong response of the government which showcased the rights given to all members of a society. President Barack Obama himself paid his respects, even as the news caused a national outrage in the United States and dominated the presidential race taking place at that time.

That is the litmus test of minority rights, the reaction of the state and the public at large to an ugly incident.

Has there been a similar response to the forced conversions of Hindus and Christian girls, the desecration of non-Muslim places of worship, and the everyday cases of persecution that occur in Pakistan? Sadly, the answer has always been a few innocuous statements by the elected officials, empty promises and then ignominious silence by state institutions.

Pakistan’s case is tragic, considering the important role the Hindu community has played in the creation and, later, development of the country. The nation’s first law minister, Jogendra Nath Mandal, was a Hindu who was also nominated by Muhammad Ali Jinnah as one of the four Muslim league nominees in the interim government of joint India in 1946.

Mandal was one of the founding fathers of Pakistan and supported the creation of Pakistan, him being the principle reason the idea of Pakistan got the support of the Scheduled Castes. After partition, he became the chairman of the Constituent Assembly of Pakistan and joined the first cabinet in Pakistan as the Minister of Law and Labour. He was dismayed at the passing of the Objectives Resolution and when the lower-caste Hindus were killed in East Bengal, he saw his vision of a secular Pakistan die with them.

He left for India and resigned from his position, never to see the country he had laboured endlessly to help create.

Other non-Muslims too played critical roles.

SP Singha, speaker of the Punjab Assembly when the resolution for Pakistan was moved, proved instrumental in rallying Christian members to vote for Pakistan, which eventually was passed with the majority of just three votes. History would have been different had he not been there.

Samuel Martin Burke was the magistrate of the Election Petition Commission of Punjab in 1945 and he moved 16 petitions in favour of the Muslim League, in the face of much opposition from the Indian National Congress, Maulana Maudoodi of the Jamaat-e-Islami (JI) and Sir Sikander Hayat, who had wanted a United India.

Also, standing for Pakistan included BL Rulia Ram, Bhim Sen Sachar and others who fought and won this country for us. These people are amongst the many who shared Jinnah’s dreams, lived and died for Pakistan and left their homes in India, only in the belief of a new and tolerant country.

There are war heroes who have accepted death as readily as any of their Muslim brethren. Christian, Hindu and Parsi soldiers have fought and died as recently as 2008, in the military operation in Swat. These are also Pakistanis, people who have worked for this country and call it their home. These are our friends and neighbours, school teachers and nurses. We laugh with them, partake in their joys and mourn their tragedies.

They form part of the tapestry of Pakistan; a tapestry which is in danger of being shorn of the diversity, passion and patriotism that they add so readily to it. We stand with them to remind them and more importantly that the true measure of a nation is how it treats those whom it is meant to safeguard.

If we don’t protect their rights, their places of worship, their homes and livelihoods, then we have lost the soul of our country.

That is an eternal loss which I refuse to accept.