Options for rape victims in Pakistan: Stay silent, get an abortion or set yourself on fire 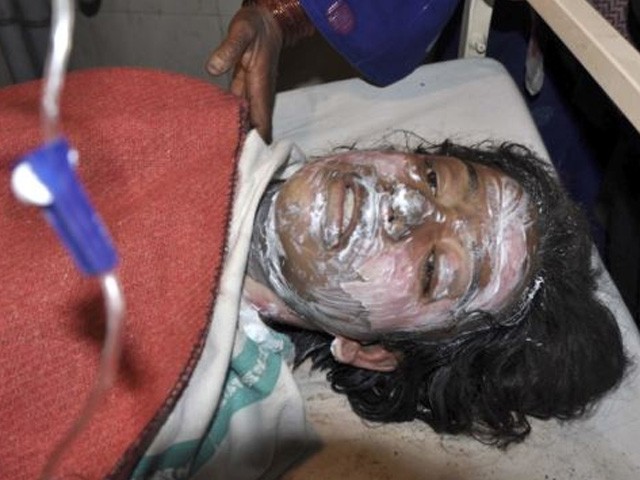 If a rape victim gets pregnant, she can either get an abortion or set herself on fire, like the girl in Muzaffargarh. PHOTO: REUTERS

I feel sorry for Pakistani rape victims who can never get the justice they deserve. In the first instance, going by what Jamaat-e-Islami (JI) Chief Syed Munawar Hassan said in an interview that a rape victim should stay silent and not report the incident to the police, or anyone else for that matter.

I asked another member of his party,

“What will she do if she gets pregnant?”

“Impossible, a woman cannot get pregnant unless she’s willing”, quoting a US Republican Congressman who said the same thing.

So now we know why our illiterate people blame women for not conceiving; they actually believe that it’s in their wives’ power to become mothers. If this were true, a woman would only have to say ‘I don’t want to get pregnant’ and wouldn’t need birth control pills, and thus a lot of factories would have to shut down.

Hypothetically speaking, let’s suppose a rape victim decides to report the crime to the police officials. You can imagine the scene at the police station. It’ll be something like this:

Station House Officer (SHO): “So you say you’ve been raped? Do you have four male witnesses who saw this happening?”

Rape victim: “If there were four people there, they would either have prevented the rape or would have raped me themselves. Besides, even if I’d known I was going to be raped, I don’t have four ‘mehram’ male relatives whom I could’ve taken along to witness the incident.”

Rape victim’s aged father: “But what if she gets pregnant?”

SHO: “We’ll charge her with adultery.”

Let’s assume that the rape victim’s relatives somehow manage to get a case registered against the accused and ask for DNA samples to be taken. And the head of the Council of Islamic Ideology says,

“DNA can be used only as supporting evidence in a rape case. It is essential for the rape victim to produce four male witnesses first.”

Back to square one. Now the poor rape victim is in a quandary. If the matter ever gets to court, she will be asked why she didn’t take anyone else along with her, didn’t she know that it’s not safe for women to venture out alone?

What can she say?

“Judge sahib, I don’t have any brothers, my father was out in the fields and my mother is bed-ridden and can’t walk, etcetera.”

Poor kid, she has no choice but to remain silent and pray she doesn’t get pregnant. If she does, her options include going to one of those women who give abortion medication or she can set herself on fire, as a girl did a few days ago in Muzzaffargarh.

That, of course, would be the best choice for her, seeing that the whole society blames the rape victims and not the rapists.