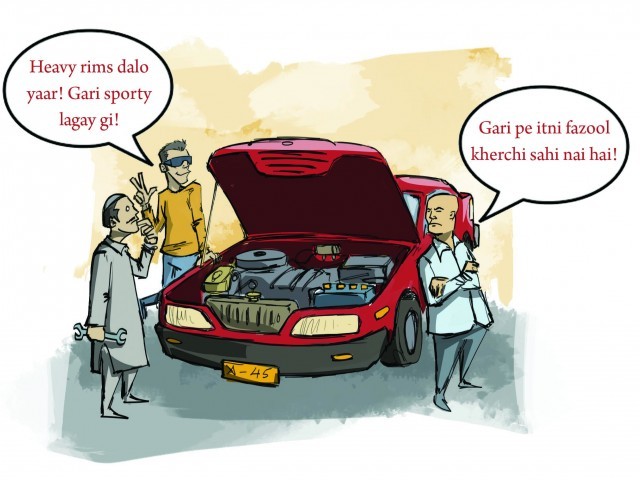 Just because someone else’s car is 'running fine' with those changes, doesn’t mean yours will too. DESIGN: JAMAL KHURSHID

We, as a nation, have one trait that dominates our behaviour in almost every walk of life and that is to follow the crowd. We’d rather do what everyone else is doing instead of using our common sense, even if the majority is wrong. In local terms, we call this trait bhair chaal (follow the crowd).

Unfortunately, we do the same when it comes to dealing with cars.

Our decisions are almost always hijacked by the opinions of other people; people who have little or no information about cars and yet, they do not refrain from commenting on what they don’t know. And this is often done with utmost confidence.

The one thing that is accorded the least importance is the instructions manual provided by the company that built the machine being discussed. We would rather listen to our relatives or friends who have little or no knowledge about the workings of the vehicle than give heed to what the manufacturing company has to say about using and maintaining the car.

Here are some of the behaviours that usually lead to bad car maintenance in Pakistan.

When you ask someone why they haven’t changed particular parts of their car as per the maintenance schedule, a very common reply is that it would be a mistake to do so since the car is currently running on ‘genuine parts’.

The idea that these ‘original parts’ might wear off eventually doesn’t seem to cross their minds. Furthermore, the manufacturer’s opinion, given in the car’s manual, is conveniently deemed wrong. After all, what would the manufacturer know about the car they built? Let’s just rely on our friends and cousins because they know so much more about the machine.

Try convincing someone that things like the fuel filter, transmission oil and the like need to be replaced after a certain time period and this is the reply you are likely to get.

Their theory is that unless you hear rattling sounds from some component in the car or the vehicle faces a complete breakdown, any change of parts is fazool kharchi (extravagance).

3. Would this increase the re-sale value of the car?

A car is a commodity which in most parts of the world depreciates in value. But in Pakistan, a car is considered an investment and any expenses incurred on it have to reap some rewards.

So if you advise someone to make some necessary expenditure on their car’s maintenance, be ready to justify how this would be beneficial for them when they decide to sell it off and what returns they will get on this ‘investment’.

4. Everyone else does it

If you try to advise someone that the changes they are making to their vehicle are detrimental to its performance, their reply will probably be,

“You know nothing about cars and the changes being made are done by everyone, so it’s perfectly fine.”

What they don’t understand is that just because someone else’s car is ‘running fine’ with those changes, doesn’t mean yours will too. The idea that different cars have different specifications seems to be beyond many Pakistani car owners.

5. My mechanic ustad (coach) suggested it

Even if some agree that what is being done with the vehicle might not be correct, only a few will raise questions about it. Why? Because the ustad ji, who has been working at the mechanic’s workshop for the last three decades, knows best.

The fact that the vehicles on which he learned his primitive practices have ceased to exist is almost always ignored. Hence, many do or say nothing while their cars undergo the most tyrannous zulm (cruelty) at the hands of these old-school mechanics whose methods are far too ancient for machines that have a completely different technology and performance capacity.

Many of these detrimental changes are usually done to make the car look more like a sports car. Changes such as using cheap and heavy rims, extra wide tires, multi-coloured lights and alterations to the engine’s acceleration are done for cosmetic reasons under the argument,

(The car will look sporty)

However, as attractive as these changes might make the car ‘look’, an underpowered vehicle running on alternate fuel will hardly be able to pull its own weight with these add-ons, let alone speed like a sports car.

This reply is usually common with people who are fond of Sports Utility Vehicles (SUVs). As long as the car is running, they think there is nothing to worry about even if there are serious maintenance issues with it like a completely worn-off tire with clearly visible, swollen sidewalls.

Even if you urge the owner to take heed, he will remain least bothered because he has some kind of blind faith which assures him that no matter how serious a fault is, as long as he is successfully driving the car from point A to point B, everything is fine… kuch nain hota…

8. Buying spare parts from a jannay walay (someone they know)

Our vehicle markets are flooded with fake and stolen car parts and whenever someone is advised to buy parts from an authorised dealer instead of the shop around the corner, the argument given is that the shopkeeper is their jannay wala.

If they really were so honest and trustworthy, would they be selling fake parts in the first place?

Trusting dishonest people is not a very smart thing to do, is it?

9. Maybe if I ignore it long enough, it’ll go away

Due to insane amounts of money charged by authorised dealers for even the simplest of jobs, many people avoid taking their cars to get serviced there. Just hearing the estimated cost of a minor, routine check-up scares many people and they turn a blind eye to the maintenance or repairs needed, even if they run the risk of facing a breakdown.

The trust deficit on regular mechanics also adds to this dilemma and the result is badly-maintained cars. What people need to understand is that even though the cost seems high, it is usually a one-time expense after which the car not only runs smoothly, the servicing actually prolongs its life.

Lastly, just like everything else, we have a nagging habit of delaying things till the last second and being lazy in taking care of our vehicles. Just to avoid the hassle of getting better spare parts, doing a bit more research for the best parts available or just delaying maintenance for no apparent reason, we put our cars at risks.

All these aspects are integral to the Pakistani car owner and ‘Mast mahol te mitthay chawal’ (just take it easy) is perhaps the motto our people live by.

Contrary to what most people think, a well-maintained car keeps costs down in the long-run and gives a better driving experience.

So, don’t be lazy and get your car serviced regularly!

An automobile enthusiast with a keen observation, a seasoned telecom professional and a patriot. He loves to travel, read, write and work on his car.