Pakistan cannot be an ‘Islamic’ republic, not if women are being raped everyday! 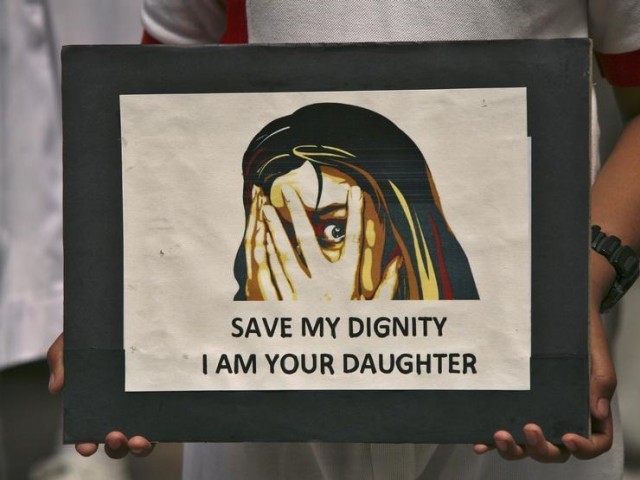 In Pakistan, if a woman is raped and she reports the incident, she is considered shameless, unworthy and the society shuns her. No one wants to marry her because she is no longer pure. PHOTO: REUTERS

On March 13, 2014 a girl from Muzaffargarh set herself on fire outside the local police station when justice was not served to her. This innocent girl was allegedly gang raped by five rapists, who were granted bail by the police.

People just stood there, watching her burn alive – as if she was giving a circus performance and our efficient media covered the incident from every angle possible to make sure it sold like hot-cakes on TV.

The mother threw sand on her daughter in an attempt to save her. And finally one policeman, among the dozens who were watching, remembered his duty and started helping the mother douse the fire. Unfortunately, the girl succumbed to her burns and passed away on March 14, 2014.

Rape is defined as any form of sexual behaviour forced upon another person but this definition is not complete. Rape includes sexual violence, harassment, verbal abuse, leering and threats. It is an act performed by people who use power to fulfil their lust.

The effects of rape on a victim are both physical and psychological and can lead to lifelong trauma, if neglected. Physical wounds can still heal but psychological effects stay with the victim for a long time. The victim may suffer from shock, depression, self-blame, loss of appetite, personality disorder, fear, a feeling of powerlessness and flashbacks. Sometimes the trauma is so severe that it can eventually lead to suicide.

In Pakistan, the situation is often even worse. If a woman is raped and she reports the incident, she is considered shameless, unworthy and the society shuns her. No one wants to marry her because she is no longer ‘pure’. This is why most rape cases are not registered. Some women stay silent to avoid the stigma and rejection while others choose to end their lives.

Unfortunately, our society turns the victim into a culprit.

Pakistan is considered an Islamic state that follows Shariah, based on the Holy Quran and Sunnah. Being an Islamic state, it is supposed to have a peaceful and just system whereby every human being, regardless of their gender or status, is treated equally.

Keeping this definition in mind, the Hudood Ordinance itself is a form of injustice and against Islamic principles. According to this ordinance, four adult Muslim men are required as witnesses before a rapist can be convicted. If we use common sense, we would realise that the victim herself can never produce four witnesses. If that were the case, wouldn’t the witnesses have stopped the rape from happening in the first place?

According to Sheikh Ahmad Kutty, a senior lecturer and Islamic scholar at the Islamic Institute of Toronto, if a person makes an allegation of rape against another person (male or female), he or she must produce four witnesses to support such an allegation; otherwise, he or she is guilty of slandering which is a grave offense in Islam that requires its followers to avoid tarnishing the honour of others.

Unfortunately, many rape victims have been blamed for adultery due to this ordinance instead of being treated as victims, simply because they were unable to produce any witnesses.

The Council of Islamic Ideology (CII) has been actively involved in making Pakistan an Islamic state with their unending support of the Shariah law. Recently, they proposed that the husband need not ask permission from his wife before getting married again, since he is allowed (by Islam) to have four wives.

I wonder if the CII understands that there are other societal issues which require strict laws to be implemented, rather than creating a nonsensical issue over asking permission. It baffles me that our leaders fail to protect a woman’s honour and sit by quietly while mothers, daughters, sisters and wives are raped on a daily basis.

Where does their Islamic ideology go then?

Yes, Pakistan is an Islamic state. But only in name. It is ruled by people who implement laws based on religion only to satisfy themselves and for their own personal gains.

This is not Islam; this is playing god.

Muzaffargarh was just one incident. There have been more and, sadly, there will be more because our laws have given these rapists a license to rape. Our laws allow hideous men to commit evil acts on women who are helpless and have no rights. These men are then allowed to run scot-free so that they can boast about their ‘manliness’.

I ask the leaders of Pakistan and the CII, is Pakistan really an Islamic state?

Are the laws of the country based on Islamic teachings?

Is this what justice is?

Will justice ever be served to the victims?

Unfortunately, given the sad state of affairs, we already know the answers to these questions.

No, Pakistan is not an Islamic state; if it was, no innocent life would be taken due to injustice.

No, our laws are not based on the Quran and Sunnah. If they were, we would have a peaceful society where each and every one of us felt safe.

No, this is not justice because if it was, no one would dare to commit such heinous crimes again.

And no, justice will never be served because our leaders are blinded by power and lust.

Laws in Pakistan are man-made and have little or no essence of Islam in them. And until something is done, things are likely to remain the same. Our women will keep on suffering and our leaders will keep on sitting on their thrones, making only those adjustments which are beneficial to them.

A graduate from the University of Amsterdam, she works as a Research Assistant at LUMS. Loves to travel and sketch fashion Illustrations. She tweets as @AbeerPervaiz (twitter.com/AbeerPervaiz)

The dark side of fairness products