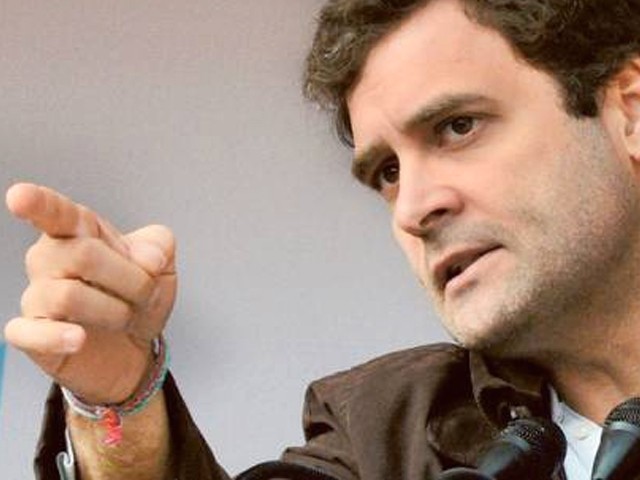 BJP was infuriated over a speech made by Rahul Gandhi in Maharashtra last month wherein he accused the RSS of being involved in the murder of Mahatma Gandhi. PHOTO: AFP

The Bharatiya Janata Party (BJP) wants the Indian National Congress (INC) to be derecognised by the Indian Election Commission.

The Hindu nationalist leaders of this party were apparently infuriated over a speech made by Rahul Gandhi in Maharashtra last month during his whirlwind poll campaign wherein he accused the former’s ideological mentor, the Rashtriya Swayamsevak Sangh (RSS), of being involved in the murder of Mahatma Gandhi. The 43-year-old said,

The RSS, apparently hurt by Rahul’s stinging remarks, has also filed a complaint with the Karnataka Election Commission. But this is not the first time that the organisation has been accused of committing this heinous crime. After Gandhi was killed on January 30, 1948 by Nathuram Godse – a Hindu nationalist and former member of the RSS – the group was caught in a cleft stick and banned by the then Home Minister of India, Sardar Vallabh Bhai Patel. However, the ban was revoked after eight months for lack of evidence.

Thus, the RSS managed to escape by the skin of its teeth.

One thing, however, that cannot be denied by the RSS is its cadres’ shameless conduct following the Mahatma’s murder. My grandfather would often narrate to me how he saw Hindu nationalists brazenly celebrating Gandhi’s murder by distributing sweets and bursting crackers on the streets while the nation mourned.

The author writes in his book,

“(Hindu nationalists) used to paste Gandhi’s photographs on the soles of their footwear as an insult to him. His photographs were used as targets in camps organised by the Hindu extremist organizations to train their cadres. These were the people who helped Godse and Apte in planning the murder, provided them with support, funds and equipment; they were the ones who celebrated his murder by distributing sweets and bursting crackers. They refer to the murder as ‘vadh’ – a Sanskrit word used to describe the slaying of a demon as when the forces of good kill the forces of evil, the killing of rakshasas (unrighteous spirit) in Hindu mythology.”

As the news of Gandhi’s death spread across the country and the people of India began to mourn the loss of their Bapu (father), the author writes,

“The shakhas (branches) of the (Hindu nationalist organisations) bore a festive look. Lamps were lit, flowers showered and firecrackers burst… Many of the branches of the (Hindu nationalist organisations) had been informed in advance and were prepared to celebrate. In Alwar, a handbill proclaiming Gandhi’s murder was circulated five hours before it actually happened.”

Alas, the Hindu nationalists justify the Mahatma’s assassination even today and glorify Godse’s murderous act by saying that he did it due to a sense of outrage at Gandhi’s pro-Pakistan stance to the detriment of Hindus. However, the truth is that they killed him because he had foiled their plan of a clean partition of the country and a Muslim-free India.

It was because of Gandhi that the Hindu nationalists’ dream of a Hindu rashtra (dominion) remained but a dream.

Nevertheless, although it is true that the RSS as an organisation cannot be held directly responsible for Gandhi’s murder, it cannot be disputed that it is their vicious ideology that inspired Godse to commit this heinous crime.

Let us be warned that violence is an invitation to more violence and it is not a solution to any problem. Godse might have been successful in killing Gandhi but he could not kill his idea.

After a failed attempt on his life by the Godse-Apte gang on January 20, 1948 the Mahatma said,

(They are children. They do not understand the situation now. When I am dead, they will remember that what the old man had said was right.)

His message of non-violence and brotherhood shall inspire us forever.