The ‘Bara Bhai syndrome’ – taking one family at a time 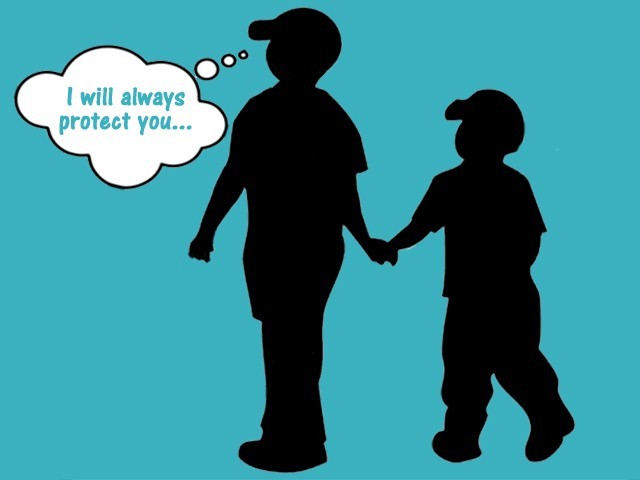 They are often seen in the junior section of school trying to keep an eye on their younger siblings during recess.

Recently, an international journal of psychiatry published a report about a new disease – the ‘Bara Bhai Syndrome’. It was discovered during research workshops held in Pakistan and India.

The hallmark of this disease has been described as an extreme preoccupation with the duty of providing care to the family, heightened sense of sacrifice and responsibility, feeling of guilt and premature ageing.

While the disease has been found to be more rampant in South-East Asia, thousands of immigrants in developed countries have also tested positive for it. The disease typically affects the first-born male child. However, comparable symptoms can also be exhibited by the only child or the most capable male child in a family, regardless of his position in the family tree. The severity of the symptoms is often directly proportional to the size of the family.

The birth of the bara bhai (big brother) is usually associated with a hypomanic episode in the family. Mothers breeze through labour pains, and baby blues are rapidly replaced by baby bliss. Dozens of mithai (sweets) are distributed by the delighted grandparents. The new-born bara bhai is proudly presented to the visitors in a carrycot; like a prince in a royal sedan chair. Bara bhai is absolutely thrilled at such an overwhelming reception and decides to always be a source of joy for his loving family, no matter what it takes; hence the preoccupation with duty of care.

In early childhood, the bara bhai would happily share his favourite toys with his younger siblings. If, however, instinctive avariciousness of childhood tries to take the better of him, mommy will scowl at him from a distance and remind him of his ultimate goal:

“Be nice to your siblings. Remember! You are the big brother.”

For the same reason, the conciliatory title of bara bhai would often keep him from kicking back the mischievous younger siblings. But if he gets belligerent at any moment, he is sure to be reprimanded for being callous, despite being a big brother. Also, unless proven otherwise, he is the ‘mastermind’ behind every disaster happening in the playroom, often earning him the worst spanking. Over the years, ‘it must be my fault’ becomes the default setting of his brain; hence the obsession with the feeling of guilt.

They often strive for excellence at school and it is drilled into their brains from kindergarten years to be the perfect role models for their little brothers and sisters. They are often seen in the junior section of school trying to keep an eye on their younger siblings during recess.

They start driving way before they are legally eligible for it and happily accept the ‘honorary’ job of sibling pick-ups and drop-offs. They don’t mind getting up in the middle of a biryani party to fetch some more yogurt from the corner shop or race to the bakery on their sports cycle to get chicken patties and cake to help mommy entertain the uninvited guests.

At puberty, the strength spurt of bara bhai outshines that of his peers and he is often found carrying most of the luggage during a family travel. However, it often becomes hard for him to cope with the testosterone surge, since the risk-taking behaviours associated with this hormone of aggression can stigmatise the family reputation.

Staying out with friends till late, rash driving, trying a cigarette or going out with a girl is extremely ‘contagious’ and the bara bhai must abstain from setting up such precedents, or else he will solely be responsible for leading his siblings astray. Therefore, they often leap straight from childhood into adulthood – hence, the symptoms of premature ageing.

Their first paid job brings back the same hypomania in the family. But this time, the cuddles and snuggles are often accompanied with ‘a wish list’. From this day on, it would only be them who’d pay whenever the family would dine out and they’d actually get very sensitive if someone else tried to steal the honour.

Filling the fuel tank of the family car or paying bills to the cable wala (cable man), akhbar wala (newspaper man) or the paani wala (water man) standing at the gate are small examples of things they would do, without ever being noticed. They often get you the best graduation presents and thoroughly love sponsoring weddings or Hajj pilgrimage for the family. Gradually, depending upon the socio-economic status of the family, bara bhai would take a few or all the financial responsibilities on his shoulders.

Some baray bhai go abroad, to study for higher degrees while others go looking for greener pastures, when supply can no longer meet demands. Once there, the little time they are left with after the end of a long day is spent juggling between Skype, Viber and Western Union websites. Their bucket list here contains two things for sure – organising a family trip, and earning them all a foreign passport in the long run.

They are told from their childhood that “big brothers don’t cry”; hence, most of them grow into adults who lack verbosity and expression. Whether or not they cry behind closed doors is still unknown, but they certainly toss in bed with pain if any social, medical, financial or emotional calamity befalls their family back home. However, quite ironically, they are still sometimes accused of “going away and abandoning the loved ones”.

Although the bara bhai is actively involved in all important decision makings of the family, he leaves the most important decision of his own life in others’ hands – choosing a spouse. He knows that choosing a ‘moon-like’ bride for him is his mother’s ultimate dream and he shouldn’t shatter that at any cost.

Whilst baray bhai’s ammi jaan has taken a fancy to her chatterbox niece, adores the silky dark hair of a South Asian Rapunzel she saw at a wedding and is full of awe for the cooking skills of her friend’s daughter, she wouldn’t want to settle for a girl less than an epitome of beauty, brains and domestic skills all at the same time.

Quite understandably, the hunt can take a while and in the meantime, if the bara bhai accidently falls in love, he has to make a strategic plan to break the ‘bad news’. It’s a tough time whilst mommy goes through the first four phases of grief – denial, anger, bargaining and depression – before finally arriving at the stage of acceptance.

At the time of his marriage, (which usually cannot happen before at least one of his younger sisters is wed-locked), bara bhai is determined to keep a balance, but very soon, as the tug-of-war begins, he feels himself like a new physics student trying to balance a meter rod on the sharp edge of a wedge.

In an attempt to please everyone around him, the altruistic big brother often tragically ends up pleasing no one. He feels helpless and dejected, and the only place he finds solace in is in front of the television while he rapidly switches from one channel to another – a temporary sense of control and power to change the things as you wish.

Disclaimer: It is a satirical piece and bears no real association to any journal of psychiatry.