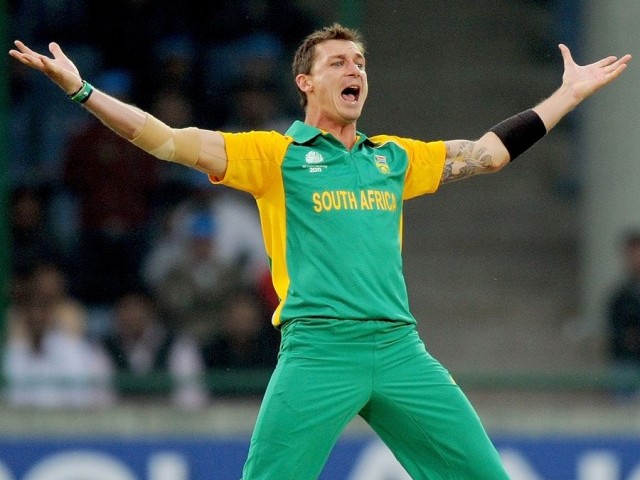 In a time when fast bowlers, generally, tend to struggle and batting averages have inflated, he has managed to keep the art of fast bowling alive. PHOTO: AFP

While the whole cricket fraternity was going gaga over Dale Steyn’s bowling heroics during the second Test match of the last series played between South Africa and Australia, a couple of my friends came up with a peculiar yet interesting theory.

According to them, due to the dearth of good fast bowlers in Test cricket, batsmen, in general, have become complacent, and as a consequence, their techniques have become more vulnerable against top quality swing bowling. Some very good bowlers, taking advantage of the technical deficiencies of modern batsmen, have mustered up career figures that are comparable to the best of all time, even if they aren’t as good as the greats of the yesteryears.

Dale Steyn celebrates the wicket of Australia’s Michael Clarke during the fourth day of the second Test. Photo: Reuters

Dale Steyn, Ryan Harris, Vernon Philander and Mohammad Asif have benefitted from modern day batsmen’s vulnerability against quality swing bowling more than anything else and hence they are overrated, they argued.

At first, I thought that the theory had some merit to it, so I gave it a long thought over a couple of days. However, I soon found myself disagreeing. Instead, the more I thought about it, the stronger I disagreed.

Nevertheless, the hypothesis, even though it may not have been very sound, still deserved to be analysed closely.

While people have their doubts about Harris, Philander and Asif’s bowling, Steyn has already been widely accepted as the only bowler of his generation who belongs to the pantheon of the all-time greatest fast bowlers for exactly the opposite reason to the aforementioned one. In a time when fast bowlers, generally, tend to struggle and batting averages have inflated, he has managed to keep the art of fast bowling alive. His stats are impressive and his strike rate remains better than anyone who has taken 200 wickets.

In addition to that, he’s almost Bradmanesque when we compare his stats with his peers, which further strengthens his place as a great of all time, for peer comparison is an excellent way to evaluate the worth of a player. Therefore, it’s almost nonsensical to question his place in the pantheon of the all-time greats.

Even with Harris, Philander and Asif, their near perfect record can’t be brushed aside just because of a hypothesis, which has no empirical evidence to support it. People questioned Asif’s lack of pace, and they underrate Philander due to the same reasons. However, I’ve seen that the same people, on the other hand, while discussing Sir Alec Bedser, Fazal Mahmood, or Frederick Spofforth, refer to them as wizards and never undermine their greatness, ironically. Before I digress too far away, let’s go back to discussing Steyn again.

So what is it that is missing in Steyn’s bowling that makes some people believe that Steyn is, somehow, an inferior bowler to the likes of Imran Khan, Sir Richard Hadlee and Michael Holding?

Despite trying my best to figure it out, I couldn’t find any missing link in his bowling. As a matter of fact, he, in my opinion, is a more complete bowler than any of the ones mentioned above, because of his versatility. From whatever little amount of Test cricket I’ve had the privilege to watch, I’ve arrived at the conclusion that genuine pace, combined with prodigious lateral movement and immaculate control, gives nightmares to every batsman in the world, even Sachin Tendulkar, Ricky Ponting, or Brian Lara. Dale Steyn is gifted with all those skills.

I have not had the opportunity to see Hadlee and Dennis Lillee, who are considered the greatest fast bowlers of all time, in action – barring a few videos of them on Rob Moody’s YouTube channel – but the picture, after reading about them, is something very similar to that of Dale Steyn. Both had outswingers as their stock delivery with new ball, and both possessed immaculate control.

Steyn is very similar with new ball. He has perhaps more in common with Lillee than Hadlee because of that extra yard of pace and that extra bit of aggression.

However, this is only as far as skills with a new ball go. With the old ball, he has the extra dimension of having the ability to reverse the ball. We don’t need to go any further than considering his performance against India in Nagpur and Durban, and his very recent spell against Australia in Port Elizabeth to realise how good he is with the reverse swing.

Dale Steyn bowls on the third day of their first test cricket match against India in Nagpur. Photo: Reuters

He gets the ball to reverse as late as the laws of physics allow, thanks to his fiery pace, which leaves the batsman with literally no choice. At present, no other bowler in world cricket, barring Junaid Khan, comes anywhere near Steyn with regards to the reverse swing. If lush green outfields or some other factors prevent the ball from scuffing up properly and he doesn’t get the ball to reverse, he resorts to the barrage of short pitch deliveries with a cross seam release, which isn’t any less of a challenge.

An undergraduate student of Computer Science at FAST-NU, Lahore, who is an avid reader and a cricket enthusiast. He tweets as @Ahmad_Saleem (twitter.com/Ahmad_Saleem)