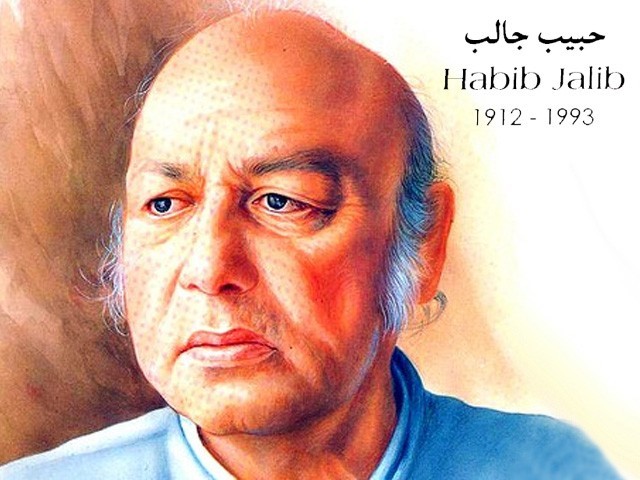 Jalib always used to censure those people who were in power and always supported democrats against dictators.

There was a man who audaciously used to say,

(I refuse to accept)

He was neither a bourgeois nor a feudal and surely, he was not patronised by any ‘third force’ (Teesri Quwwat) that has a hand in every incident that takes place in Pakistan. He was an ideologue, charismatic and an eloquent poet. Moreover, he was best known for his revolutionary zeal. He struggled for the restoration of democracy and human rights. His enthralling poetry elucidated the notorious rule of dictators. However, his poesy still befits today’s political setting. That man was none other than the great Habib Ahmed Jalib.

Dastoor was not only a piece of poetry but it was a denouncing voice against Ayub Khan’s self-seeking constitution. Arguably, Dastoor had reinvigorated anti-Ayub Khan elements which were crushed by the regime earlier. Since then, it became widely popular and it appealed to the masses so much that, Jalib was requested to recite it wherever he visited.

(This constitution, this dawn without light

Resultantly, Khan bestowed his blessings on Jalib and sent him to prison. But even this could not restrain him from expressing his disagreements in the form of poetry. In fact, he mocked Khan’s adviser satirically by penning a poem – Musheer.

(You are the light of God

The nation is with you

It is only by your grace

That the nation can be saved)

When Yahya Khan took charge of the state’s apparatus, it was assumed that Jalib had succeeded in his mission, the ouster of Ayub Khan, and will divert his focus on other societal issues but it was nothing than a misbelief. He provoked Yahya Khan by saying,

(The one who before you, here, was enthroned

Also had illusions of being our god)

Arguably, Ziaul Haq’s regime constituted the darkest era in the history of our country. The patronage of extremists by Zia had radicalised our society and one can trace the roots of today’s terrorism in his policies. Moreover, he was disreputable for his barbarism and rigid control over society. Despite that fact, it was Jalib who intrepidly opposed Zia through his poetry. As a result, he was imprisoned by authorities and was directed to take out Zia’s name from this magnificent couplet.

(This dark night as dawn, these toxic fumes as a breeze

And a human as god I cannot write)

The most important thing one should know about Jalib is that he always used to censure those people who were in power. He never criticised opposition and former rulers of his time. He campaigned for Zulfiqar Ali Bhutto and Benazir Bhutto, and at the same time, he also criticised both leaders in his peerless style when both leaders ascended to power. Though, Zulfiqar Bhutto was a good friend of Jalibs’, his wrong policies and misgovernance provoked Jalib’s ire towards him despite their good relations. Moreover, he was also sent to jail in Bhutto’s era. Larkana was Bhutto’s constituency and it is still a Pakistan Peoples Party (PPP) stronghold. Jalib, therefore, eloquently signified Larkana and Bhutto’s authoritarianism.

(The proclamation has been issued by royalty/high authority,

Go to Larkana or go to jail)

Jalib was aberrant as far as materialism is concerned. He declined various opportunities given by rulers of his time including his close friend, Bhutto. Thus, his impartiality and dedication for his revolutionary work distinguished him from opportunists who belonged from the same political background.

His struggle was mainly against the dictatorship, therefore, he always supported democrats against dictators. When Benazir returned to politics in the late 1980’s, despite being treated ruthlessly by her father, Jalib lauded Benazir and wrote in her support.

When Malala Yousufzai was shot by the Taliban in October 2012, many progressives quoted Jalib’s poetry, which he had written for Benazir, in order to express solidarity with Malala.

Today, Jalib is not among us but his poetry still resonates in the hearts of many. On May11, 2013, we celebrated the historic democratic transition proving that democracy can prevail in Pakistan but we should not forget those people who dedicated their lives for the struggle against dictatorship.

Democracy is prevailing because of people like Jalib who dreamt of a pluralistic Pakistan. Unfortunately, we have a bitter track record of ignoring true heroes because of their religious beliefs, sects and ideologies such as Dr Abdus Salam and Malala Yousufzai. Jalib is also one such personality.

Our school curriculum glorifies warriors such as Mohammad Bin Qasim and Mahmud Ghaznavi, while concurrently, lacking the teachings of true intellectuals and constructivists such as Jalib.