Slapping sedition charges? Must have been BJP’s idea! 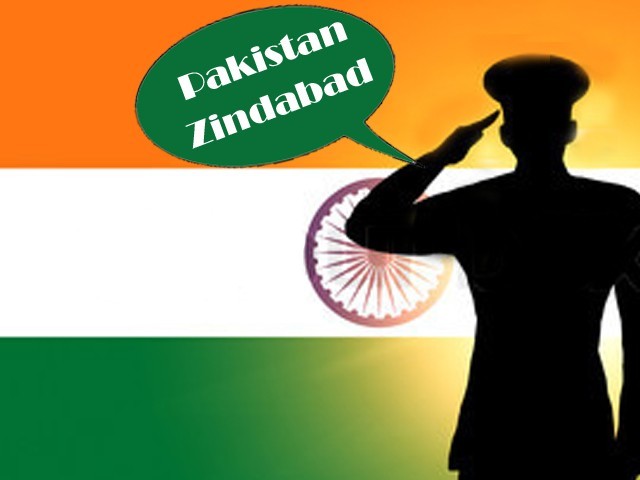 I love Pakistan as much as I love India and as an Indian I would like to say 'Pakistan Zindabad'.

Doting on Pakistan is apparently a heinous crime in India. Why else would the Uttar Pradesh government slap sedition charges on 67 Kashmiri students in Meerut for cheering the Pakistani cricket team and chanting innocuous slogans like Pakistan Zindabad?

“Anybody who lives in India, breathes the air of this country and raises a slogan like Pakistan Zindabad, should be legally persecuted and charged with sedition.”

Ha! Truly speaking one could not expect anything better from the Hindu nationalist party whose prime ministerial candidate is Narendra Modi, the man who threatened to wipe Pakistan off the world map in 2002, while addressing a public rally in Gujrat,

If this is not fascism, what is? This is certainly not nationalism or patriotism. What else can be expected from the followers of this man who is capable of making such an outlandish and dangerous statement?

At this juncture, I, for one, would humbly entreat the people of India, especially Hindu nationalists, to ask themselves a few simple questions and reflect deeply over this issue.

What is Pakistan? Who are these 180 million people residing in this beautiful country? What is their relationship with the people of India? And above all, are the people of Pakistan our enemies?

As a matter of fact it is only by virtue of providence that Pakistan came into being in 1947. Had our ‘great’ leaders shown even a little maturity and vision, there would have been no partition and we would still be one and living together as brothers.

The British, along with other western powers and our own reactionary, short-sighted leaders, schemed to divide our people on the lines of religion and thus, sowed the seeds of perpetual hatred and distrust in our hearts.

(A mistake of a few seconds has brought punishment for centuries.)

But at the same time I know that the ‘mill cannot grind with water that is past’. The die was cast and Pakistan is a reality. My only endeavour here is to remind the people of India and Pakistan that we are blood brothers and that blood is thicker than water.

Needless to say except for religion, there’s hardly anything that differentiates us. And it is a pity that despite our special relationship, our shared history and culture, the hate-factories have been allowed to flourish unabated on both sides.

Pakistanis are not our enemies; they have never been. Indians and Pakistanis are twin brothers who were separated at birth in 1947.

Don’t brothers fight amongst themselves? But is it right for us to treat each other as enemies? Is this incessant, mindless conflict and poisonous hatred justified?

In my opinion, it is not because Pakistan is not just any other country for us. The people of Pakistan are special because of their special, unbreakable bond with the people of India. No matter how hard one tries, this bond cannot be broken.

Thus, in view of this special relationship, why should anyone be flabbergasted and dismayed to know that there are people on both sides of the border who dote on each other?

Yes, it is a fact that the people of our two beautiful countries are truly, madly, deeply in love with each other. Is it not true that not a single day passes when we don’t think of each other, when we don’t peek through the heavily manned borders to find out what’s happening on the other side?

Above all, is it not true that we are obsessed with each other?

If this is true, then why should loving Pakistan in India be a crime and vice versa? Why should Kashmiris, and secular Indians – and there are millions of them including me – be punished for doting on Pakistan?

Yes, I love you Pakistan. I love you as much I love India since for me there’s no difference whatsoever between these two countries; they are two sides of the same coin. Yes, my heart beats for the people of Pakistan and I wish we could live together as brothers once again. Today, I, as a citizen of India, want to take this opportunity to wish Pakistan and its citizens well for their future and say Pakistan Zindabad.

Will I now be charged with sedition for this?

For me though the bigger sin would be to hide and subjugate my feelings for the people of Pakistan. But if loving Pakistan is a crime, I am as guilty as those Kashmiri students.

Nonetheless, the truth is we have been brothers and we will always remain brothers. That day is not far when we shall meet again in the same spirit of friendship that has always bound us together. I know that our relationship is going through turbulent times and is in dire straits but let’s remember that the darkest hour of the night is just before dawn.