Pakistani media should learn something from India’s Satyamev Jayate 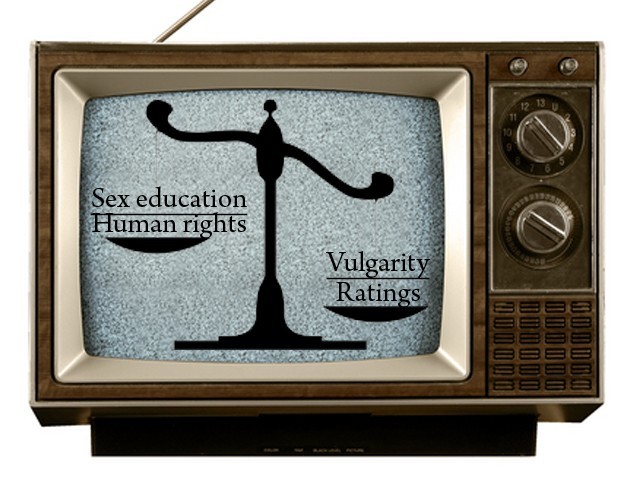 The channel which defamed and criticised a respectable educationist for ‘corrupting the youth’ of Pakistan, every now and then airs inappropriate content during prime time, which is full of sexual references.

Hypocrisy is one of Pakistan’s most wide-spread epidemics. The channel, which defamed and criticised a respectable educationist for ‘corrupting the youth’ of Pakistan by imparting sex education, occasionally airs inappropriate content full of sexual references during prime time.

How exactly are we supposed to explain to our children what rape, ziyadti (dishonour), prostitution and najaiz jinsi taluqaat (inappropriate sexual relations) are when they hear these words on TV? Not only is the timing inapt but sometimes, it is also the content.

Most of the channels have identical programs in which they ‘expose’ selected evils of the society. Some months ago, a channel aired a story about a father who had sexual relations with one of his daughters, and had impregnated her. This channel ruthlessly questioned the child about the incident and she narrated that he used to intoxicate her when she would protest.

Instead of offering her protection and psychological help, they inflicted further psychological damage by making her talk about the traumatising experience in their hunger for ratings, not to forget the stigma which gets attached to people who appear on these programs.

In countries such as the United Kingdom and United States of America, people criticise sex offender registry because of the stigma it attaches and the serious repercussions it has for those convicted. On the other hand, Pakistani channels play a major part in disgracing alleged offenders and criminals, through conducting a media trial. This takes away their right to be considered innocent until proven guilty.

Brothels and internet cafes situated in the underdeveloped areas of the country are raided and exposed. But the illegal activities, such as prostitution taking place in three and four stars hotels of the country, go unreported because of the influence and resources of those involved.

A wrong is a wrong irrespective of who the culprit is.

However, my basic reservation is that, why is it that these channels only ‘expose’ people belonging to the lower middle and lower classes?

Forced confessions of alleged offenders are aired frequently and it surprises me that the courts never take notice of this, neither do the courts or Pakistan Electronic Media Regularity Authority (PEMRA).

A mere parental guidance sign does not suffice as notice.

These programs end with a quick line about how the government should take notice, amend or implement laws.

Should this not be the primary focus of these programs?

There are hardly any programs or shows which educate people about their rights, review current legislation and push for reform in legislation. Intellectual debate on television is almost non-existent. No, inviting political workers to fight does not amount to intellectual debate. And how can there really be any intellectual discussion when half of the nation is hooked on Turkish dramas, morning shows and programs about black magic?

It is frustrating to come across shows in which Meera is questioned about what she did within her private premises and hear her come up with bizarre stories to cover it up, or Veena fighting with a clergyman. They are not running for elections and they do not owe anyone any explanations. Nobody demands any explanations from Mr Amir Liaquat for behaving the way he does because if Meera and Veena behave in a manner not fit for a Pakistani, then he also behaves in a manner not fit for a ‘religious scholar’.

Even though Aamir Khan in Satyamev Jayate has addressed extremely sensitive issues from sexual and domestic violence to female feticide, he has done it with certain dignity and grace intact. The program shows interviews of victims and their families, but it in no way cashes in on their misery.

The best aspect of this program is its primary motive of not airing India’s dirty laundry to the world. Instead, it presents the facts in a dignified manner and most of the program is dedicated to finding solutions. It educates people.

For example, in one of its episodes, it showed how alcoholism can ruin your life and how one can get help, suggested how medical examination of rape victims should be uniform in all hospitals and the likes. It sheds light on where the state lacks in provision and protection of human rights and urges for reform and how the society needs to change its mind set.

I hope Pakistani channels take a leaf out of Satyamev Jayate’s book. The nation does not need to be shown the face of a rape victim as that is not what it is all about. Instead, we need to address the fact that despite laws being enforced, between January 2012 and October 2013, there were 268 cases of sexual assault, 344 cases of rape, 72 cases of burning victims, 481 of domestic violence, 860 of karo-kari and 90 of acid burning.

We have bigger fish to fry than raiding private premises where poor people watch pornography for a mere Rs10 per movie.