20 and about to get married? Say goodbye to your dreams and careers 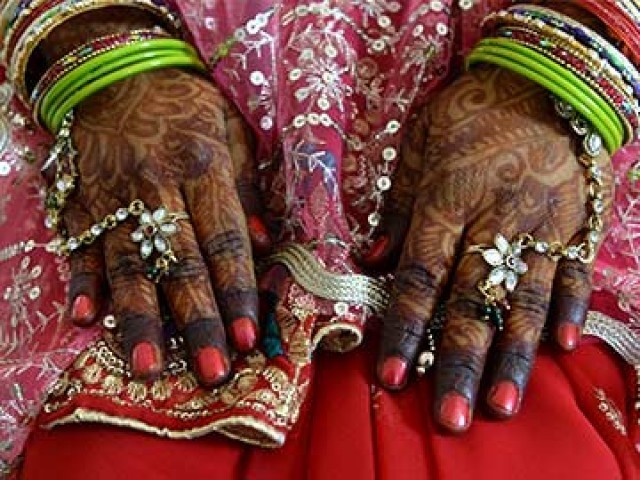 What guarantee can you give your daughters that they will live happily in a marriage they did not have a say in? PHOTO: AFP

“I can’t wait to pursue my bachelor’s degree abroad,” I beamed with delight.

With disdain, as if I had said something extremely outrageous, I was asked,

“Wait, are you not going to get married?”

Recently, my Facebook newsfeed was flooded with pictures of bridal and baby showers of girls whom I went to school with. I am 20-years-old and some of my friends are already married and have children. While I was taken aback by this at first, soon realisation began to hit me.

This was it. This was the end of these young girls’ carefree lives and that too at the ripe and young age of 20 – or even less, for some.

They will be expected to take on the roles of housewives and deal with household problems that they shouldn’t have to deal with at such an early age. At this age, they were supposed to be having fun, finding themselves and enjoying their lives but they find themselves in the clutches of social norms. This is, sadly, the end of their adventures and silly experiences.

The sad part about the entire thing is that these girls are conditioned from a very young age by overly-conservative mothers to think that the greatest thing that can ever happen to them is marriage. They spend their lives keeping themselves presentable and in shape, and go to all the right weddings where they can be scouted by beady-eyed rishta aunties.

Right now, all I can think of is my career and university life, whilst these girls face challenges that I do not even need to imagine for a good five to six years at least. At 20, you are young, inexperienced and are facing all these issues that you do not have any clue as to how to deal with them. I am sorry but they do not offer ‘marriage 101’ in schools.

Basically, an eligible bachelorette is someone who is pretty, skinny, pious, tall and fair. And in these competitive times, if the girl has a university degree then that is a cherry on top for the mothers-in-law. This means they can flaunt their daughters-in-law’s highly qualified degrees at their kitty parties and increase their own popularities.

So yes, you can have your degree honey – the one you worked for your entire life with your parents’ savings. But there’s just a tiny problem – you cannot use it.

Pakistani men cannot even imagine the worsening plight of women because they already have a rigid mind set on how a woman should think and behave. I am sorry boys, but unless you suddenly turned into a female, you do not understand anything. It is hilarious how men actually think they can comment on a woman’s life when they have absolutely no clue on what it’s like. Men always have options but women do not.

The average Pakistani man is so afraid of being emasculated that he dares not ask for a woman with a voice. However, I am not in any way saying that all men resort to such sexist attitudes. Do note how I use the word average and not all.

However, there are women who want to have a career and are promised so by their in-laws, that they can work or study after marriage. However, as soon as they agree to the marriage, is exactly when reality hits these girls hard in the face.

The husband frowns, the relatives talk and make all sorts of assumptions and unfortunately, she has no choice but to give up on her dreams and her career. Why so? Because of the following, horror-inducing phrase that has ruined many lives:

(What will people say?)

My question is can a woman in Pakistan not pursue a career? Will it ruin her chances of getting hitched to some well-off doctor in the US with a nice family? What guarantee can parents give to their daughters that she is going to be happily married to a man she never agreed to marry in the first place?

For instance, I was at a friend’s wedding and I teased her about the possibility of her husband being extremely handsome. To this, she replied,

At that particular moment, I think I almost fell off my chair and uttered a silent prayer of gratitude to have such inspiring parents who encouraged me to always chase my dreams and not be tied down by the conservatism in our society.

To all the young girls out there, I encourage you to please stand up for what you deserve. No, I am in no way discouraging marriage but only making a point that women should get married on their own terms and only when they think they are ready for such a life-long commitment.

I know many girls out there do not have a choice but to listen to demanding parents, and that is why this culture needs to stop. Parents need to understand the importance of educating their girls so they can be financially independent and can contribute towards a happy marriage instead of believing that only early marriages would bring them honour.

A man who does not have to shoulder the entire financial burden of the house will be content and will respect his partner for sharing the burden with him. And if he is not the kind of person who is going to support you in your decisions to work after marriage and share the burden with him, then well, he is not the person for you no matter how much of a perfect doctor or engineer the rishta aunties make him out to be.

A 20-year-old graduate from Nixor College who is currently studying Korean at Seoul National University. She is living the dream in Seoul whilst planning for the future.

South Korea: Why I prefer to live in the East rather than the West