Kashmir will celebrate the Indian cricket team’s loss, no matter who they play against! 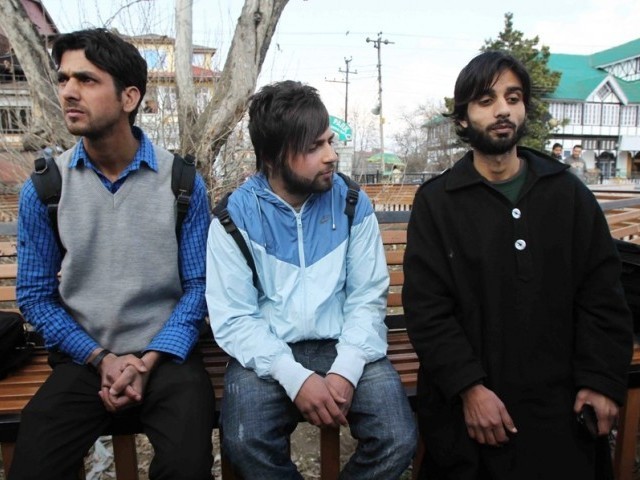 Meerut is not Srinagar by Shivam Vij published on March 7, 2014 justifying sedition charges on 67 Kashmiri students by a private university in Uttar Pradesh India, is a new addition to journalistic literature on Kashmir. Premised on the ‘exodus ’ of Kashmiri Pandits in 1990, the author draws anachronistic comparisons of two contextually disparate events.

In theory, if there is any Kashmiri nationalism, it is of the state sponsored variety. Kashmir’s association with cricket is only occasional.

It is not the win of Pakistan but the loss of India against any cricket playing nation that revives interest for cricket in Kashmir. India’s loss is a temporary relief from all the melancholy and grief that the people of Kashmir go through on a daily basis, inflicted by the Indian state and its military architecture.

“If there’s a big India-Pakistan match and you’re in Srinagar, you’d think you are in Pakistan”, writes Vij to draw home his point.

The 1983 cricket match between India and the West Indies, which the author uses to construct a definition of Kashmiri nationalism, and the 1986 India versus Australia match, made West Indies and Australia feel like they were playing on home turf;    given the way they were cheered and the Indian players were booed.

So, Kashmir is Pakistan.

But it is also West Indies, Australia, South Africa and the list is as long as the number of cricket playing nations, except India.

His source, strangely, is not a pro-freedom ‘separatist’ – a term which Indian journalists are as much obsessed with as their profession – but an activist and an anonymous one. Here, as I said in the beginning, is a new addition to the journalistic literature on Kashmir. Pro-freedom Muslims in Kashmir are now activists.

Vij asks a Kashmiri Muslim journalist his opinion “on the idea of Kashmiri Pandits returning to their homes”. The answer makes Vij conclude that this journalist cannot “decide whether someone could return to their home or not”.

Not only have Kashmir’s pro-freedom leadership failed to answer such questions (although they have time and again asked the Kashmiri Pandits to return) but Pandit organisations have also miserably failed.

Panun Kashmir, an organisation working for the rehabilitation of Pandits in Kashmir, have for a long time demanded a

‘homeland in the shape of Union Territory spreading around the northern and eastern part of the Jhelum river’.

This ‘cluster policy’ has been rejected and is seen as a ploy of “settlement of members of Rashtriya Swayamsevak Sangh (RSS) and other Sangh Parivar groups”. According to Vij, any Kashmiri Muslim believes the cause of Pandit ‘exodus’ was an Indian conspiracy.

“The idea was that if the Indian forces moved in to suppress the Kashmiri (Muslim) armed rebellion with the Pandits living amongst them, there might have been reprisals against the Pandits”, he writes.

I wonder which class of Kashmiri Muslims (as he emphasises time and again) he has been talking to.

Maybe to those stunt-men, who call themselves journalists, who, in acts of self-promotion, make music appear blasphemous in Kashmir?

“Does that mean, I asked them, that they would indeed have killed their fellow Kashmiri Hindus in retaliation for Indian forces killing Kashmiri Muslims for rebelling against India?”, he goes on with the imaginary conversation he has had with anonymous Kashmiri Muslims.

Sanjay Kak, a Kashmiri Pandit and an independent documentary maker, perhaps provides a convincing analysis of what led to the Pandit migration. In an interview with David Barsamian, Sanjay Kak said,

“But I think what we don’t recognise is that in that chaos there were all kinds of forces who would use that community in order to achieve other ends. We’re talking about, say, a population of probably not more than 150,000 people. And it is true that in 1990 and 1991, about 200 people from this small community were killed. Of course, it’s also true that in that same period probably 8,000 Kashmiri Muslims were killed. But we’re not doing math here, we’re not doing an equation of how many more people died because it’s true that even in a minority of 150,000, if 200 get killed, it is going to panic those people”.

He further adds that,

“It’s very difficult to say who wanted to precipitate in a crisis. Because if I were an extremist fringe militant organisation, I might want to attack Kashmiri Pandits, in order to precipitate a certain polarisation between the communities. It could be argued that from the Indian state’s point of view also, the targeting of the Kashmiri Pandits served a useful purpose because it allowed the Indian state to paint the movement there, which saw itself as a movement for the liberation of Kashmir, as a fundamentalist Islamic movement.”

Going by Vij’s logic, Kak is not ‘honest’, as he doesn’t see Kashmiri Hindus as ‘Indians’.

I may ask Mr Vij very politely why dream of ‘a world’? Why not dream of ‘my world’? Your own world?

Again, asking politely, who is he to dream of a world inhabited by a billion of us?

So Mr Vij is justifying charges of sedition slapped on Kashmiri students based on a hypothetical, imaginary situation which may or may not have taken place. According to Vij, the sentiment of Indian students against Kashmiri students is the same as that of Kashmiri Muslims against the Hindu minority.

This argument is flawed. It is irrational and lacks substance.

But Kashmir would accept his logic because that proves Arundhati Roy right when she says,

“India needs azaadi (freedom) from Kashmir just as much as – if not more than – Kashmir needs azaadi from India.”

To validate his point and justify the action taken by the university against these students Vij asks,

“How acceptable would it be to a Pakistani if some in Pakistan openly and publicly cheered for the Indian cricket team in a match against Pakistan?”, forgetting he has already answered the question above.

“He’d be delighted but that’s just him!”

Narcissism, I tell you.

“The argument of Kashmir’s occupation is somewhat irrelevant here”, because what is relevant is the

“Cricket is a menace”, because it shows your true colours. It makes clear the fact that even those who “run away from big media” are prone to get infested by the nationalistic jingoism.

Finally, Shivam Vij agrees with Omar Abdullah. They have everything in common.

Both of them believe Meerut is not Srinagar and Kashmiri students are misguided.