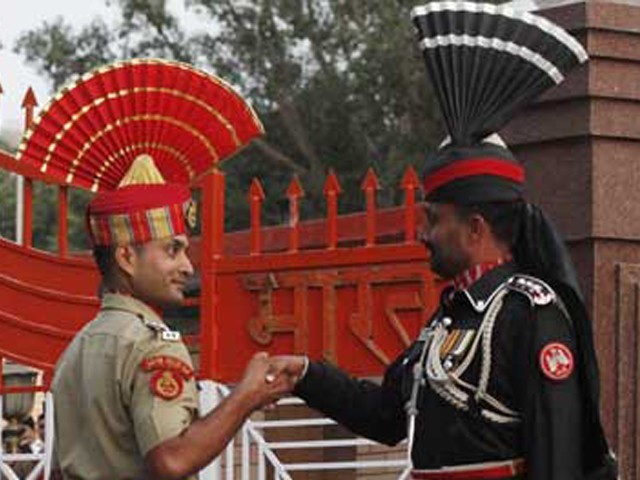 Cricket is linked to patriotism in both Pakistan and India. It is their chance to engage in war without actually going to war. PHOTO: REUTERS

The news that 67 Kashmiri students were suspended in India after the recent Pakistan-India cricket match has generated quite a buzz. Social media is inundated with posts in favour of these students and people have tried to link it to fundamental human rights whilst describing the incident as a violation of freedom of expression.

The only reason, it seemed, that Pakistan spoke out against the incident was because the students had been cheering for Pakistan’s cricket team. We wanted to see it in the light of a person being persecuted in India simply because he or she spoke in favour of Pakistan. Although this may be the case in certain places in India, I don’t believe this incident was one of those cases and it would be prudent not to link this incident to our Pakistaniyat (nationalism).

I believe that any anti-national cheer by a crowd has the potential to lead to violence anywhere in the world and the university did due diligence on its part and ‘secured the parameter’ by suspending these students.

I ran a quick search on Twitter to identify the popularity of the story.

Here is what turned up:

As can be seen, most of the top tweets imply that the students were suspended and charged with sedition for merely cheering for Pakistan’s team. However, according to the Vice Chancellor of the university, Mr Manzoor Ahmed, the students also raised ‘anti-national’ slogans. BBC News India quoted him saying,

We must understand that cricket is linked to patriotism in both Pakistan and India. Always. Cricket is not a ‘just a game’; it is a battlefield for both countries to vent their anger and frustration at each other and to demonstrate their relative superiorities. It is a conquest. It is their chance to engage in war without actually going to war. It may look peaceful but it has ceremonial value.

The Kashmiri students in Uttar Pradesh (UP) were wrong, period.

Freedom of speech must not pervade the personal space of others and it must never have the potential to incite violence. The actions of these students instigated violence; whether it was intentional or not is for the courts to decide. Given UP’s history of communal riots, with the most recent ones having taken place in Muzaffarnagar in 2013, don’t you think the students should have exercised a measure of caution?

More importantly, why were anti-India slogans raised during a sporting event anyway?

I believe that the students were not penalised for simply harbouring and vocalising a sentiment, they were penalised to ensure that the probability of any violence and destruction was controlled. These were damage control efforts taken by the university. Any organisation faced with a similar situation would probably have reacted in a similar manner. The prime duty of the administration, be it of a university or a country, is to ensure that law and proper decorum is maintained. The university suspended these students simply to ensure this.

The students were not suspended for merely raising pro-Pakistan slogans. India has worked far too hard to become a democratic and tolerant nation to actually prosecute these students, were this simply a case of misplaced loyalties.

Cricket between India and Pakistan is a common denominator that can be used to promote peace or incite hatred. Hence, polluting it with anti-national sentiments and rhetoric would only hamper any peace efforts in South Asia which is detrimental to long-term growth of both, India and Pakistan.

As the saying goes, there is a time and place for everything and this certainly was not the right time to shout out anti-India slogans.

While the right to free speech exists, it must not incite hatred in any situation, it must not infringe upon the rights of others. Freedom of expression comes with the responsibility to recognise the consequences of one’s words. It is no wonder then that in the case of Chaplinsky versus New Hampshire (1942) the US Supreme Court determined that free speech is not an absolute right.

The only reason that the issue is getting this much publicity is because of the India-Pakistan game. And it is precisely this variable that must be removed from the picture to understand that the decision to suspend the Kashmiri students was fair – if they did, in fact, raise anti-nationalist slogans.

To address this issue with utmost neutrality I asked myself,

“What would I have done if I were the vice chancellor of that university?”

The answer was a no-brainer. Given the numerous social and political dimensions which inherently make the decision-making process complex, I would definitely have made the same decision to ensure that public safety was not endangered.

We must understand that the most sensitive issue in India is probably the relationship between Hindus and Muslims. Stories of scores of Muslims being butchered are not just some ghastly recollections of our elders from the time of partition. Religion has always evoked the strongest of sentiments among human beings and history is testament to the fact that such strong sentiments have paved the way for some of the worst bloodshed that modern history has to report.

As such, the university did what any reasonable entity would and should do.