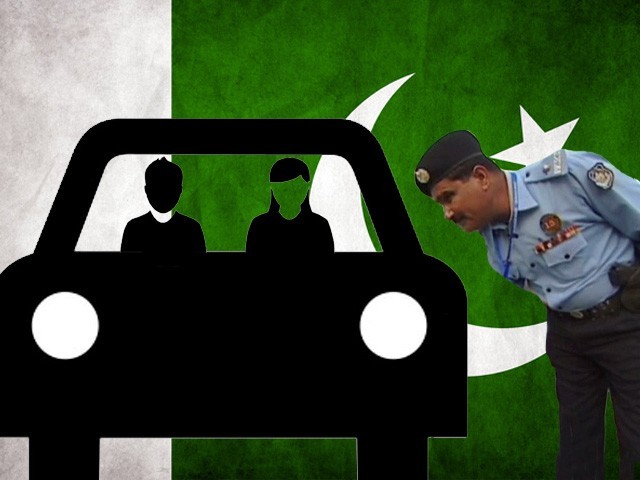 What right does any law enforcement member have to question your relation if you're not violating any code of decency?

A few days ago, as a friend was dropping me back home after dinner; we were pulled aside by the cops on main Khayaban-e-Shahbaz road in Defence, Karachi.

No dark corner or shady alley but while driving smack in the middle of a bustling road. While we pulled over the car, the men in uniform, (who in all likelihood belonged to the Darakshan police station since the area falls under that jurisdiction) asked my friend to get out of the car. As expected, he was asked to produce the required ‘kaaghzaat’ and give details of our whereabouts. Upon inspection and failing to find any reason to grill him further on the paperwork, he decided to focus his attention on the nature of our relationship.

“Yeh kaun hain aap ki?” one of them questioned in an authoritative voice.

(How are you related to this girl?)

(She is a friend)

(You do know that this is not allowed in Defence or Clifton.)

My friend who was completely baffled by this point retorted,

(What exactly is not allowed?)

The second cop who had been silently observing until now, probably figured that they would have fared better if they had picked out their ‘targets’ a little younger and a tad more naïve. Both of us were ready to go to the police station with them until they could prove what exactly it was that we were doing wrong. And that was clearly not part of their plan.

Seeing our refusal to budge or pay, they eventually decided we were too much effort and let us go.

As soon as my senses settled down and had time to process what just happened, I hastily began to Google section 294. For those of you who do not know, section 294 of the Pakistan Penal Code (PPC) entails the following:

Whoever, to the annoyance of others,

(a) does any obscene act in any public place, or

(b) sings, recites or utters any obscene songs, ballad or words, in or near any public place, shall be punished with imprisonment of either description for a term which may extend to three months, or with fine, or with both.”

I paused for a minute to mentally kick myself for laughing at a rumour about music being banned in public vehicles a couple of weeks ago. Suddenly, nothing seemed absurd enough to fall outside the realm of reality. I did not even attempt to delve into the mechanics of what constitutes as ‘obscene’ and who decides that, since the whole incident had bypassed reason and logic several minutes ago.

While I was still fuming with anger and going over the predictable rhetorical adult arguments in my head:

“What if he was my brother? We did not break any traffic laws, so why did they stop the car in the first place? What right did they have to stop and question us like that without any proof?”

I realised that the actual question here was:

“So what if he was NOT my brother? What right does any law enforcement member have to question your relation or motives if you are not violating any law or code of decency? Were a boy, a girl and a car enough evidence to turn someone into a suspect? How could morality, propriety and piety be judged based on a piece of paper?”

But, apparently it is not even a piece of paper that these guardians of law are looking for. As I narrated this incident to a friend, she told me that the same thing happened to her a few weeks ago as she was going back home with her husband. Only this time, the cops outrightly demanded to see the ‘bottle’.

“I showed them my wedding ring instead,” she said with a resigned smile.

Going back to the night, my friend and I drove the rest of the way in silence. As I was getting off the car, he said,

“You know when I got mugged last week, a police mobile was parked just at the end of that street. I didn’t think much of it then but now…”

He didn’t need to finish off his thought. The irony of the situation was not lost on either of us.

Have a story of your own? Share your experience with us at [email protected]