Did you know that Pakistan won the ODI series against India 8 days ago? 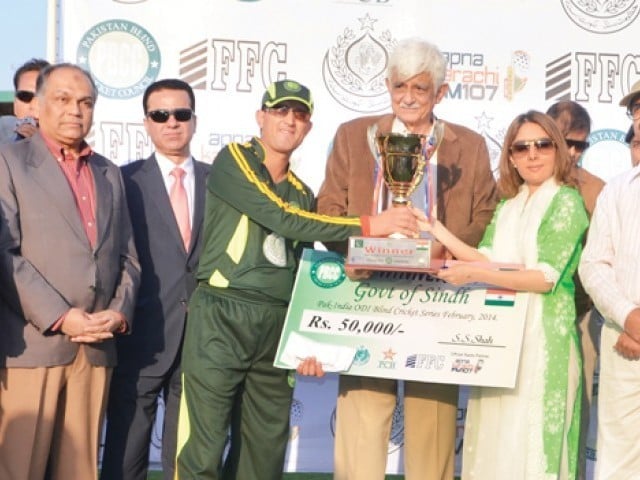 On February 23, 2014 the Indian cricket team had come to Pakistan despite prevailing security problems in the country. That seemed like it would be enough for the match to make headlines and draw crowds of spectators to the venue – the National Cricket Stadium in Karachi – but the crowd was thin and the media presence was non-existent.

In the third and final match of the three-day One Day International (ODI) series, Pakistan came up to bat after India had put up a target of 365 runs in 40 overs with nine batsmen out. Pakistan’s score picked up quickly and they were soon at 362 runs with only six out and three overs to go. The ball rolled towards the batsman and he swept the bat across the ground scoring a four and winning Pakistan the series (two-one).

Ball ‘rolled’ towards the batsman?

This was a blind cricket match.

Yes, I said blind cricket. Players on both teams are vision-impaired and yet they bat, they bowl and they even field. They run across the ground with such confidence that people are left guessing whether or not they are truly blind.

In fact, they even managed to fool one of the spectators.

My driver had attended the last hour of the match and when I asked him what he thought of the players, he said that they played well but he found it unusual that they were sweeping the bat and rolling the ball. He made no mention of them being blind and it occurred to me then that he had no idea that they couldn’t see.

As we had rushed to the match earlier that day, I had just handed him the ticket, forgetting to mention that this was a blind cricket match. In retrospect, that’s something I probably should have mentioned but his reaction when I told him was worth the initial confusion. It seemed to bother him even a day after the match when he randomly stated,

“No, I think you are wrong. There is no way they couldn’t see.”

Even now I think a part of him doesn’t believe me. And that is perhaps a testament to how well they played.

Of course, there are differences. The players roll the ball to each other instead of throwing it and sweep the bat across the ground to hit. Instead of playing in the air, they play on the ground, perhaps to make it easier to hear the ball as it rolls across the field. The ball itself is made of hard plastic and makes a sound similar to a rattle indicating where it is on the pitch. This is how the players determine where it is on the field.

The match has 40 overs instead of 50 and the field is slightly smaller as well. The players on each team fall into three categories – B1, B2 and B3. B1 players are completely blind, B2 are partially blind and B3 are partially sighted. There were four B1 players, three B2 players and four B3 players in this match.

The match was heavily guarded, with more police officers than spectators but this was not enough to pull down the players’ spirits. With music playing every time either team scored and a dhol wala (local drummer) joining in too, the stadium seemed a lot more crowded than it really was. And it was heart-warming to see people put their India-Pak rivalry aside and cheer for both teams.

While the music made the mood a lot more cheerful, it was evident that it was distracting for the players. Since they rely on their hearing to determine where the ball is, their fielding was affected by the sound. Every time the bowler was about to throw the ball, the umpire would ask everyone to be quiet and the few times that the crowd and musicians did not listen, it was apparent that the players had trouble figuring out where the ball was. At one point, a player even tripped while reaching for the ball as the dhol started to play but fortunately, he managed to find the ball.

In a wider sense, Pakistan does not have the appropriate facilities for people with disabilities. Moreover, the conduct of spectators is reflective of the lack of awareness we have as a nation. I was sad to see that such few people showed up to support the teams and the sport in general and I feel that as a society we should give more importance to events such as this one.

I admit that before last week, even I wasn’t aware that there was a sport called blind cricket but after watching just two matches, I’m bursting with pride that Pakistan did not only host the event, it also won the blind cricket series.

It is truly something incredible and something to be proud of.

A mathematician by choice, an economist via a fluke and a journalist through sheer force of will. Incisive and concise unless on caffeine.