How is Pakistan doing, you ask? Why don’t you ask the victims of Abbas Town? 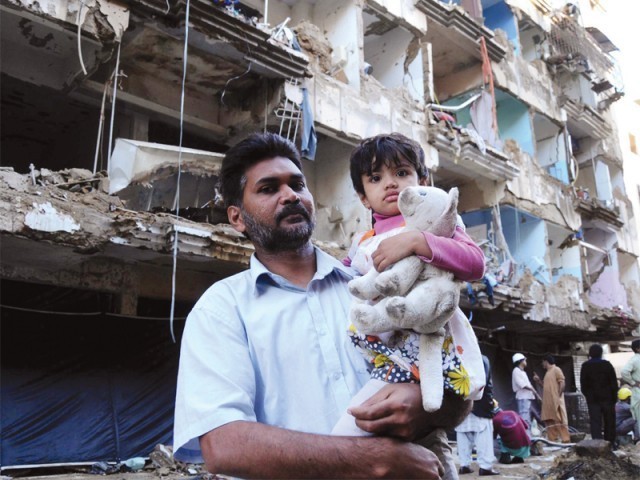 For the eyes lost in the mix of past and future, their little hands painting as they were being told to paint, they were and are the only ones who truly know how this country is doing. PHOTO: FILE

“Oh you’re from Pakistan? How is your country doing?”

Asked a classmate here at the London School of Economics (LSE) two weeks ago.

The question took me back to a different time… somewhere in the past, someday not too long ago, when I had gone with a few friends to visit a locality in Karachi called Abbas Town.

“This wall will fall unto this wall, this pillar on this pillar and then, we’ll all die…”

Said a little boy sitting on a plastic chair in a hall with paints on his hands. That was a normal conversation and imagination for him. He had lost his family members. Rephrase. He had seen his family members die right in front of him.

And when we asked these children to say ‘cheese’ for the camera, we were only met with sad smiles and lost eyes. It seemed as if they didn’t even know what was happening to them or they were the only ones in the room who knew. He seemed to be the only one who had seen, felt and knew how my country was doing.

It happened exactly one year ago.

It was March 3, 2013 when a residential area of Karachi was attacked leaving 48 dead and 180 injured. Among those who passed away were little kids who had gone to buy samosas from the corner shop, while some played cricket in the street and a few completed their homework in their rooms while watching cricket.

One of the kids had received head injuries and was in coma while his school tried to talk to the Cambridge Board for rescheduling his examinations. As legend has it for any genius, the injured was the school’s highest achiever.

I wonder how he is doing now. For his country, I wonder the same.

For the eyes lost in the mix of past and future, their little hands painting as they were being told, they were and are the only ones who truly know how this country is doing. For they do not have status updates and fancy debates to prove their point. No politics. No media. Just them and what they had seen.

I wonder how these kids will be disguised and fooled with fancy glossy pages of history books in the near future. How beautifully will history remove the stains of their family’s blood from its pages to narrate to them the beauties of this country.

While you and I will be sitting far off in some English, Australian or Canadian cafe, sipping coffee, reading about the news from the “motherland” and sympathising. It has been and it will be. Because you and I are not dying. Because it is not our battle. Because we don’t feel it.

We are the ambassadors for a country that we don’t represent.

And every single time we defend our country and cheerfully tell the world that our country is doing great, we commit another crime, an act of injustice. Every single defence that bubbles from the ‘elitist passion’ of nationalism is equal to murdering the right of expression of a kid who lost his brother in a terrorist attack on his own residence.

“Sultana, are you okay? I asked how your country is doing. All good?”

I come back to reality, shunning away the pains which haven’t hit me yet. And smile a broad smile telling the world that my country is doing just fine, that it’s not as dangerous as it seems on the media. I lie. Because that is what is expected of me, in this world, by this world. Forget the promises I made to those little kids, forget the conversations I struck with widows of the victims. Forget it all. That was just my part-time hobby. I exploited them for my token of emotion.

We are not scared; for the fearful at least run or react. We are in denial. We are dead. For anyone who fails to react to such brutal acts of terror in his own nation is not alive.

We quote Mandela, the Prophet, Hussain and Gandhi for validation, not because we mean it; because those who mean it don’t quote. They do.

The deceased from the terror attacks are more alive today than us.

And then, they ask me, how my country is doing.