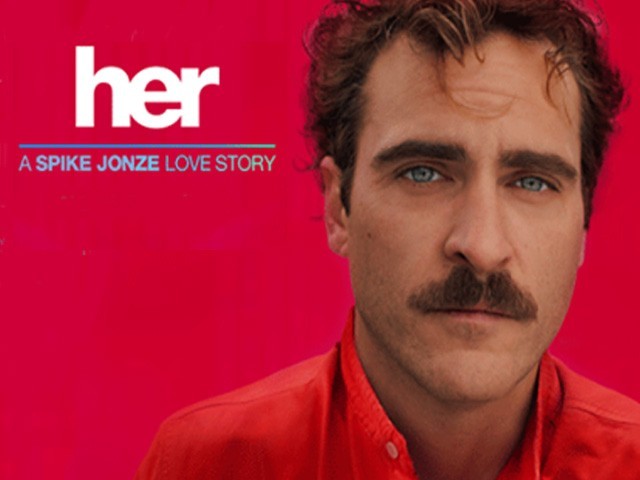 Her is nominated for five awards at the 2014 Oscars including Best Original Screenplay. PHOTO: HER FACEBOOK PAGE

In an era of re-boots ,superhero franchises and weak attempts at capturing the ‘essence’ of classics , very few films stand out as being relevant to the complexities and issues of the modern world . This year’s Oscar season crop has seen some improvement when it comes to directors and actors, old and new, engaging in challenging and thought provoking roles and issues.

While most people hotly debate whether Leonardo DiCaprio’s Oscar drought will end , whether the McConaissance movement will gain a major boost or whether Christian Bale has finally cracked the code to completely control body weight and mass , the modest underdog ‘Her’ seems poised to make waves at the big event .

And very rightly so.

While the sci-fi genre is usually frowned upon by the academy, Spike Jonze presents a pretty strong case in this complex drama-romance about computer-human interaction. In fact, given the way the world is progressing, this just might be the most important film for the future.

Set in 2025 , the movie focuses on Theodore Twombly (Joaquin Phoenix) , an introverted and slightly awkward greeting card composer , who is still reeling from the effects of a painful separation. Theodore lives a seemingly dull life until he discovers a new and remarkable operating system (OS), Samantha (Scarlett Johansson). Intrigued by this creation, he starts spending increasing amounts of time with her and eventually opens up to Samantha. Samantha, in turn, is equally intrigued, and as if on cue, the two fall in love.

The latter part of the movie traces their relationship over time and how they deal with the problems that arise out of such a liaison.

The movie is remarkably very different from others of the same genre. On one hand, it shows a very practical and realistic aspect of relationships while on the other hand, it is a chilling prophecy of what could happen. Samantha is basically a much more enhanced version of the current Siri, while most of the other technological innovations in the movie either exist in their most rudimentary forms or are proposed achievable targets for major companies.

While a Samantha OS replica may never be brought into existence, we are not far from the world portrayed in the movie.

Both Phoenix and Johansson deserve high praises for their performance. Known for his intense and controversial roles, Phoenix displays a softer side as a lonely, dazed and idealistic dreamer who only comes fully alive when he interacts with a computer.

Johansson’s portrayal as Samantha makes you forget that she is indeed simply an OS .The dialogue and the chemistry between the two leads is flawless, as the relationship progresses at a natural and almost dreamlike pace.

The cinematography, score and scene execution and progression is perfectly in sync with each other.

Her marks Jonze’s solo screenwriting debut and is nomination for an Oscar for Best Original Screenplay. In total, the film is nominated for five awards at the Oscars 2014. Surprisingly, neither Phoenix nor Johansson have been nominated for an award.

The film is currently playing in selected cinemas across Pakistan and due to the slightly controversial nature, is intended for a mature audience.

The author is currently studying at IBA (Karachi ) for a BBA degree . He has an avid interest in film culture , social issues , business and to an extent politics and society .