Don’t just fret about a channel you dislike, report it to PEMRA! 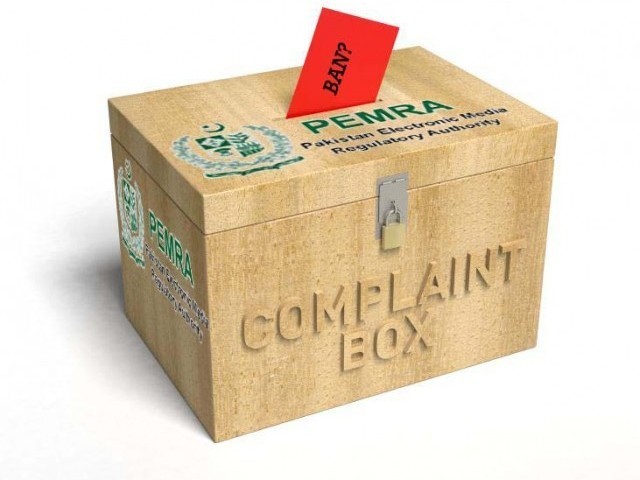 There are 27 complaints against Abb Tak on Pemra’s website, most of them expressing outrage towards the episode in which Uzma Tahir invaded the privacy of the transvestite couple. DESIGN: ERUM SHAIKH

Following the uproar caused by the controversial episode of Abb Tak’s show, Khufia, where the host, Uzma Tahir, forced entry into the home of a transvestite couple and tried to film their life, many viewers decided to display their outrage over various platforms: some expressed their anger over social media with the help of Facebook and Twitter; others wrote blogs that were published online on The Express Tribune’s blog page.

However, there were some that took a different route: many viewers decided to directly appeal to the Pakistan Electronic Media Regulatory Authority (PEMRA).

If one visits the official website of Pemra, there is a section under the tab ‘Complaints Call Centre’ labelled ‘View Complaints’. Upon clicking it, the website will direct the viewer to a particular page. This page will then show a list of channels and the number of complaints against them.

There are 27 complaints against Abb Tak on Pemra’s website, most of them expressing outrage towards the episode in question.

Following are a few of the complaints:

Complaint number 33387: “The show Khufia aired on December 15, 2013, was an infringement on privacy and was against basic human rights. Such shows in which the host harasses individuals, which have nothing to do with the public good, should not be allowed. Human rights and personal freedom should be protected by the state.”

Complaint number 33351: “I am disgusted by Abb Tak and their show which violated the basic human rights of people by barging into their homes and invading their privacy. The channel has also endangered the lives of innocent people and should be severely warned from such behaviour in the future. The channel should be heavily fined for its behaviour.”

Pemra therefore is providing a platform where angered citizens can lodge their complaints regarding anything that is being aired by Pakistani TV channels. The procedure for lodging complaints is also fairly simply. Under the ‘Complaints Call Centre’ tab is the tab for ‘Lodging of Complaints.’

This will open a page asking specifically for the medium one wishes to complain against. If the complaint is against a show on a television channel, then the ‘TV Channel’ button is to be clicked.

This will lead to a form that asks for the name, CNIC number, city and phone number of the complainant.

There is an optional box for anyone who wants to provide their email address as well. The next box will ask you to choose your channel. The form further asks for the specific complaint to be written in words, as well as suggestions for what action Pemra must take against the offenders.

So the next time you watch something on TV that is in violation of basic privacy rights, do complain about it and make your voice heard. It is your duty as a citizen to raise your voice as it is one way to create awareness.

A student of journalism and film production at Shaheed Zulfiqar Ali Bhutto Institute of Science and Technology (SZABIST) and a freelance writer who is currently the Project Associate for Mind Your Media (MYM), she tweets as @ManalFaheemKhan (twitter.com/ManalFaheemKhan)