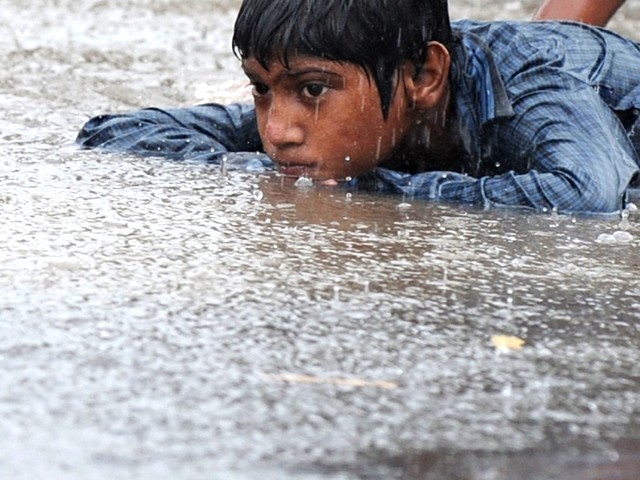 It is high time that all political parties fulfil their commitments to children’s rights, particularly their right to health, education and protection. PHOTO: AFP

The majority of us, particularly those in the power corridors, may not remember that 2013 was declared the ‘Year of Child Rights’ in Pakistan on November 20, 2012 by the then prime minister of Pakistan while speaking at a function to commemorate Universal Children’s Day.

Unfortunately, however, his government couldn’t take any tangible steps in the first two and half months of the year. 2013 was also the year of elections in Pakistan and we heard political parties share their programmes and manifestos with the masses and make commitments related to improving health, education, social protection and other social indicators.

This blog is an attempt to review the manifestos of Pakistan’s major political parties, specifically with reference to children’s right to health and protection, and to see if they have taken any steps to implement these after their election wins and forming governments at the federal and/or provincial levels.

PPPP, in its manifesto, declared public health to be a high priority and committed that,

“It will further consolidate the Lady Health Workers (LHWs) Programme”.

However, the LHWs are still running from pillar to post for the implementation of their regularisation. Similarly, their number has been capped till 2015 by the federal government. In Sindh, where the PPPP is in power, only 60% of the population is covered by LHWs and there are only 22,576 LHWs in the province which are not enough to cover the entire population.

The Sindh government should allocate budgetary allocation for the LHW programme at the provincial level and appoint more LHWs in line with its manifesto and the vision of their leader Mohtarma Benazir Bhutto Shaheed. This will be a significant step towards reducing infant, under-five and maternal mortality in the province and will address the malnutrition and population explosion related issues as well.

PTI highlighted “the present dismal state of women and children in terms of their access to healthcare, nutrition, and education”.

PTI is in power in Khyber Pakhtunkhwa (K-P) and is in a position to take necessary steps for the promotion and protection of children’s rights. The PTI government, in line with its manifesto, should increase the budgetary allocation for health and approve the K-P inter sectoral nutrition strategy.

To effectively respond to child health issues, the provincial government should also enact and implement the K-P Compulsory Immunisation Bill and the K-P Protection and Promotion of Breastfeeding Bill. The K-P government should also enact the Right to Free and Compulsory Education Bill to implement the Article 25-A of the Constitution about right to education for children five to 16 years of age. This will also have a positive effect on child protection, particularly reduction in child labour in the province. And the K-P government should make budgetary allocation for the implementation of the K-P Child Protection and Welfare Act 2010.

PML-N committed to increase the overall expenditure on health to 2% of the Gross Domestic Product (GDP), achieve 100% vaccination of children and 50% reduction in maternal and infant mortality by 2018. However, practical steps are still to be taken at the federal, Punjab and Balochistan levels where the PML-N is in power to implement its manifesto.

Health budget in the Federally Administered Tribal Areas (FATA) is still low and needs to be increased to be able to strengthen the health system in these areas. Last year’s measles outbreak in Punjab and Balochistan exposed the weak routine immunisation system in both provinces and highlighted the need for strengthening the system which will also ultimately lead to the sustainable eradication of the polio menace.

Although still weak and in its initial stages, both K-P and Sindh have child protection systems in place in the shape of the provincial child protection legislation and bodies. On the other hand, the Balochistan Child Protection and Welfare Bill has been pending since 2011 while in Punjab no such initiative has been taken as yet.

Similarly, there is no child protection system in the Islamabad Capital Territory (ICT) and a number of bills related to children’s rights are pending at the National Assembly level. The federal government needs to play its role to ensure enactment of the National Commission on the Rights of Children Bill, the Prohibition of Corporal Punishment Bill, the Child Marriages Restraint Amendment Bill and the Criminal Laws Amendment (Child Protection) Bill.

Furthermore, legislation should be enacted to implement a child protection system for the ICT while steps should be taken for the implementation of existing laws, that is, the Right to Free and Compulsory Education Act 2012, the Juvenile Justice System Ordinance 2000 and the Employment of Children Act 1991.

The recent global focus to accelerate progress towards achieving the Millennium Development Goals (MDGs), particularly during the UN General Assembly, also calls for more focus on areas related to mother and child health, nutrition, education and so forth, in all provinces. According to the findings of the National Nutrition Survey 2011, released in September 2013, malnutrition has become a key concern for the country. According to the United Nations Children’s Fund (UNICEF) 352,000 children die each year in Pakistan and an estimated 35% of these deaths are attributed to malnutrition.

However, one sees no urgency or commitment at the federal and provincial levels to respond to this situation by implementing strategies and increasing budgetary allocations. This is also evident from the fact that malnutrition indicators have not improved for almost four decades.

It is high time that all political parties who are in power fulfil their commitments to children’s rights, particularly their right to health, education and protection. In the post 18th Constitutional Amendment scenario, these areas fall under the domain of provinces.

The focus should be on areas which can bring concrete changes in key indicators. These include child and maternal mortality, vaccination ratio, nutrition indicators, health workers’ coverage, protection of children from abuse, exploitation and violence against children and above all policy, legislation and budgetary allocation for children.