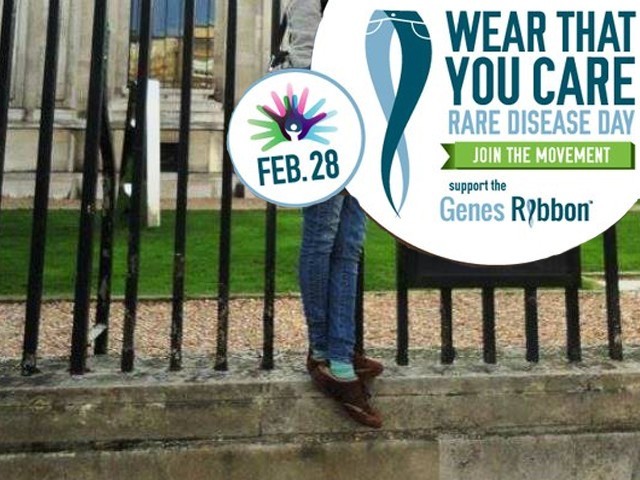 Rare and genetic diseases are known to affect 300 million people globally. However, in spite of this number more than 95 per cent of rare diseases do not have any drug treatment approved by the FDA.

My mother passed away exactly seven years ago. She had Huntington’s chorea which she fought for 15 years and it eventually took over her ability to talk, walk, speak and breathe.

Huntington’s disease is a neurodegenerative genetic disorder that affects muscle coordination and leads to cognitive decline. The disorder affects the brain and eventually damages mental and motor function and control. The word ‘chorea’ is a Greek word meaning dance since quick movements of the feet or hands are comparable to dancing. Disorders such as these are genetic which means that the patient’s offsprings have a 50% chance of inheriting them.

For children of parents with such rare and genetic diseases in Pakistan, I want to urge you to think and act beyond the limitations in our society. Do not let this 50% hold you back due to the fear of not being accepted, not finding the right partner or being considered inferior. Instead, use this knowledge and gene as your strength to work towards making a place for those who have been affected by these disorders. Use it as a voice to reach out to others who are suffering in your country and don’t have the support to help them realise that they are not alone.

My mother’s condition was an extremely rare one, due to which she suffered for as long as she did; the medications only able to slow down her movements but unable to treat her condition. This was because her condition, along with 6,999 other such conditions, was a rare and genetic disease.

Rare and genetic diseases are known to affect 300 million people globally. However, in spite of this number more than 95% of rare diseases do not have any drug treatment approved by the Food and Drug Administration (FDA) and only 400 treatments have been approved to this day for 7,000 known rare diseases.

According to estimates by the National Institute of Health (NIH), if the FDA continues to approve drugs at the current rate, it will take 10,000 years for there to be therapies and treatments for those suffering from rare and genetic diseases.

No one should have to suffer from a condition that can be treated and hence, something needs to be done. To speed this process up, everyone needs to get involved because if we choose not to, one in ten people suffering from a rare and genetic disease will die.

An annual observance is held on February 28 to raise awareness for rare and genetic diseases and to improve access to treatments and medical representation for individuals with these diseases as well as their families.

We need to raise awareness for these conditions because even though individually these rare diseases may have a small population, collectively the community of rare and genetic diseases is much larger than that of AIDS and cancer put together. However, in spite of this magnitude, only 15% of these rare communities have organisations or foundations that provide support or conduct the required research.

The ‘Wear That You Care Campaign’, taking place today, is an initiative of the Global Genes Project, which has been working to increase awareness of rare and genetic diseases, public and physician education, building community through social media and supporting research initiatives to find treatments and cures.

To support this cause, you can virtually take part in the ‘Wear That You Care’ campaign. All you have to do is slip into a blue pair of jeans or pin on a denim ribbon, take a picture of yourself and upload it to their Facebook page with the hashtag ‘WearThatYouCare’ (#WearThatYouCare).

I urge you to spread the word about this campaign – create awareness signs, post pictures on your timeline or make #WearThatYouCare your status. This will help raise awareness and hopefully, funds for research might follow.

Each one of us has the responsibility to create awareness about this cause since only this can lead to improved treatment and care options that will help save the lives of 300 million people suffering from rare and genetic diseases all over the world.

A visual artist, she is currently doing her M.A from the National College of Arts and is the president of Sooch Welfare Organization which educates the underprivileged youth of Pakistan and is currently working with the Global Genes Project. She tweets as @rabbiyaabdullah (twitter.com/rabbiyaabdullah)