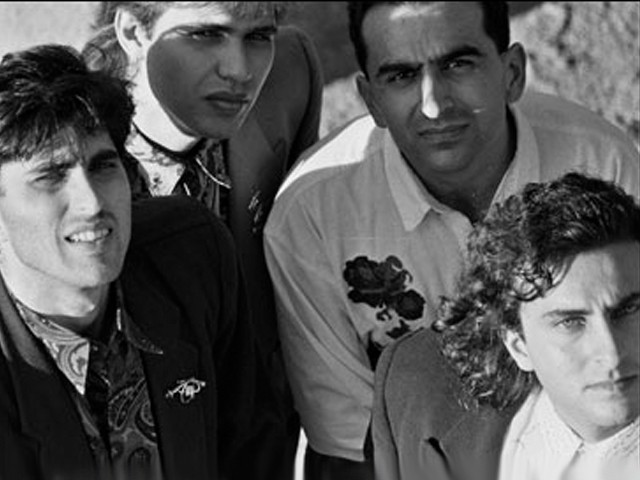 Vital Signs were not an unknown entity when the album came out. They had already left a permanent mark on our music history with the release of Dil Dil Pakistan in 1987. PHOTO: PUBLICITY

The generation that grew up listening to Atif has always associated Salman Ahmad with Junoon, completely oblivious to the fact that he was a part of Vital Signs first and had it not been for a bust up with Rohail Hyatt, Junoon might never have come into existence.

As pseudo-underground bands cover redundant black and death metal covers in the name of underground music, what most of these bands, and even a large chunk of our biggest musicians remain unaware of is the fact this year marks the 25th anniversary of one of the greatest pop albums released by a band from Pakistan – Vital Signs 1, released on March 1, 1989. While pop music was around before Vital Signs came around, no band in our history has been as influential as them.

Vital Signs 1 was released a year after Ziaul Haq’s hawkish dictatorship came to a sudden end. This was a time when the socio-political dynamics in the country were bursting with freedom and euphoria not witnessed since 1977. It was fitting that art take the forefront and even more fitting that pop music be the flag bearer of artistic freedom. Vital Signs were not an unknown entity when the album came out. They had already left a permanent mark on our music history with the release of Dil Dil Pakistan in 1987 which to this day remains the biggest patriotic song in Pakistan and the release of the album in 1989 only cemented the band’s credentials.

While Dil Dil Pakistan was the most popular song from the album, there were other songs on the track list which didn’t make it as big commercially, but still remain classics. ‘Yeh Shaam’ is the first such song. It was the longest song on the album, lasting over seven minutes, but its impact on our music industry lasted much longer. A ballad for the ages, the autumn brown harmony transcends time and transports you into a different world altogether. It remains without a shadow of a doubt, one of the best ballads our music industry has ever heard, and maybe even the very best.

‘Musafir’ and ‘Tum Mil Gaye’ add to the ocean blue mood created by ‘Yeh Shaam’. Not as brilliant as ‘Yeh Shaam’ maybe, but both still remain top drawer ballads where Junaid Jamshed manages to sing about long lost times and an unfulfilling empty romance, mesmerising the listener with every passing chord. Rohail’s synthesisers add to the melancholic ambience around the songs.

In ‘Gori’ you have one of the best feel good songs on the album. Salman Ahmad’s guitar playing is simple, but gets an A+ for sheer melodic value. Contrary to popular belief, this song was not celebrating women with fair complexions; it was a sarcastic take on women obsessed with it.

‘Chehra’ remains a personal favourite and the most underrated song on the album. Composed by ex-guitarist Nusrat Hussain with the lyrics taken from a poem by the late Parveen Shakir, the song has a very atmospheric feel to it, combining subtle tones of narcissism and giving a brilliantly pompous tone to it.

‘Do Pal Ka Jeevan’ lets the guitars loose and remains the one song on the album where Salman Ahmad was allowed to express himself best on guitars.

These two songs and to smaller extent ‘Pyar’, shifted from a keyboard dominated structure to one where Salman’s guitars played a bigger role.

‘Aankhen’ is another underrated song from the album. Rohail’s keyboard solo is superb, adding the slightest of brooding flavours to it. The song itself grows on you – not one that you instantly fall in love with. ‘Samjhana’ and ‘Yaadein’ are songs ensuring that ‘Gori’ isn’t the only feel good song on the album after ‘Dil Dil Pakistan’. Where ‘Samjhana’ makes for easy and wonderfully smooth listening, ‘Yaadein’ reminds you of classic wham.

When all is said and done, it probably has the most delightfully catchy harmony on the album. Last but certainly not the least, is the virtually unknown instrumental on the album titled ‘Samina’ which Salman wrote for his wife. In a land where instrumentals were unheard of before Aamir Zaki came around, it is a very interesting piece and does manage to strike an emotional chord.

The pop industry has become bigger since Vital Signs called it a day. However their contribution to the industry is immense, not just as a band but also as individual musicians. It is fair to say that they remain the greatest band we have produced, a notch above Junoon and light years ahead of every band that followed.

Vital Signs 1 is an album that should always be looked upon as the album that not only defined an era, but managed to set the rock solid commercial foundations of an entire industry.