Pink buses, pinkie rickshaws and extra-virgin airlines to the rescue! 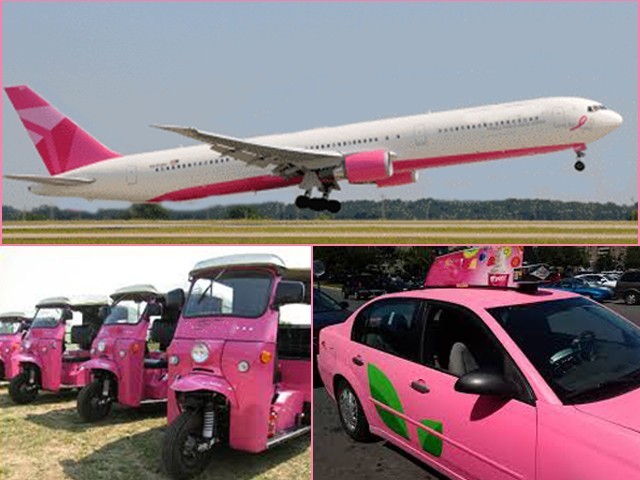 Why stop at pink buses? Why not launch a whole range of female-only transport to 'protect' our women from eve-teasers on land and in the skies?

So, we now have a women-only bus service. That makes sense. Given the piddling issues of mass unemployment, insecurity, a weak economy and the energy crisis, one can understand the government’s obsession with its favourite pastime – separation of the sexes.

I can even imagine the conversation that must have transpired.

Imagine this – a huge room dripping with opulence and accompanied with the usual smell of flop sweat that hangs in bureaucratic offices. Seated around the teak wood table are leading strategists, clad in crisp white shalwar kameez and shining pates. On the throne-like chair sits the head honcho, marked by the starchiest suit with a dome that shines like the moonlit pool of Shalimar Garden. The scintillating discussion must have gone something like this:

Minion 1: “Sir, we have some serious issues to discuss. It’s best if we finish the samosas and move on with them.”

Minion 2: “The major issue is the delay in tea.”

Minion 1: “Yes, but I am talking about electricity, insecurity and of course, the dushman mulk ki saazish (conspiracy of the enemy state).”

Minion 3: “This is useless stuff. What we should be concerned about is public transport. Specifically, the boring buses we have. We need a morale booster that delights voters, gives them a sense of security and resolves the issue of eve-teasing.”

Minion 4: “But we don’t have the budget for an awareness drive or the time for proper law enforcement. The budget is all gone in that youth festival and the kabaddi tournament. My constituents demand instant action!”

With this, he banged the table hard and knocked over the microphone.

Head Honcho: “Look here minions… I mean ministers. We can resolve all these issues with a single move. Roll out a women-only bus service. The female voters will be happy and it will be just the kind of populist move that will keep the masses occupied.”

Minion 1: “That’s perfect boss! We can paint it pink. My wife loves that colour so I assume that’s what all women want. But what happens before the women get on the bus or after they get off?”

Head Honcho: “That is beyond the scope of our jurisprudence.”

The Head Honcho, while reaching for a samosa, replied,

So, now we have a female-only bus painted pink.

What about the driver and the conductor? I was hoping that we could have a female driver who would cut lanes and play loud, raunchy songs accompanied by a wee lass conductor who would swing from the door and keep a five rupee coin behind her ear.

But why stop there? The worthy thinkers who floated this ‘brilliant’ idea should also consider all classes of female travellers. What about the females who take rickshaws?

Are they not in danger as well? I suggest the government should launch a line of female-only rickshaws or ‘Pinkies’ to give it a feminine twang. Imagine a troop of pink rickshaws, their silencers tuned to putter along with ‘Ay Hai Ay Hai’ and not ‘ruk tuk ruk tuk’.

Or instead of lines like Dekh Magar Pyar Se (Look but with love), they can have Mat Dekh Rishta Dey (Don’t look, just send a proposal).

Rickshaw drivers normally put a pithy line or two on their vehicle and the female drivers of the Pinkies could print poetry of Parveen Shakir and prose from Ismat Chughtai or Qurratulain Hyder to showcase their literary leanings and traverse the city as a vision of femininity and free verse.

Moving up the scale we could have taxis, also pink and free from all ‘male pollutants’. They will stop at designated ‘male-free zones’ such as the front of a fat-free ice cream shop and can also accept payment in Grey’s Anatomy DVDs.

So that takes care of road travel. But surely, our women fly too and the skies are full of eve-teasers. The government should partner with a local version of Howard Hughes and launch a female-only airline service. In a country named after purity and obsessed with heavenly virgins, the name ‘Virgin Airline’ would have been perfect but too bad Richard Branson beat us to it.

Still, no need to worry. We can do better and go with ‘Extra-Virgin Airways’, thus proving our ‘purer-than-pure’ credentials and safeguarding females from amorous creatures of the skies. I can almost imagine someone saying,

However, certain people might object to the curvy shape, streamlined sides and pleasant pink hues of an ‘Extra Virgin’ airplane. So, the best thing would be to move towards a zeppelin or an air craft with an amorphous shape so as to avoid exciting these individuals. If that does not work we can always drape a black billowy cloth over it with a slit for the pilot’s view to keep the planes modest and traditional. That will really safeguard the female travellers from the lascivious menfolk on the ground below.

And then, once travel is made secure for females, our worthy government can rest easy and get on to the issues of female-only malls, restaurants and public spaces. I can’t help but admire their vision and aesthetic sense.

After all, our roads do need a bit of colour and to reword Humphrey Bogart to suit our needs,

“This could be the start of a beautiful traffic jam.”