‘Eye for an eye’: Does capital punishment do justice or encourage vengeance? 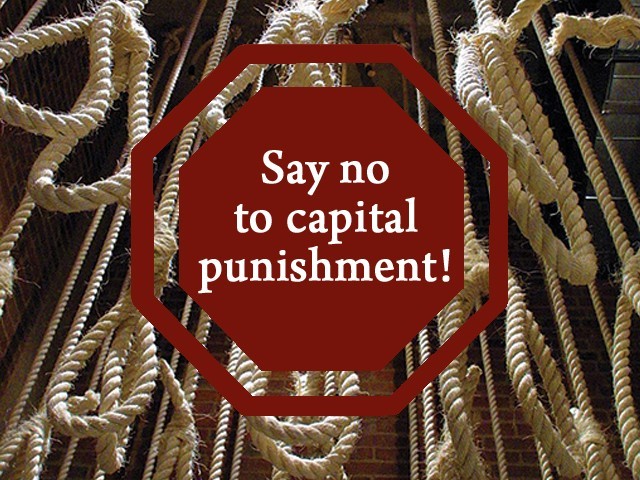 If the fear of death deterred terrorists from carrying out terrorist activities and criminals from committing crimes, would the few, mostly developing countries which practice death penalty still have the highest crime rates?

Around 140 countries have progressed to becoming abolitionist states in the last 65 years after the Universal Declaration of Human Rights (UDHR) was promulgated. Unsurprisingly, Pakistan oddly stands as a retentionist for over a dozen crimes including blasphemy, drug trafficking, kidnapping and adultery.

A sore reminder of this is the recent adjudication by an anti-terrorism court in Karachi that sentenced two men to seven and fourteen years imprisonment followed by a ‘to be hanged till death’ order. In a country that is deeply influenced by a strict and orthodox interpretation of the religion that the majority follows, are we ready for a debate on this controversy, let alone a moratorium or complete abolishment?

Champions of capital punishment often quote the ‘eye for an eye’ example. The criminal forfeits his right to life when he kills another man. It is assumed to be a deterrent in a society plagued by a flailing law and order situation enforced by faltering law enforcers. Closer to home, there is a certain interpretation of Shariah that governs not just the law but the society’s mind set at large. Questioning the man-made law and interpretation is tantamount to questioning God’s wisdom and dictate.

That the ‘eye for an eye’ mentality is hypocritical, even on the surface, is an understatement. By condemning a criminal to death for, say the ugliest crime of murder, the state acts no differently than him. He unlawfully takes the life of another for reasons he deems fit, while the state reacts similarly under the guise of ‘law’.

Resultantly, any chance of repentance is snatched from the criminal even before allowing it. The victim’s family may momentarily be satisfied by this ‘justice’ but does it not encourage vengeance and discourage tolerance and forgiveness? Under no circumstances can murder reproduce murder.

In an Islamic state like ours, capital punishment seems to have Shariah’s apparent nod to it. Several schools of thought exist to that effect and differences in the interpretation are many. Tariq Ramadan, Professor of Contemporary Islamic Studies at the Oxford University and Director of Research Center for Islamic Legislation and Ethics (CILE) aptly raises this point in his call for a moratorium on capital punishment. A discussion on this is almost non-existent by people who matter but can our state sit paralysed and continue to callously take the life of its own citizens?

If the fear of death deterred terrorists from carrying out terrorist activities and criminals from committing crimes, would the few – mostly developing – countries like Bangladesh, Iran, Pakistan and Somalia which practice death penalty still have the highest crime rates?

In comparison, Europe despite being abolitionist has the lowest crime rate and Canada’s has actually decreased after getting rid of capital punishment. Punitive actions are a superficial and extreme understanding of crime prevention. Rather, states that work for the welfare of their subjects and provide them quality of life are known to have the least criminal activities.

Our dilemma is that the judiciary which sends criminals to the death gallows and ensures their execution seems as helpless as the lawmakers to guarantee an impartial, just and speedy criminal justice system. Clichéd but a necessary example is that of Raymond Davis and Shahzaib. Qisas and Diyat laws, meant to encourage the virtues of forgiveness and patience, are used by the rich and mighty after unabashedly killing the poor and weak, further eroding our social fabric.

Justice or its lack thereof is sold to people who can afford it.

Personal and political agendas are furthered through the manipulation of capital punishment. Killers like Mumtaz Qadri are hailed as heroes while victims of discrimination and soft targets like Aasia Bibi rot in the confines of prison cells as each day the noose around their neck tightens till it eventually strangles them to death.

Perhaps, a complete abolishment of capital punishment may be a far cry until a consensus is reached by all stakeholders and the dispensers of justice set their house in order.

But can we at least expect a moratorium on all death penalties till then?