Highway: So much more than a love story 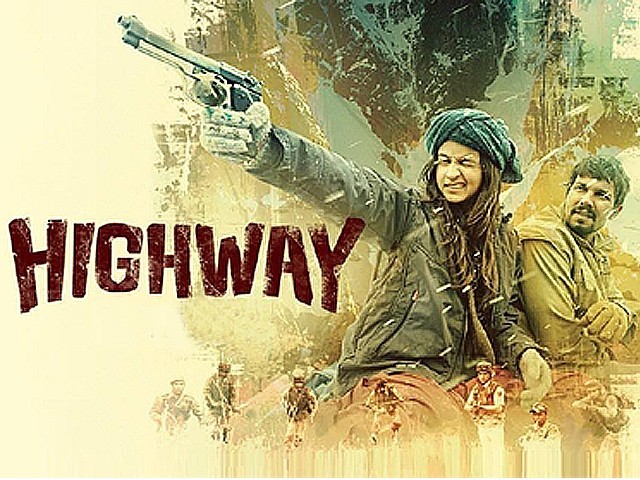 Although a film that sounds like just another love story, Highway has a lot more to offer when you come closer; a lot more substance, a lot more feel. PHOTO: OFFICIAL FACEBOOK PAGE (https://www.facebook.com/HighwayTheFilm)

I have the tendency to overanalyse an Imtiaz Ali film. I kept looking for Heer Ranjha in Rockstar and derived multiple interpretations from the coffee mugs of Love Aaj Kal. And then came Highway – an invitation card to find layer upon layer of symbols.

Although a film that sounds like just another love story based on Stockholm Syndrome from a distance, Highway has a lot more to offer when you come closer; a lot more substance, a lot more feel.

And definitely something a lot more important than a mere love story.

The question is, is it even a love story in the first place? The answer is no. Spoiler alert – the characters of the film are not in love and they never fall in love. Mahabir Bhati (Randeep Hooda) does not kidnap Veera Tripathi (Alia Bhatt); she only comes in his way. And then they embark on a journey of self-discovery through different states of the ‘real’ India.

When stopped by cops at a checkpoint, Veera hides. When Mahabir literally hands her over to the police, she flees as if she was the criminal.

Why is she confused?

Why is he handing her to the police?

Highway offers you all the possibilities of the way you want to look at the relationship of Veera and Mahabir.

Mahabir is like the father that Veera never had. He teaches her discipline when she runs away by saying,

(She has gone herself; she will come back herself too.)

And then, when she does come back, she asks for his permission the next morning before coming out of the room. He tells her to wear appropriate clothing, without showing any sign of chauvinism in his order. He buys her new clothes and gets worried when she climbs a tree – just like a concerned father.

On the other hand, Veera is like Mahabir’s mother whom he has left far behind. She talks to him in a ‘baby voice’ when he cries, sings him lullabies, plays with his hair when he sleeps in her lap and cooks for him. Her motherly instincts soar to the next level when she orders him to go see his real mother one day and he actually agrees to this order from his ‘mother-figure’.

Some might take Highway as a story of the evolution of two people. Mahabir is the catalyst of change that Veera needed in her life. He shows her a world she has never seen before – a world with mountains and open spaces – unlike her world where she used to feel claustrophobic. She is similar to Heer in Rockstar who wanted to see the world differently or like Agent Sterling in Silence of the Lambs who needed Hannibal Lectar to come out of her shell.

Veera, too, is a catalyst of change for Mahabir who had burnt all his boats. But Veera has a calming effect on him and as the story progresses, we see him smiling and looking increasingly free of the burdens he had been carrying on his shoulders and in his heart. It is obvious that she helps the tempest inside him to subside and he becomes a calmer soul.

There may be some who may see Highway as a ‘buddy movie’ where Veera becomes Mahabir’s buddy. Mahabir, a typical Imtiaz Ali hero, is confused and has no idea what he wants in life. Abhay Deol, Shahid Kapoor, Ranbir Kapoor and Saif Ali Khan, all have been directionless ‘Imtiaz Ali heroes’, until inadvertently, their female counterparts ‘show them the light’.

Mahabir is no different. In the beginning of the movie, he tells his gang leader that he is a dog and will die a dog’s death and then he succumbs himself to fate. Veera, on the other hand, makes it clear to Mahabir that she has no intention of marrying him or having babies. Even when he wraps his shawl around her or when she lies down on top of him to sleep, there is nothing sexual about it.

Alia Bhatt is only 20-years-old but she has given the performance of a lifetime in Highway, her second film. There are several scenes where she performs like a pro. Her monologues about talking too much, her run in the desert, her narration of her turmoil, her transformation and not to forget the climax where she quite literally steals the show.

This film has been the biggest break for Randeep Hooda as well. This is a film where his talent will not only be seen but appreciated and this is something he deserves.

The way he crumbles in the scene when Alia cooks for him is phenomenal. His hesitation and eagerness, his firmness and shyness are a work of absolute brilliance.

Imtiaz Ali has quite literally created a world of wonders in Highway. He steers the way you want to look at the film and his messages are symbolic as always.

In the scene when Veera hides from the cops, he warns the audience that if it is logic and sense they are looking for, they can leave. Alternatively, they can stay and like Veera, enjoy the fairy tale. Through her family, he symbolises real Bollywood masala cinema that wants to maintain the status quo and does not accept change; the cinema that is happy with Jai Ho and Gunday.

And then he thrusts an important point into the audiences’ face without any warning.

As Veera narrates her story to Mahabir, he stops eating as he listens to her and the audience also becomes uncomfortable in their seats and stop munching on their popcorn. And then he plays it sadistically smart when Mahabir narrates his story with Veera not even there. Veera never finds out why he was the way he was and her edginess is felt by the audience as well.

Although Imtiaz could have shortened the length of some sequences, spiced up the side characters and avoided the post-card ending of young Mahabir and Veera running around, these are minor complaints for an otherwise spellbinding experience.

By the end of the film, I was deeply satisfied with my journey on this highway. Even the air outside the theatre felt fresher.

This is Imtiaz Ali’s brand of Indian cinema. When the film ends, you will be confused whether you liked it or not.

But by the next morning, you will start liking the film and by the end of the week, it will become your favourite and you will want to see it again and again.