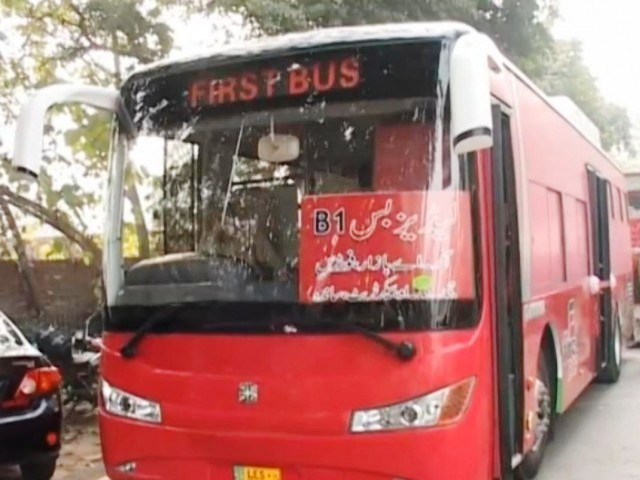 Although the effort is admirable and shows that the government’s thinking is on the right track, the solution, a Pink bus, is a complete sham. PHOTO: FILE

Recently in Lahore we were graced with the news of the arrival of our very own ‘Pink Bus’. The purpose of this bus is to rid, albeit momentarily, the female population from the roving eyes, slippery hands and insensitive tongues of the male population; to give women ‘harassment-free-travel’.

Although the effort is admirable and shows that the government’s thinking is on the right track, the solution, a Pink bus, is a complete sham. The mere fact that the authorities thought it appropriate to introduce something like this should actually offend women and yet we sit there smile, look pretty and let the big, tough, muscular men build walls around us to ‘protect’ us.

What happens when you get off the bus?

Or are you not supposed to get off the bus? Maybe you are supposed to be dropped off at your doorstep and are to dash inside to avoid coming in contact with the ‘harassing’ species? Perhaps we can introduce a house-on-wheels; at least we won’t have to meet any men who are not family and can still go out.

Oh but wait, the streets are crowded with men. There are men everywhere – how do we escape them?

Gosh, why did God do this to us?

It has, however, been discovered, whilst reviewing the progress of the bus, that the First Bus Service, the company that runs the Pink Bus, is not happy with its returns. They have blamed the Lahore Transport Company for a shoddy job with the ‘marketing’.

As sad as it may be for many, and as you may have already guessed, I was elated by the news. And no, it is not the marketing that is to be blamed.

They have planned to change the service from a ‘Ladies only’ transport to a ‘Family’ transport.

Pakistan – a country already in the stranglehold of various tags and labels – is one country that definitely does not need a Pink Bus.

We have labels for everything – gender, sect, religion, occupation, ideology, ethnicity, race – even nationality is a label each one of us carries. Take me, for example. I am sure that people would label me as a ‘girl’ (not a person), working as a ‘journalist’, who is a ‘Muslim’ living in ‘Pakistan’.

For the world at large, that would be my general description.

For Pakistanis viewing me, the labels would continue and I would be slotted into another bunch of categories. The dissection will turn me into a ‘liberal’ ‘Karachiite’ ‘Sindhi’ ‘woman’ who is ‘Sunni’ and works for the ‘media’. There are probably many other labels I would fall under – frankly I am a little relieved I can’t think of any others at the moment.

Each of these labels holds connotations that form a pigeonhole opinion about me.

This habit of dissecting individuals and placing them in little boxes of stereotype is one of the main problems in the world today. No individual is free from these labels and chains, and this is what stems the main problem of discrimination world over.

Instead of introducing cost-effective methods for empowering women, we are merely taking the convenient route out. Yes, the road to empowerment is long and steep but the long-term benefits far surpass this excuse of a solution.

Why is it that women have to be hoarded off, clumped together and concealed to overcome issues of harassment?

Is this not discriminatory?

Are we trying to show the world that Pakistani men are incapable of controlling their hands?

Or are we trying to show them that Pakistani women are not strong enough to face the world on their own?

Have we learnt nothing from history or the progressive world?

The mere fact that men and women can co-exist peacefully in other parts of the world should be indication enough that we are doing something wrong. Shoving women under curtains or stoning men who dare talk to women has not solved anything so far has it?

So, why increase the gender gap and separate the two so indistinctively?

Today it is just a separate bus; tomorrow we will require separate bus-stops, female drivers, women-only malls, conferences and even jobs.

What if a woman travels in the ordinary bus despite the pink bus being available? Will she be given another label too? Will she be called a woman with ‘loose morals’? What if an old man has no option but to travel by the pink bus one day, will he be offended to travel with a flock of women or will he be labelled a ‘rogue’ for travelling with women?

It is a Pandora’s Box of labels – it will never end.

If the idea of a man sitting near you is so repulsive, I don’t mean to be rude but, then walk it!

If a man tries to harass you, don’t complain about it – get up and do something about it. In a society like ours, the mere mention of a man upsetting a woman is enough to rile up a crowd in favour of the woman – then why this discriminatory sexist step?

Will we force our women into lives of dependency and insecurity forever?

Today there are many people who regret the very idea of a label being imposed on them – whether religious, ethnic, sexist or otherwise – and here, the government has gift-wrapped yet another chain of labels for women. With initiatives like the pink bus, we are inviting further prejudice.

I do not want to be tied down by more labels and I, for one, would not travel by the ‘Pink’ bus.

The writer is a News Editor at The Express Tribune and has an Undergraduate Degree in Law from the University of London. She tweets @shaikherum (twitter.com/shaikherum)

We have not forgotten APS and we will not forget Badaber

An interview with Moazzam Husain: We ‘discovered’ iron ore – what now?

Sleeping with the enemy