What did the US accomplish from the invasion of Afghanistan? 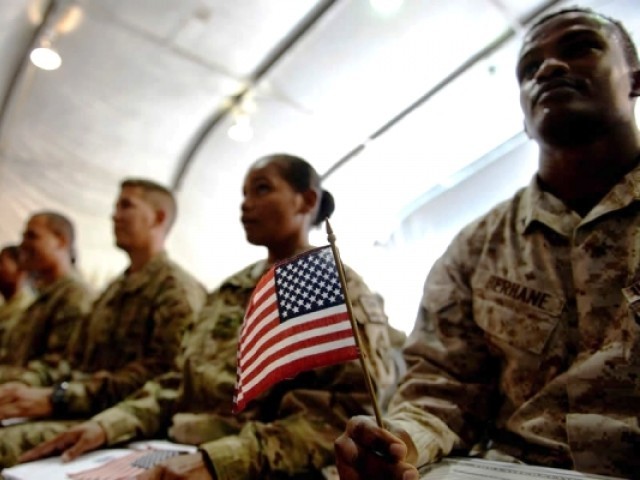 Afghanistan is still one of the world’s most impoverished nations and it has one of the highest numbers of internally and externally displaced refugees. PHOTO: AFP

The year 2014 has marked the start of NATO’s withdrawal of its combat troops from Afghanistan, 12 years after the war against al Qaeda and the Taliban began, in the autumn of 2001.

Many explanations were given as to why the invasion of Afghanistan was vital – from the necessity of finding and punishing the perpetrators of 9/11, to liberating Afghan women and eradicating the opium trade. Time and again, politicians and the media tried to legitimise the war in the eyes of the public.

We were told in the weeks following 9/11 that the invasion was an act of self-defence, by former US president George W Bush and his administration; they stressed that it was not a retaliatory move. Whether the invasion was legally or morally justified is a lengthy and time consuming affair, but whether it has been a success can be determined by the facts.

There seems to be little in the way of positive things to say about the perceived ‘accomplishment’ of the invasion. Yes, the Taliban’s grasp on power in Afghanistan’s major cities is dwindling and, in these cities, there is more freedom available to women who would otherwise be confined to their homes. We find that there is a greater opportunity for girls to pursue an education in these cities, than elsewhere in the country but, unfortunately, this is where all commendation of Nato’s endeavours end.

There has been an exponentially sharp rise in the production of opium, despite offers of ‘subsidies’ given to farmers who refrain from producing opium. This is hardly an appealing offer, if the yield of opium and the optimum climate Afghanistan provides for its cultivation is taken into consideration, as well as the vast profit that can be made from it.

The Taliban’s hold on the south has also been hard to remove. British forces have suffered severe casualties in both Kandahar and Helmand provinces as of late, and in Herat province the Taliban still have a lofty presence.

One could argue that the whole operation has been in vain, as Osama bin Laden was killed almost 10 years after the invasion of Afghanistan. Bin Laden was not found in the Hindu Kush Mountains between Afghanistan and Pakistan, where US intelligence thought he was hiding, but rather in the quiet and scenic area of northern Pakistan.

Similarly, now that the US is intent on dialogue with the Taliban, it begs the question, were such draconian steps necessary in combating extremism in the first instance?

Add this to al Qaeda’s ever-growing presence in Yemen, Syria and the Maghreb region, and the whole operation seems futile. However, lambasting the invasion itself won’t do much to solve problems on the ground for the average, working Afghan.

Afghanistan is still one of the world’s most impoverished nations and it has one of the highest numbers of internally and externally displaced refugees. The level of literacy is still extremely low and the country ranks high on global corruption indexes.

But funnelling funds into the country in the form of aid projects won’t rectify these problems, if the head honchos in Kabul are not held accountable for any aid-related discrepancies. Similarly, neglecting the need for more female medical practitioners, who can help solve the country’s high mortality rate, partly due to the lack of education available to women, will not lead to much progress.

The education crisis facing Afghanistan’s women will not be solved, unless the government looks to advise rural communities about its importance and necessity for the growth and prosperity of Afghanistan.

Afghans themselves also need to make a concerted effort to form a unified Afghanistan, where a Pakhtun is not superior over an Uzbek, nor an Uzbek or Tajik over a Hazara. This way of thinking needs to become a priority for Afghan politicians, especially those running for the general election this year, as well as for the high-ranking military personnel.

Afghans need to be considered an integral part of Afghanistan and they should feel a sense of brotherhood and belonging. This will go a long way in preventing a repeat of the bloody civil war, which ravaged the country in the 1990s.

Having noted the above, it is very simple to just write off Afghanistan as a ‘failed state’, without contextualising the reasons as to why the country is in turmoil. It is essential to analyse these reasons in order to understand which mechanisms should be implemented to allow for Afghanistan and its people to flourish.

If the years of colonialist meddling, attempted land grabbing, insincerity from neighbouring countries and corruption within the Afghan establishment are considered and acknowledged as contributory factors to blame for Afghanistan’s current state, it becomes easier to comprehend why Afghanistan is still finding its feet and struggling to blossom into the free and prosperous country its people long for it to be.

A British Kashmiri law student, with an interest in Afghanistan and Central Asia. As of September she will be undertaking an MA in Human Rights Law. She tweets @RabiaKashmiri (twitter.com/RabiaKashmiri)