Don’t forget our police jawans, they are the real heroes! 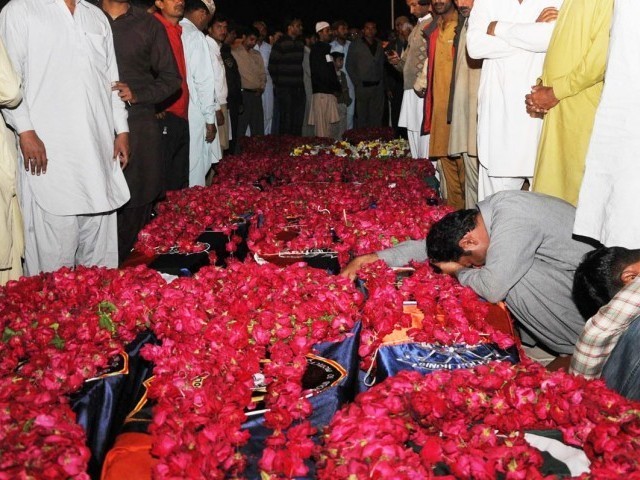 When their sacrifice is no less than that of a jawan wearing an Army uniform, we shouldn’t exhibit any ignorance towards them and celebrate them the same way as heroes are meant to be celebrated. PHOTO: FILE

I would like to thank everyone for spreading and sharing the word about Ibtihaj when he visited Karachi for his treatment. He was a little boy who ended up being a victim of terrorism. He smiled through his pain and misery and gave us hope. We rallied up behind him and celebrated him as a hero and rightfully so.

However, there is a group of men in Pakistan who, by their very job description, fill in the category of heroes but they don’t get the adoration, love and respect. In these times, when we are at war or at least living in war-like conditions, this group of men stand guard at all sensitive locations risking their lives every day as part of their everyday job thinking of it as a normal routine just so that we can stay busy with ease in our normal everyday lives.

I am referring to the policemen of our country who come under attack almost every day in order to protect us.

The polio team is attacked, a police man dies.

A hospital is attacked, a police man dies.

A school is attacked, a police man dies.

A cinema is attacked, a police man dies.

They stand guard on all soft targets knowing very well the danger.

And sometimes they themselves, either at their check posts or in their training academy, are targeted directly just to bring their morale down but they stand right back up and fulfil their duties to protect us the next morning.

In the last 10 years, our police officials have buried over thousands of their brothers. The government announces compensation for their families but in majority of the cases, they don’t even get that unless they agree to some kickbacks for the government.

When Nawaz Sharif, Imran Khan, Bilawal Bhutto, Munawar Hassan and Fazlur Rehman ponder over whether to indulge in talks or go for military operations, it is the life of a policeman that remains under constant threat. But until the government gets any sense of direction, who will look out for the lives of our policemen and their families?

The attack on February 13 by the TTP in Karachi claimed the lives of 13 police jawans and injured 57, including civilians.

The injured have been admitted to PNS Shifa, Liaquat National, Agha Khan and the police hospital in Garden. I urge you all to take a little time out of your busy schedule over the weekend and bring along flowers or if nothing else then at least a smile for our original heroes; those who have signed up their own lives to protect ours. Let them know that we won’t just dismiss them as corrupt officials but that we care and respect their services and sacrifices. Let them know we are proud of them.

When their sacrifice is no less than that of a jawan wearing an army uniform, we shouldn’t exhibit any ignorance towards them and celebrate them the same way heroes are meant to be celebrated.

It remains to be seen how quick the Sindh government will act to ensure that the families of the martyrs get due compensation and privileges. Especially since, our ministers shamelessly brandish their tinted Prados whilst being securely guarded by these very jawans.

In these times of insecurity and terror threats, our VIPs owe their safety, peace of mind and sanity to our jawans. One sincerely hopes they realise this.