Umar Akmal: A great player but a bitter citizen? 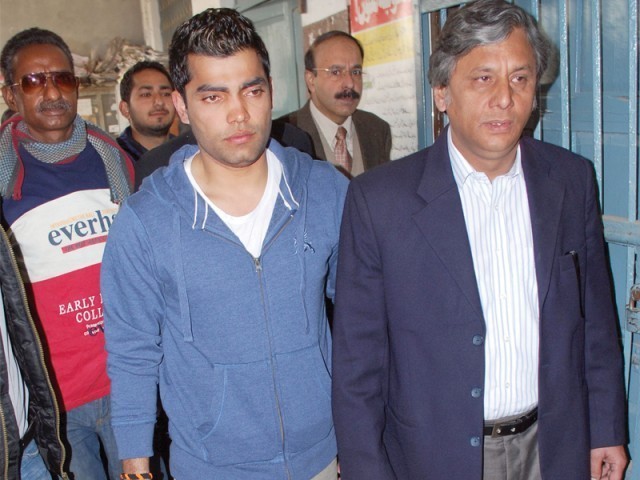 Umar's father was very criticial about the behaviour of the police towards his son. He should be asked if a nation’s heroes act in such a depraved manner, what impression would they create in the international arena? PHOTO: AFP

Umar Akmal became the subject of much debate because of his recent run-in with the police. He violated traffic rules by going through a red light and when stopped by the police, he tried to bully the traffic warden by flaunting his stature of being an international sportsman.

Yes, he is a talented player but in this one incident, he proved himself to be a careless and nasty citizen. As a result of his actions, Akmal has been booked under Sections 186, 279 and 353 of the Pakistan Penal Code. According to police reports, the 23-year-old Akmal did not stop at a traffic signal in the commercial Firdous Market area in Lahore and then engaged in a scuffle with a traffic warden when he was stopped for violating the rules.

The Assistant Superintendent of police in Gulberg, Zahid Nawaz, briefly stated to the reporters,

“Three wardens tried to stop him after he violated a traffic signal but he did not. When he finally stopped, he scuffled with a warden and tore his uniform. Umar is under arrest and a case has been filed against him.”

After spending 12 hours under police detention, Akmal was released on bail. When asked about his version of the incident, he told ARY News,

“I had first moved the application against the sergeant and they have registered a case against me.”

“The warden hit me on my face and you can see the wounds. I came to the police station myself with a request to control the wardens who misbehave with people. Instead the police have registered a case against me.”

When Nawaz was questioned about Akmal’s claims of undue violence and misbehaviour, he denied the claims saying,

“I have done the inquiry and no such thing happened.”

Akmal’s father also had something to say about his son’s arrest,

“When our own people insult our national heroes then the rest of the world will also do this. It’s insulting and unacceptable.”

Perhaps, Umar’s father should be asked in return that, if a nation’s hero acts in such a depraved manner, what would the people of the world think? It is highly shameful for the nation as a whole when its celebrities and famed personalities – who are supposed to be the representatives of the people in the international arena – act in such an unacceptable manner.

Akmal has played 16 Test matches, 89 One Day Internationals (ODI) and 52 T2os for Pakistan in a career that began in the year 2009. There is no debate on Akmal’s talent as a cricketer and his rising stardom in Pakistani cricket. And I completely agree with his father’s statement that no one has the right to humiliate and discriminate against a national hero but based on the facts of the case, I would say that if national heroes act like this, what is the nation supposed to do?

I saw the video telecast of Umar Akmal in which he was abusing the policeman recklessly. In fact, it shook me to the core since he had been a great source of inspiration for me until then.

Obviously people have varying opinions regarding the incident. Some people may accuse the police of being aggressive while others may argue that Akmal was not the only one who acted in such a way. They would claim that many people get aggressive with the police.

But the difference is that they are not national heroes.

It would be better if all of us would consider the facts and refrain from letting our favouritism rule over our better judgement.

In my opinion, this incident is a colossal damage to the nation’s image. Akmal has not only damaged his own image, he has, in fact, let down the entire nation. In addition, he has set a poor example for the entire nation.

Who will aspire to be a good, law-abiding citizen when they see their role models acting this way?

Unfortunately, such behaviour has become the norm for our rulers, politicians and all people in power. These people do not promote a law-abiding culture in the country and its effects can be seen in the increasing disregard our masses have towards the law.

Our celebrities, politicians and famed personalities need to realise that such incidents will not help a nation which already has a poor image in the rest of the world.

A student of BS Electrical Engineering from UMT, he likes to analyse happenings and loves to express his opinion through writing. His hobbies include playing cricket and studying.