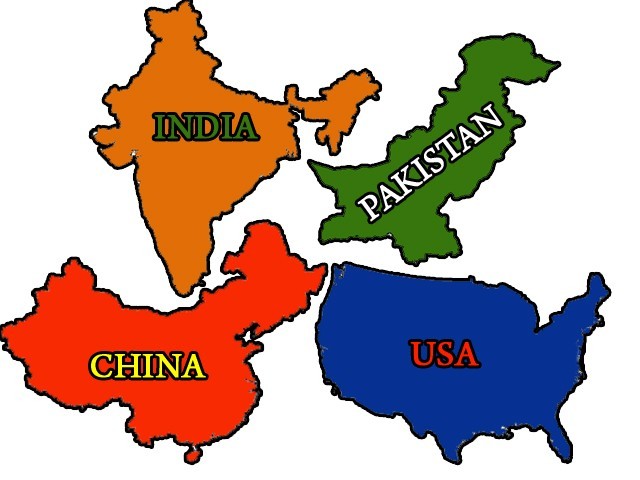 Foreign relations are not made on the basis of friendships. Pakistan's progress depends upon Pakistanis. I believe that we have lost pride in being Pakistanis. This pride needs to be reclaimed.

India no longer considers Pakistan a threat. Let’s face it. India is poised to become a global economic engine; its economy is the 10th largest and third by Purchasing Power Parity. India is a member of the G4 and has recently acquired almost absolute control of the International Cricket Council (ICC).

Having a G4 membership alone raises India’s global influence. Further, the day is near when India would be a permanent member in the UN Security Council. India played its cards well and is a potential super-power. It is time for Pakistan to come out of its shell of denial and recognise India’s swift progression.

Pakistanis are often found lamenting when India is offered a better deal by the US. The tendency of the West to prefer India has irked me for the longest of times. Nonetheless, when I analyse it rationally, I find asking myself,

“Why would they have it any other way?”

India has proven its mettle across diverse sectors of national importance.

So, why should it, then, not be offered a better package than us?

Further, given our all too frequent anti-US rhetoric, we should be grateful that the US still provides us abundantly, which in return sustains a big chunk of Pakistan.

Rationally speaking, whatever interest India may have had in the past to invade Pakistan is probably now lost. Now India is a lucrative business destination for many, including the US, and has repositioned itself as a competitor on a global level. With Indians stationed at key places globally, Indian leaders have re-imagined the world where the epicentre of power (economically at least) is India.

This dream may be far off but is certainly not far-fetched.

Subsequently, it is not in India’s strategic interests to continue to apportion defence budgets to fight a war with Pakistan in the hopes of an invasion – more so when Pakistan is in the midst of the worst crisis inflicted by rapid radicalisation of society.

In the same way, Pakistan must reduce the combatant engagement reserved for a war with India because it serves no other purpose but to satisfy inflated egos. National sovereignty is vital, yes, but it is important to realise that India has upped the ante and has no strategic advantage by conquering Pakistan – as many would have us believe.

The money spent fighting India could be spent elsewhere more productive; besides that, a peaceful South Asia is in everybody’s interest. It would be great and to the benefit of both the nations, if India and Pakistan were to reach a trade agreement like the North American Free Trade Agreement (NAFTA) and opened borders for tourism and trade.

If Pakistan has an enemy it is not India it is the wretched forces of extremism that have wreaked havoc on a typical Pakistani’s lifestyle.

Myth 2: US wants to take over Pakistan’s territory

Blasting the US is another classic.

Apart from all the controversy theories, some of which can naturally be true as well since there is always a one percent chance of them being true, the US is more our friend than we may realise. Contrary to popular belief, the US probably has no desire to gain territorial control over Pakistan, especially when it exercises so much indirect control anyway.

Projects such as the Pakistan Poverty Alleviation Fund (PPAF), US help during the floods and other aid should be taken in a positive context. The fact that the government does not ensure that all the foreign aid is put to productive causes, is our fault, not that of the US.

Myth 3: China will help Pakistan, no matter what

Our third misconception is about the Pak-China relations.

Yes, China has proven a steadfast ally for Pakistan. However, numerous analysts portray China as an ally that can always be trusted upon – no matter what the circumstances. This line of reasoning is absolutely incorrect and fails to account for the bilateral nature of national relations.

I do not want to portray China in a negative context, for that is not my intent, but the intent is for us to realise that there are benefits that China has by being our ally. Their main competition in the region is India and Pakistan’s historical relations with India positions Pakistan as an ally from a Chinese perspective. I admit this reasoning is rather simplistic, but that is just how it is. And, there is nothing morally wrong with it either.

I believe that more than just economic and social indicators, we seem to have lost pride in being Pakistanis. This pride needs to be reignited. With news reports saying it has become controversial to play the national anthem at certain schools, it is no wonder we have lost the Pakistani sense of pride we once carried.

We need to start investing more in education and health, not our defence budget. That is the only way to eliminate the vicious cycle of terrorism, low standards of living and dwindling infrastructure.