MQM: Misunderstood even after 30 years 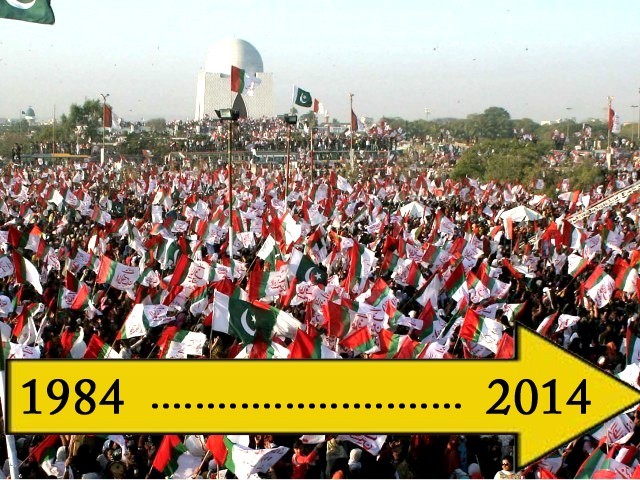 It has been 30 years since chants of “Jiye Muttahida!” were first heard across urban Sindh. It is high time that the rest of Pakistan tries to understand the positive side of MQM.

On March 18, 1984 the first political entity for the Mohajirs called the All Pakistan Mohajir Student Organisation (APMSO) evolved into a full-fledged political party now known as the Mohajir Qaumi Movement (MQM).

The party was renamed to Muttahida Qaumi Movement in 1997. And tomorrow, March 18, 2014 it will be exactly 30 years since the MQM came into existence. However, the question remains – out of all political parties in Pakistan, why is the most intensely negative judgement directed towards the MQM?

There is no simple answer to this question. However, in order to get to the crux of the issue, one needs to take a trip back in history and understand the discrimination faced by the Urdu speaking Mohajirs in Karachi, after partition. There were a multitude of events that the anti-MQM segment of our country has either never heard or never read of in detail because of their inherent biasness towards the party.

One very prominent event among these was the presidential election in 1964 when Gohar Ayub, son of Ayub Khan, carried out a series of attacks against the Mohajirs because of their support to Fatima Jinnah. Like any segment of society at the receiving end of an ethnic bias, the Mohajirs resisted and made their voices heard via a political platform led by Altaf Hussain. This was the birth of the APMSO in 1978.

Other arguments used against the MQM include the Jinnahpur conspiracy, even though some senior personnel of the Pakistan Army would argue that the whole thing was cooked up only as an excuse to carry out a military operation against the MQM in the form of the now infamous Operation CleanUp.

Some argue over MQM’s militant wing and its continuous use of violent force, while yet another argument is the permanent presence of Altaf Hussain – the party founder and leader – on non-Pakistani soil. In the midst of the entire anti-MQM hoopla however, what is conveniently forgotten is the impact the party has had in urban Sindh and in shaping our national politics.

For starters, MQM remains the only major political party in our history that was not formed by the establishment. It is a classic example of a political party which came into being at the grass root level by an average person; the man in question here being none other than Altaf Hussain. In a country which has always been dominated by the military, this is a phenomenal achievement and one that is cruelly overlooked ever so often.

Moreover, despite all allegations of militancy and violence, MQM enjoys a very strong vote bank in Karachi and Hyderabad. Back when PTI was drawing large crowds during the 2013 elections build up, its supporters would rebuff claims of the establishment’s support to PTI by claiming that establishment support does not gather magnanimous crowds the way PTI did in its Karachi and Lahore rallies. Using the same argument against the anti-MQM segment, violence and intimidation does not develop a rock solid vote bank the way MQM has developed over the years.

It takes effort and the MQM vote bank is based on the sheer effort of its people to ensure that minority rights in urban Sindh are not trampled. A party that was formed to protect the interests of Mohajirs, it has now evolved and taken other minorities under its wings as well. In a country where minorities have always been persecuted, MQM has managed to hold its own against a barrage of criticism, turning into a political entity yielding significant influence over the federal government due to its mobilisation power in Karachi. For a political party to maintain such an impact over not only Pakistan’s largest but its most ethnically and linguistically diverse city, is yet another achievement of the MQM.

It was after MQM’s victory in Karachi in the 2005 elections that the brilliant Mustafa Kamal was appointed mayor of the city and the Foreign Policy magazine named him Mayor of the Moment in 2008. He was also shortlisted for the World Mayor Prize in 2010 – a rare and proud moment for Pakistan in dark times.

And of course, MQM must be commended for maintaining its stance as a liberal and secular party. In a country where the use and abuse of religion has become the norm in our political circles, MQM has maintained its admirable position of remaining secular and not letting the bigoted, conservative segments of our society dictate terms to it in any manner.

It has been 30 years since chants of “Jiye Muttahida!” (Hail MQM) were first heard across urban Sindh. It is high time that the rest of Pakistan tries to understand the positive side of MQM.

It may not be the second coming of Jesus but it is hardly the devil either.