Ravindra Jadeja might be ‘the next Wasim Akram’, what a joke! 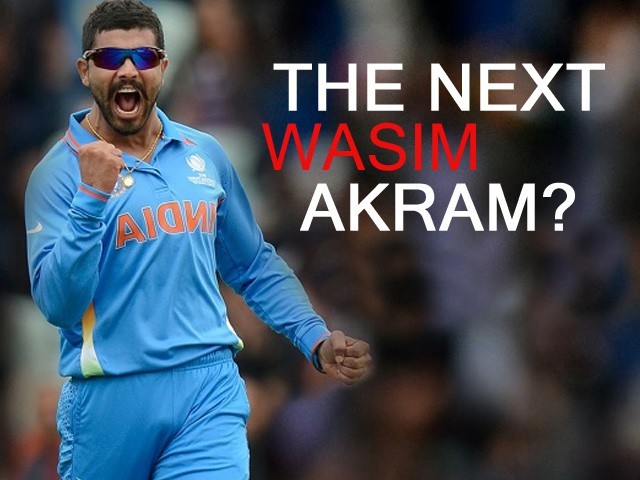 How a spinner can be compared to one of the greatest pace bowlers the international cricket has ever seen?

It was very awkward for me when I saw a picture of Ravindra Jadeja on a magazine cover with ‘The next Wasim Akram?’ written on top of it. Indian Bowling coach, Joe Dawes gave a statement after losing the second Test match against South Africa that he may try to make Jadeja the new Wasim Akram.

His statement implicated that Jadeja should practice some seam bowling as previously done by Sourav Ganguly or Sachin Tendulkar.

The first thing that disturbed me was how a spinner can be compared to one of the greatest pace bowlers the international cricket has ever seen. If anything, I personally think Sanath Jayasuria would have been a better choice as he was a left arm slow bowler and a master blaster. However, Jaya’s class is unmatchable when it comes to his batting talent.

The second thing that popped up in my mind was the numerous times Indians have choked their talented cricketers by comparing them with Pakistani greats. Irfan Pathan is a prime example who had some real pace bowling talent, but he was forced by his coaches to make his action identical to Akram, which ended up neutralising his natural talent.

To add to the cause, the Indian team insists on putting all 11 of their players behind the bat and force Pathan to be an all-rounder, which is a big loss on their behalf.

Coming back to Jadeja and his coach’s statement, even if we ignore the fact that a spinner is being compared to a pacer and only focus on their performance, he is being compared to the legend on the basis of his wicket taking ability in the away matches. Jadeja has only played one Test match against the Proteas in their backyard and got six wickets for 154 runs. As Jadeja has not played much of the long format cricket outside India, his record cannot be compared to Akram’s record of 255 wickets in 62 matches with an average of 24.61.

Let’s take a look at the performances of the most played format in international cricket; One Day Internationals (ODIs). Jadeja has played 36 away matches and has hunt down 28 batsmen at an average of 48.53. Whereas, the Sultan of Swing has taken part in 121 away matches and has taken 168 wickets at an average of 23.89. Akram has never bowled in a T20 format, so it is irrelevant to compare the records. However, if he had played, he must have better figures than Jadeja for sure.

The only way Akram and Jadeja can stand side by side is if you highly overrate Jadeja as the greatest slow left arm bowler of all time. I have no doubt that many Jadeja fans might believe that he is the best left arm orthodox spinner of this era or probably in history, but I rate Abdul Razzak of Bangladesh higher than him and even young Raza Hasan of Pakistan even though he hasn’t played much international cricket. Hasan is immensely talented and soon he will prove it to the world.

On the other hand, there is absolutely no doubt that Akram is the best left arm pacer or left bowler that has ever appeared on the field. Seeing the comparison above, I reckon Jadeja has a long way to go to even have his name mentioned alongside the Sultan of Swing.

Dawes’s statement is probably one of the most overrated and perhaps one of the most absurd statements that the cricketing world has ever heard. There is indeed no comparison between the two. Such statements usually end up destroying players and their talent rather than building it.